Analog electronics plays an important role in modernization of any electrical or electronic system.  In designing of analog electronic circuit’s power consumption problem is very important and oldest one. Its objective function is highly nonlinear due real-world input-output characteristics, which directly cannot be solved by the conventional optimization methods.  This paper deals with application of Artificial Intelligence (AI) based algorithms to solve this problem in an efficient manner viz. genetic algorithm (GA), particle swarm optimization (PSO) and hybrid algorithm. Problem is formulated by basic laws of analog electronics. A common-emitter amplifier circuit is used for implementation of power consumption problem. Frequency response analysis and minimized power consumption in the circuit is given with a set of optimal values of circuit parameters. The composite results demonstrate the potential of hybrid algorithm to solve the highly non-linear function of power consumption minimization.

Today we are living in electronics world. Analog electronics are electronic systems with a continuously variable signal, in contrast to digital electronics where signals usually take only two levels. Although we usually convert the analog information for processing or storage into digital media, we essentially create and consume information in analog domain. Analog circuits can be very elegant designs with many components or they can be very simple. Analog circuit design was developed four decades ago but it is still infancy compared of digital design. In modern days use of analog circuit is increasing day by day, so we need high degree of reliability and accuracy. For the analog design problems, new techniques are developed. Many of these techniques have been based on intelligent system such as logic, neural networks etc. So we need minimization of electronic circuit to increase the system reliability and accuracy and also we need to reduce the value of component as well as the power consumption in circuits. Optimization of circuit is necessary for this purpose.

Optimization is a branch of computational science which can be defined as the process of finding the best solution for a problem (Wang et al., 2018). Over the years, many efforts have been made to solve this problem, incorporating different kinds of constraints or multiple objectives through various mathematical programming and optimization techniques. The conventional methods include Newton- Raphson method, Lambda iteration method, Gradient method etc. The input/output characteristics of modern units are inherently highly nonlinear (Lee & El-Sharkawi, 2007). Consideration of highly nonlinear characteristics of the units requires highly robust algorithms to avoid getting stuck at local optimum. The classical calculus based techniques fail in solving these types of problems (Rani & Latha, 2016) because of these algorithms stuck with local optimum solutions (Sakhrieh et al., 2017). In this respect, stochastic search algorithms like Genetic Algorithm (GA), Particle Swarm Optimization (PSO) (Magrini & Lazzari, 2018; Halber & Chakravarty, 2018) may prove to be very efficient in solving minimization of power consumption problem without any restrictions (Sharma and Rai, 2017; Sen et al., 2017). These are nature inspired algorithms. Alan Turing was the first who used heuristic algorithms in 1948. But 1960s and 1970s were the two decades of development of Evolutionary Algorithms (EA). Today these are very popular to solve the real-world optimization problems (Keshtkar, 2017). Some of recent evolutionary algorithms like Cuckoo Search (CS) have been introduced (Nie & Yue, 2008). This algorithm is inspired by brooding behaviour of cuckoos and based on levy flights and successfully implemented for various optimization problems (Idoumghar & Melkemi, 2011). Later on many researchers have given different techniques to improve performance of the basic algorithm like as Dynamic PSO or Improved PSO or Hybrid Algorithms. In hybrid algorithm merits of two algorithms combine and demerits are removed. Such algorithm has better characteristics (Nie & Yue, 2008; Idoumghar & Melkemi, 2011; Goyal & Mehta, 2004).

Analog circuits play an important role in modern electronic systems. Any electronic circuit is consisting of components like resistor, capacitor, transistor etc. It is required to minimize the power consumption in the circuits. A circuit of single stage common emitter amplifier is implemented for problem formulation. The single stage common emitter amplifier circuit as shown in Figure 1 is called as "voltage divider biasing". This type of biasing arrangement uses two resistors as a potential divider network across the supply with their centre point supplying the required base voltage to the transistor. The transistor is transformed to small signal module and mesh analysis is applied to convert the circuit into matrix form. 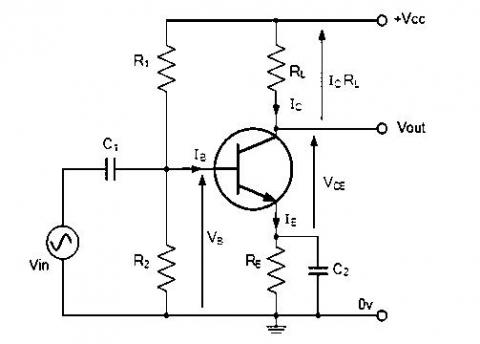 Circuit parameters are adjusted in their min-max range to achieve the objective of power consumption minimization.

Frequency response of Common emitter amplifier is the variation of gain with respect to frequency range. Gain over bandwidth i.e. difference between lower (FL) and upper (FH) cut-off frequency points remain constant and falls off by 3db at frequency below or above the cut-off points.

Genetic Algorithm (GA) is computerized search and optimization algorithm, based on mechanics of neutral genetics and natural selection. It is a population based stochastic global search method and apply the Darwin’s principle of “Survival of fittest” to produce better and better solution. Genetic Algorithms are commonly used to generate high-quality solutions. A GA uses a population of individuals (solutions) instead of a single solution to perform a parallel search in the problem space. The basic elements of natural genetics are reproduction, crossover and mutation (Saini et al., 2017; Sharma & Goyal, 2017). 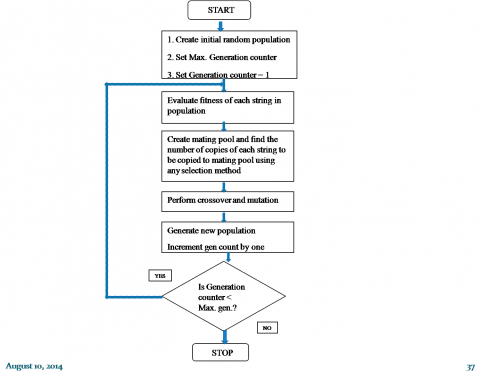 Particle Swarm Optimization (PSO) algorithm was first described in 1995 by J. Kennedy and R. C. Eberhart This algorithm is inspired by simulation of social psychological expression. As like people solve their problems by talking with each other and interacts by sharing their beliefs, attitudes, and behaviour changes. In PSO, each individual makes its decisions by his own experience together with other’s experiences. The algorithm of PSO works in a way to have all the particles being located in the optimal position.

Thus, working behaviour of swarm intelligent technique is based on three important factors:

(3) Alignment—Follow the general heading of the flock.

As like other evolutionary algorithms, PSO is also initialized with some random solutions. In PSO, each individual “i”, called particle, represents a solution to the optimization problem i.e. a vector of decision variables, Xi (Das et al., 2016).

In PSO algorithm particles follow the fittest member of the swarm and move toward historically good areas of the provided space. Each particle tries to modify its position using the following information:

In order to modify the solutions vector, each individual is associated with some velocity, v. Starting from some random value, velocity is updated in each iteration by the following equation (Hussein et al., 2014).

Gbest is the global best position in the problem space. Pbest is the best known individual position of a particle.

Vtij is velocity of jth member of ith particle at iteration number t which is bounded in its min-max limits (Sharma et al., 2017)

After iteration the position vector of swarms is updated by adding the velocity ‘v’ in the current solution vector and same processes is repeated.

It is observed that the performance of PSO is problem-dependent. This dependency usually results from the parameters settings in each algorithm. The different parameters for a stochastic search algorithm result in high performance variances. Thus finding the best value for the parameters is not easy task. To overcome the limitations of PSO, hybrid algorithms with GA are proposed. The basis behind this is that such a hybrid approach is expected to have merits of PSO with those of GA. One advantage of PSO over GA is its algorithmic simplicity. Another clear difference between PSO and GA is the ability to control convergence. Crossover and mutation rates can subtly affect the convergence of GA, but these can not be analogous to the level of control achieved through manipulating of the inertia weight. In fact, the decrease of inertia weight dramatically increases the swarm’s convergence.

The proposed algorithm which is a Hybrid of Genetic Algorithm (GA) and Particle Swarm Optimization (PSO). It has following steps:

(3) Finding Pbest and Gbest as per PSO.

(7) Evaluate again the objective function and update Pbest as well as Gbest. 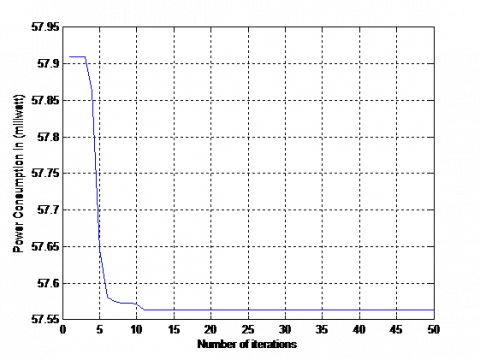 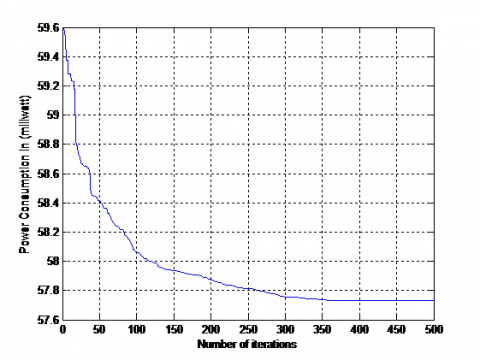 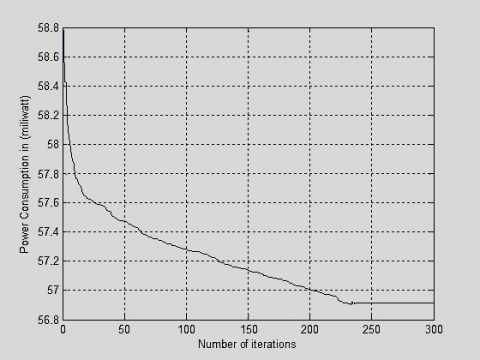 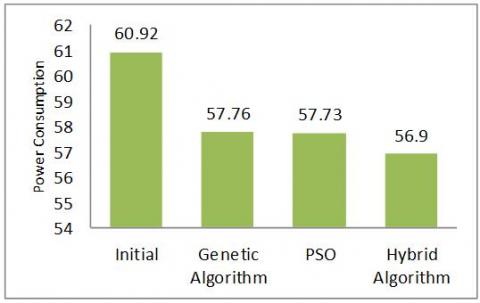 In this paper a comparative study has been given for the solution of problem of power consumption in analog electronic circuits using well known artificial intelligence based optimization algorithms i.e. Genetic Algorithm (GA), Particle Swarm Optimization (PSO) and Hybrid GA-PSO algorithm. Figure-7 shows the comparison of results obtained by all three techniques. Optimal solution for the objective function of power consumption is obtained by GA, PSO and proposed algorithm hybrid algorithm which is designed by incorporating some features of PSO in GA. In respect of basic GA and PSO techniques, hybrid algorithm performed better in percentage minimization of power consumption as well as less time taken in finding optimal solutions. Genetic algorithm (GA) took more time in finding optimal solution due to more iteration required. It is also observed after optimization the band width of frequency response curve is increased with new values of lower & upper cut-off frequencies.