The commutation of semiconductors and their interactions with parasitic elements linked to the environment is known to be the main source of interferences conducted in power electronic converters. Thus, identifying these sources of interferences in commutation cells and determining the level of these conducted emissions generated in energy conversion systems presents a major challenge for designers. In this work, a study of the electromagnetic interferences (EMI) generated by the association of serial rectifier-chopper connected to a Line Impedance Stabilization Network (LISN) is proposed, in which a determination of these interferences is presented in both common and differential modes. All simulations are carried out using the LT-spice software and the results obtained are validated by experimental measurements realized at APELEC laboratory (University of Sidi Bel-Abbes, Algeria).

The number of devices used in power electronics has been significantly increased in the recent years. Based on semiconductor commutations operation, these devices are used nowadays in several domains such as land and air transport, domestic applications destined to the general public consumers as well as in renewable energies [1, 2].

The operation of the static converter is polluting the environment due to its commutation times that are very short at very high amplitudes. These fast commutations operations reduce losses during commutations as consequence of the presence of the voltage and current simultaneously within the interrupters. The orders of magnitude of the commutation gradients can vary between 100 to 1000 A/μs for the dI/dt and from 5 to 50 kV/μs for the dV/dt. Moreover, very high commutation frequency is another factor that increases the electromagnetic pollution, as it can vary from 100 Hz to 1 MHz. This condition presents a serious problem in regards to the Electromagnetic Compatibility (EMC), in which we face:

In power electronics, a conversion chain generally involves several conversion stages as highlighted in Figure 1. These stages often consist of: a rectifier followed by a commutation stage such as speed variators, a switching power supply, and an inverter for induction heating systems, etc. The study of the electromagnetic compatibility can be performed at several levels like the power lines, rectifier, converter and its control, filtering, the load, etc. [3-6]. In the present work, we investigated the conducted interferences. 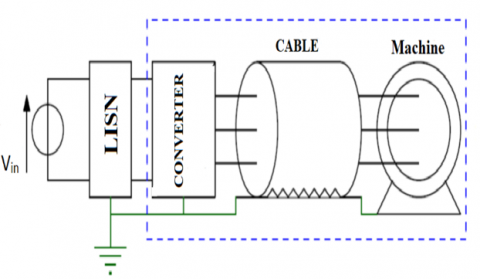 The first step of evaluating the conducted emission interferences consist of determining the sources of theses interferences. In an electromechanical chain, the identification of these sources is immediate and intuitive. The main conducted EMC interferences are generated by the commutation of the power switches of static converters. These state changes generate strong variations in voltage (dV/ dt) as well as in current (dI/dt).

The brutal variations of the voltage associated with parasitic elements between the system and the ground plane induce disturbing currents in the ground circuits. Therefore, active elements in the converter such as power semiconductors are the main interference sources of voltages and currents [7-9].

The conducted type of electromagnetic interferences manifest at highly variable frequencies and origins.

As shown in Figure 2, the origins of interferences could be identified according to their frequency ranges.

At low frequencies, from 10 Hz to 10 kHz, interferences are due to the harmonics related to the rotation frequency of the electrical machine. Then, the harmonics associated with the switching of the interrupters of the energy converter occur in the frequency range of 10 kHz to 1 MHz. At high frequency domain, there is first, a range of 500 kHz to 100 MHz, in which the harmonics depend on the commutation mechanisms, and the parasitic phenomena that appear during commutation. Finally, the last frequency band range is beyond 100 MHz in which the strikes linked to the control of the switches appear, such as driver, grid control, etc. [9, 10]. 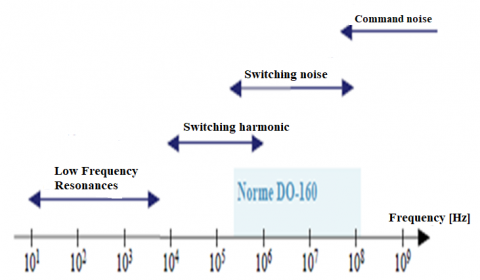 3. Conducted Interferences and Their Propagation Path

In the context of power electronics, the EMC aspects cover the following essential particularities:

The converters are, at the same time:

The external interferences from natural and industrial environments can also occur [17-20].

A simple case of conducted interferences emitted by a converter is presented in Figure 4. In this figure, VN represents the disruptive voltage of the converter. Z1 and Z2 represent the impedances of the noise propagation paths; ZC1 is the impedance between the device and the ground. Resistors RC1 and RC2 represent the load of the noise. These are normalized resistors (50 Ω) in which the parasitic voltages created in the victim are measured. 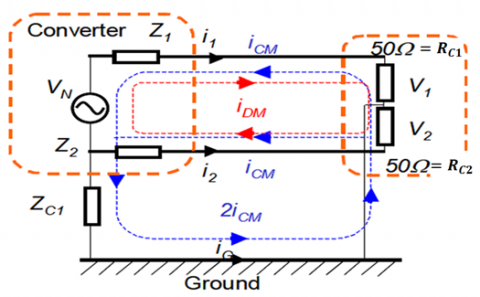 Thus, the real interference current in two power lines is:

It is noted that the standards related to electromagnetic interferences indicate the noise voltage limits on a resistor of 50 Ω, thus, the following equations are established for the both voltages V1et V2, at the terminals of the resistors RC1 et RC2 respectively:

The following mathematical expressions represent the voltage drops across the resistor RC due to current of differential mode (DM) and current of common mode (CM):

The voltages v1 and v2 could be calculated as follows:

However, because of the distortion of the line current signal (useful signal) and the negative effects of electromagnetic interferences on the useful signals, and consequently on the quality of the delivered energy, this prompted standard-setters to set emission limits or emissivity of equipment and systems connected to the energy distribution network. These limits are reflected in standards imposing the maximum interferences limits produced by power electronic devices, as well as in the establishment of criteria preventing victim devices from being too sensitive to interferences (immunity limits) [22].

5. Study of Interferences in the Rectifier-Chopper Association

Three temporal functions Fbridge(t), FDM(t) and FCM(t) represent respectively: the interferences linked to the rectifier over a half-period of the network signal, in differential and in common modes of the converter over one chopping period.

The following form demonstrates the temporal function that represents all interferences over one period, at low frequency: 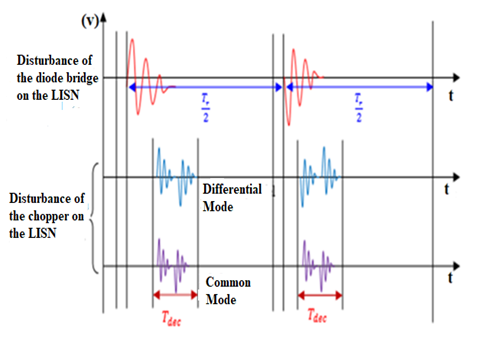 5.1 Simulation of the Rectifier-Chopper Association

The simulation circuit is presented in Figure 6, where the inductive and capacitive parasitic elements are taken into consideration. The components used are: rectifier diodes of type 1N4007, a MOSFET of type IRF740 and another diode of type BYT12P1000. The MOSFET is controlled by a slot with a duty cycle of 40% and a commutation time of 670 µs. The assembly is connected to the LISN.

This circuit has the following data:

After realizing the two converters, the diode bridge single-phase rectifier and the serial chopper, an association has been made between them in order to measure the electromagnetic interferences.

Figure 6. Diagram of the Rectifier-Chopper association with the LISN built under Ltspice Software

Figures 7 and 8 illustrate a descriptive diagram and a photograph of the experimental bench of the Rectifier-Chopper association in serial with the Line Impedance Stabilization Network (LISN), respectively.

Figures 9(a) and 9(b) represent the temporal results of the voltage at the input of the rectifier obtained by simulation and by experiments respectively.

The rectified voltage and the voltage at the output of the chopper, obtained by simulation and by experiments, are shown in Figures 10 and 11 respectively.

Based on the different graphs, the voltage at the rectifier input has a waveform similar to that of the rectifier loaded by a simple resistor. However, in the rectified voltage waveforms, due to the commutations of the MOSFET and the diodes, a periodic oscillatory phenomenon is clearly visible when performing a zoom that corresponds to the commutation time interval. This phenomenon is similar to the studied one. It is due to the sudden commutation of switches and the effect of inductances of connection as well as the passive components of the converter. 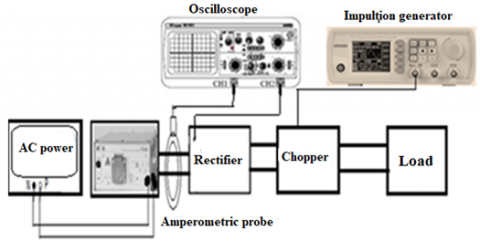 Figure 7. Descriptive diagram of the experimental bench of a rectifier-chopper association 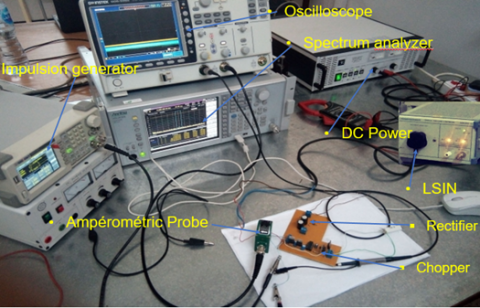 Figure 8. Photograph of the measurement bench of the electromagnetic interferences generated by the rectifier-chopper association 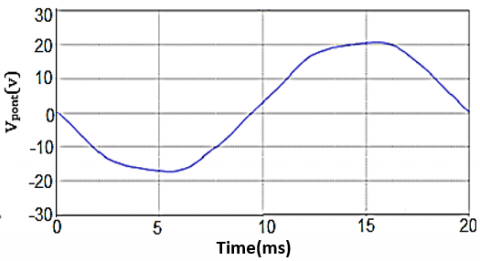 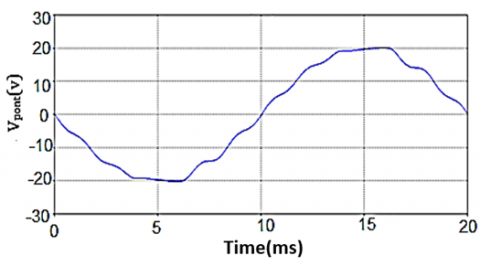 Figure 9. Temporal variation of the voltage at the input of the rectifier bridge: (a) Simulation results, (b) Experimental results 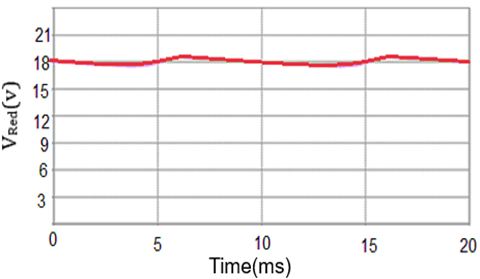 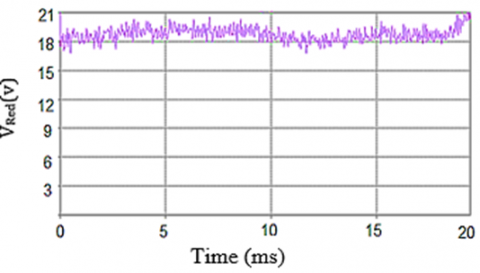 Figure 10. Temporal variation of the rectified voltage: (a) Simulation results, (b) Experimental results 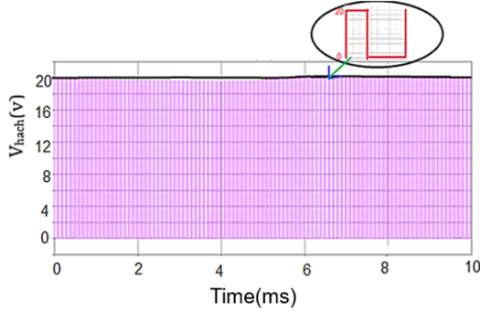 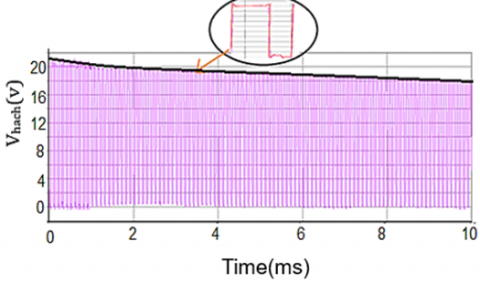 Figure 11. Temporal variation of the Output voltage of the Rectifier-Chopper association: (a) Simulation results, (b) Experimental results 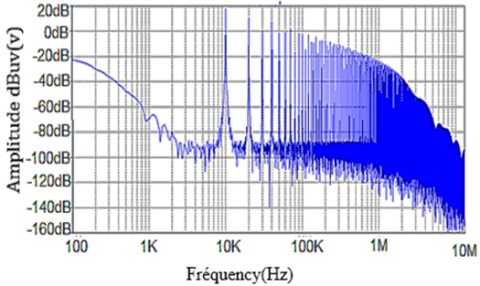 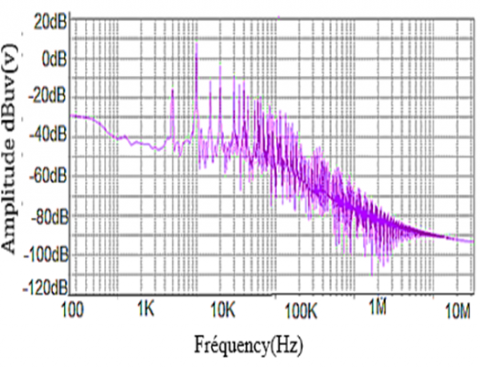 Figure 12 shows the frequency results of the voltage at the output of the chopper obtained by simulation and by experiment.

The simulation frequency results at the rectifier output and those of the experiment present clear resonance peaks of interferences at a frequency of 10 kHz; these will be minimized towards the high frequencies.

5.3 Study of interferences in common mode

Common mode interferences are measured in order to compare them with the simulation results. The frequency variation graphs (current in common mode) presented in Figure 13 are obtained by simulation and by experimental measurements.

Figure 13 presents the current spectrum in common mode corresponding to the rectifier-chopper association. We note a concordance between the simulation and the experimental measurements, thus, a significant gain in the frequency of 15 kHz, at an amplitude equal to 60 dB, followed by a minimization of the interference towards the high frequencies.

5.4 Study of interferences in differential mode

Figure 14 highlights the frequency variation of the current in differential mode, obtained by simulation and by experimental measurements.

The spectrum of the current in differential mode corresponding to the rectifier-chopper association is presented in Figure 14, where we notice an important level of the spectrum from –108 dBµA, for a resonance peak at a frequency of 150 kHz. Then, a slight minimization of the disturbance is observed towards the HF. 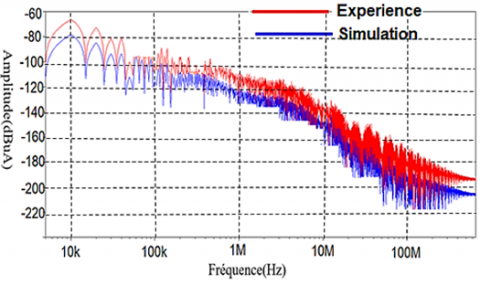 Figure 13. Current spectrum in common mode of the rectifier-chopper association 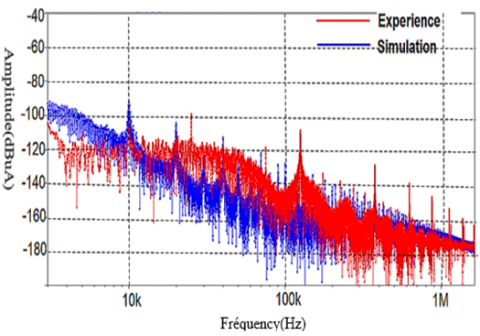 Figure 14. Current spectrum in differential mode of the rectifier-chopper association

The commutation cell in static converters generates differential and common mode interferences, which is a real problem in electrical systems. The present study determined the importance of these interferences based on the use of simulation and experimental results. A quantification of the interferences is performed in common and differential modes with the association of the single-phase rectifier and the serial chopper.

It has been proved practically that the interferences in the common mode are very high compared to the those in differential mode. This requires the use of other methods in order to reduce or eliminate these types of interferences, and this will be approached in future works.