In recent decades, many scientific applications used fractional calculus and fractional order control for industrial control systems. The research efforts in this domain have increased rapidly due to technological advances and high population density [1-4]. Therefore, many scientific applications such as mechatronics [5], biology [6], photovoltaic [6], automatic voltage regulator [4], robotics and renewable energy systems [7], have been the subject of much research in developed and developing countries. Among these, the fractional electrical machines control [8-10]. The main aim of the control machines and control dynamic process is to enhance the performances and robustness of process control. Therefore, it is necessary to concentrate on the investigation of other control strategies that include fractional calculus and fractional order controllers.

Direct torque control (DTC) is one of the most control strategies, that used in electrical machine drive for different types and investigated in many literatures [11-14]. Unfortunately, this approach has a drawback such as underside torque and speed ripples due to some internal computational defects in control action, this includes switching frequency and voltage vector selection [15-18]. However, Fractional model control has appeared as an attractive and powerful control method in electrical machine drives [8-10]. Due to that, it can be used with several approaches.

Permanent magnets synchronous machine (PMSM) drives play a vitally important role in high performance of the motion control applications [18-21]. The direct torque control or fractional order control is used in the design of PMSM to achieve the best performances [22, 23]. Unluckily, several electromechanical parameters variations are issues in the industrial control machines domain [24-26]. For this problem, several studies are reported [22, 23, 27], to improve the performance and robustness of this type of typical machine drives.

This paper presents a direct torque fractional order control design to PMSM, in this approach, a fractional-order controller PIλDγ [5, 28, 29], is synthesized using Bode’s ideal transfer function as a reference model [30-32]. The proposed technique of the PMSM speed control is compared to the conventional PID controller. Simulation results of the proposed method on a PMSM have been presented to validate the effectiveness of the fractional order direct torque control method.

This paper is organized as follows: Section 2, presents the modelling of the PMSM. Section 3, presents the DTC strategy and the Two-level three-phase voltage source inverter (VSI). Section 4, demonstrate Bode’s ideal transfer function and controller design. In section 5, some application examples of the proposed control strategy are shown. Finally, conclusions remarks are explained in Section 6.

The stator voltage and current equations of the PMSM in the d-q reference is given by [18, 26].

The electromagnetic torque developed by the PMSM can expressed as

In this section a conventional DTC scheme that was applied to PMSM will be discussed. The DTC is based on the theories of field oriented and direct self control. Field oriented control uses space vector theory to optimally control magnetic field orientation and direct self control establishes a unique frequency of inverter operation given a specific dc link voltage and specific stator flux level. The principle of DTC is to stator voltage vectors according to the differences between the reference torque and stator flux linkage and the actual values [22, 23].

The basic fundamental blocks of the DTC method for PMSM is given in Figure 1. It represents the DTC scheme applied for PMSM. That provides more precise speed control using a PID controller. In other hand, the instantaneous values of stator flux and torque producing are estimated and are controlled by hysteresis controlled directly and independently by properly selecting the inverter switching configuration, hence more responsive and accurate control to your set points [22, 23]. The used of two-level source inverter is based on the switching voltage DTC look-up. 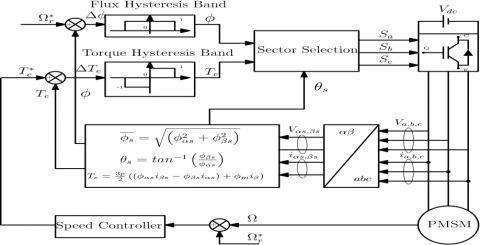 According to the principle operation of the DTC, there are six non voltage vectors and two zero voltage vectors. The section of six-voltage vectors is made to maintain the torque and stator flux within the limits of two hysteresis bands. The switching selection table for voltage is shown in Table 1 [22, 23].

The direct stator flux Фs is derived from Eq. (1). That can be expressed as

The voltage drop term Rs can be neglected at average and high speed, stator flux variation can be written as

The approximation magnitude of stator flux as

The stator flux linkage can be expressed as

The simplified electromagnetic torque equation for an isotropic PMSM (equal direct and quadratic inductance (Ld=Lq) is, namely, can be expressed as

The three- phases voltage vector Van, Vbn, Vcn of machine are independent, that will be eights different states, so the vector transformation described as [23, 27].

The three-phase voltage source inverter VSI are Va, Vband Vdc that alimented the PMSM. The combinations of the each inverter leg are commonly, for this, a logic state Si (i=a,b,c) represents each leg in order to choose an appropriate voltage vector. The simplified representation of inverter with PMSM as shown by Figure 2.

The reference model is based on ideal open loop transfer function used in feedback amplifier that gives the best performance on terms of robustness to the gain variation, the ideal transfer function of Bode is [30-32].

where, m is the fractional order integrator.

The Bode’s ideal transfer function (14) exhibits the important properties such as Gain margin -20.m(dB/dec), and a constant phase margin –mπ/2(rad). Besides that, its leading to the iso-damping property. The feedback control system has an important robustness feature even so the variation of the gain K.

The fractional system exhibits in (14) is the closed-loop transfer function of the control system Eq. (15). Presented in Figure 3 is given by:

where, the gain crossover frequency $w_{u}=K^{1 / m}$  and the fractional number 1˂m˂2 are fixed according to the desired closed loop performances. the asymptotic approximation of the equation (15), indicates that the magnitude and the phase asymptotically approach a horizontal straight line as (-m20(dB/dec)) and (-mπ/2(rad)), respectively.

Therefore, the constant phase margin $\theta_{m}$  is depending of the fraction value m.

In this paper, the model control scheme is considered as the Bode’s ideal control loop. This is chosen in Figure 4:

The transfer function control system in open loop is given as

where, C(S) and Gp(S) are the controller’s and process’s transfer function respectively.

The used fractional order controller has a similar structure with the classical PID controller that is proposed in [2, 24] given as

The synthesized fractional order controller method is based on the interpretation of the open-loop transfer function C(S) [33], which ensures that the open loop control system Gp(S) behaves like the Bode’s ideal loop as illustrated in Figure 5, thus, we can write [10, 28].

4.2 Design of the Parameters Kp, Ki,Kd

The fractional-order Kp, Ki, Kd are calculated by using the tuning method [33]:

The irrational transfer function of the fractional order integrator (14) can be approximated in the frequency band [ωmin, ωmax] by the following rational function [29, 33].

where, piand zi are the poles and zeros of the approximation, 0˂λ˂1 is a positive number.

ξ (dB) is the tolerated error between the integration and his approximation.

The interested model consists on the closed loop control of speed rotation to follow the Bode’s ideal loop. Thus, the representation of scheme with nominal parameters that are listed in Table 2 is given in Figure 5.

The process Gp(s) of control system is given as:

kФm Design the mechanical torque generated by Electromagnetic torque of (PMSM) given in (3).

The transfer function represented the dynamic system that given as

So, the process Gp(s) can written as

As a result, the Bode’s ideal transfer function can be given as

Hence from (29 and 32), the open loop transfer function GFPII(s) is given as

5.1 Performance of fractional PIλDγ controller VS the conventional

The performances of the proposed controller are compared to a classical PI controller, which are designed for the same desired performance, $\theta_{m}=45^{\circ}$  and ωu=70 rad/s.

Using the method of tuning of PID controller to instantly see the optimal parameters of the classical PI, that is a proprietary PID tuning algorithm developed by MATH- WORKS to meet the design objectives such as stability, performance, and robustness’. The obtained optimal PID parameters are given as Kp =0.02358; Ki=15.8802

And the mathematical equation of classical PI controller is given as

Consequently, the open loop transfer function GPI(S) is given as

Two simulations examples are presented, in the first test, comparing the fractional order controller, conventional controller and the Bode’s ideal transfer function for various value of K, (K=1;5;10). In the second test, a numerical simulation example is presented by applying the direct torque fractional order control. The obtained results are compared to the conventional method under the variation of the rotor magnets field and the load torque. The reference speed of the machine is fixed at 100rad/s. 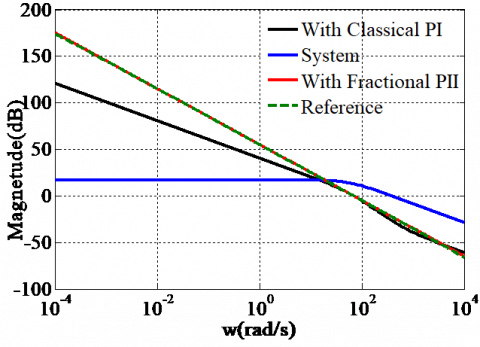 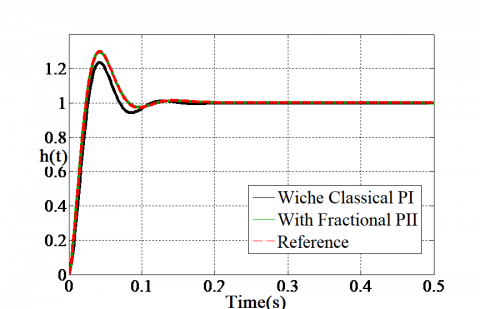 The step responses of the closed loop control systems H(s)FPII and H(s)FPI for various values of static gain K are shown in Figure 8 and Figure 9. It is clear that the first overshoot of the fractional order control system remains constant and realizes fast rise time with good robustness, that characterizes the considered fractional system. Where it is not the case of classical control system. 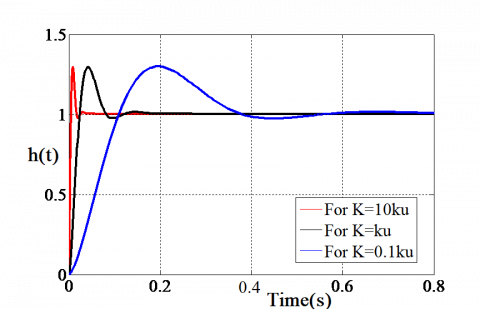 Figure 8. Step responses of the fractional control system for various values of k 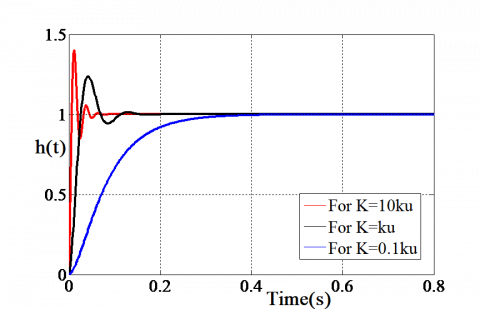 Figure 9. Step responses of the classical control system for various values of k 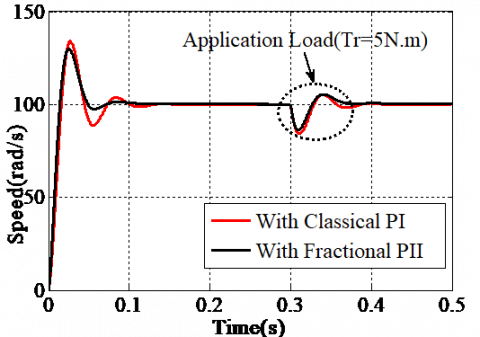 The reference of rotor speed of the machine is set to 100rad/s and a load torque is applied to 5N.m at t=0.3s, as shown in Figure 10 and Figure 11. It can observe that the performance indexes such as rise time, maximum overshoot, and steady state error are good level, with a certain improvement in the fractional order control response regarding the overshoot (almost null) and the control signal shape (less oscillations). After applying a load torque Tr=5(N.m) at t=0.3(s) the system response is maintained in a similar manner. The proposed fractional control strategy gives the less oscillatory system for flux magnet variation and application load. 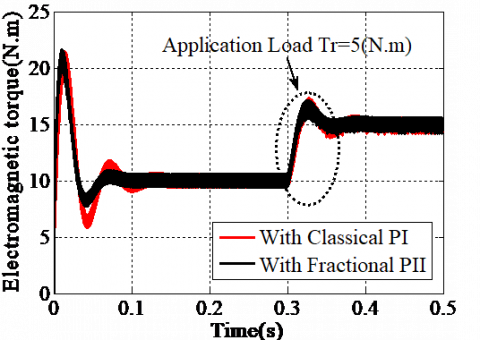 The effect of changes in the rotor magnet flux Фm=Qm, (Qm =K. Qm) and application torque load at t=0.3s are shown in Figures. (10-13). It can be seen that the evolution of rotor speed and electromechanical torque for the both control methods.

From Figure 12, the overshoot does not change, the response time has been much faster with the increasing flux magnet respectively. As the load torque applied at t=0.3s, the speed of response is improved.

From Figure 13, the overshoot is variable with a long response time than in Figure 12. Also, it is shown that for load torque at t=0.3s, the speed response obtained is faster with a low overshoot. 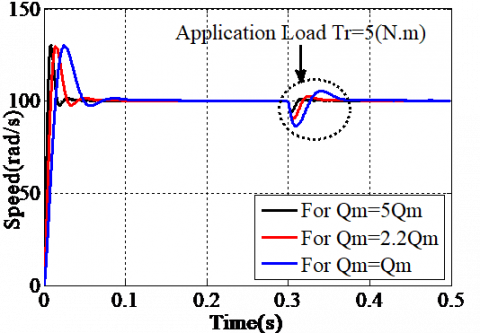 Figure 12. Speed responses for different values of Qm of the fractional order DTC 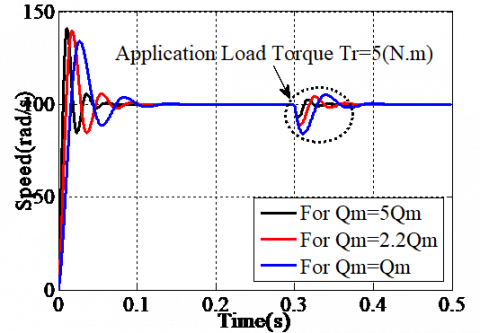 Figure 13. Speed responses for different values of Qm of the classical DTC

It concluded from this study that fractional order controller can be used to enhance the DTC to maintain the speed overshoot and to reduce the oscillation of the electromagnetic torque with a small ripple. 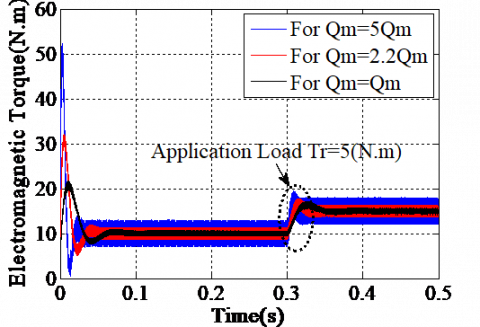 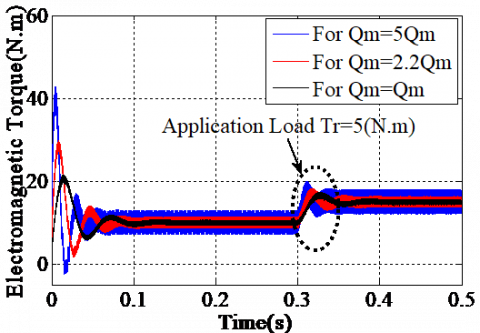 This paper presents the design of the direct torque fractional order control to PMSM which includes the use of fractional order controller and the robust Bode’s ideal transfer function. The design was simulated using software MATLAB/SIMULINK. Compared to the conventional DTC method, proposed strategy shows good performance and robustness. The speed overshoot is maintained at fixed value and torque ripple is decreased.