Because of its uniqueness and convenience in acquisition, fingerprint has become one of the most important ways for identification, and has been widely used in various social environments. With the continuous technological development, the fingerprint recognition technology has become more mature and robust. High-quality fingerprints can be well pre-processed and recognized; however, low-quality ones acquired are often hard to correctly recognize with the current technology. There are two major reasons for the poor acquisition quality of fingerprints: the finger is pressed and deformed during the acquisition process, and as a result, it is difficult to align the input fingerprint with the sample in the fingerprint database (Dass and Jain, 2007; Shi et al., 2018; Tripathy and Harish, 2018; Zhu et al., 2005; Zhang et al., 2007); the contact area between the finger and the sampler is too small, so the fingerprint minutiae acquired are not adequate, or the dirt on the finger reduces the quality of the image captured (Nguyen et al., 2013; Yang and Park, 2008; Qi et al., 2005; Wang and Niu, 2007).

The principle for multi-view fingerprint image acquisition is shown in Figure 1, which shows the fingerprint is acquired from 3 views. The finger enters the system from above, and below it there are 3 cameras set at three angles to capture the images from three views. 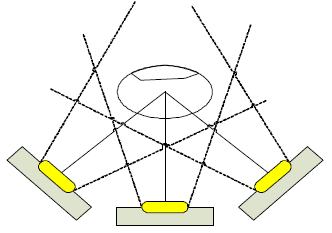 The authentication template and the query sample in the acquisition system can be expressed as follows:

til and qil represent the features of the template and the input feature values of the query sample under different views in the i-th fingerprint image match. The same is for other elements. So the following equation holds:

sill stands for the matching score of the input fingerprint and the sample in the system under the first perspective in the i-th match in the system.  sill can be expressed as follows: 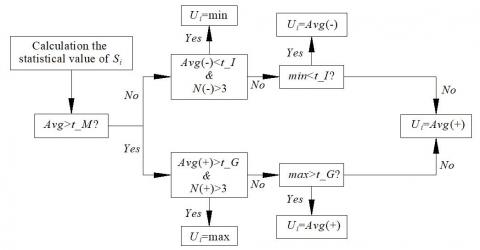 This paper proposes the improved multi-view non-contact clustering fingerprint recognition algorithm by integrating and improving the above image processing technologies. The flow chart of this algorithm is shown in Figure 2. The matching scores in Equation (3) are divided into 2 categories - the results with a larger average are classified as a category and denoted as S{+1}; the reset with a smaller average are denoted as S{-1}. Let the number of elements in S{+1} and S{-1} be N(+) and N(-), respectively. When N(+)>N(-), there is a large probability that the input fingerprint is legitimate; otherwise, the probability for illegitimate fingerprint is high. It can be seen from Figure 2 that, after the matching set is classified, it needs to be determined whether the average matching score Avg>t_M holds and the matching score should be determined based on the size relationship of the N(+) and N(-), that is to say, the core function of the improved multi-view non-contact clustering fingerprint recognition algorithm proposed in this paper is to determine the probability of fingerprint legitimacy during a single match.

(1) False acceptance rate (FAR): probability that the system determines a fingerprint is legitimate when it is not the same as the sample fingerprint;

(2) False rejection rate (FRR): probability that the system determines a fingerprint is illegitimate when it is the same as the sample fingerprint;

Area under the sensitivity curve AUC:

Table 2. Comparison of calculation indices between the proposed method and other methods 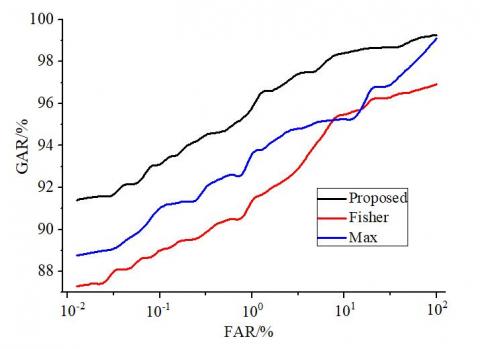 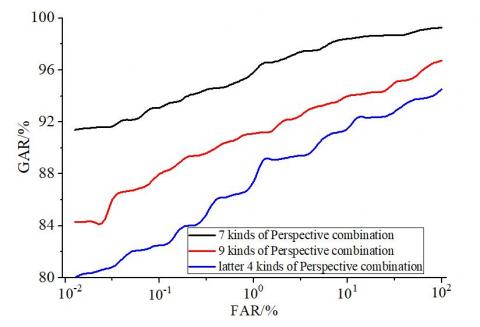 According to Equation 1, it can be seen that the local direction field of each minutia can be expressed with βl,k of the sampling points in its neighborhood, i.e.:

When there are large differences between two images, Qp and Tq need to be staggered for alignment, and at the same time, the Qp direction value should be adjusted by an angle of θ1. So the difference value can be expressed as:

In order to verify the effectiveness of the proposed fingerprint image direction field matching algorithm, this paper designs a verification test. The test data were selected from the 2014 International Fingerprint Database, which include fingerprints of 500 fingers in total, with 8 images for each finger. 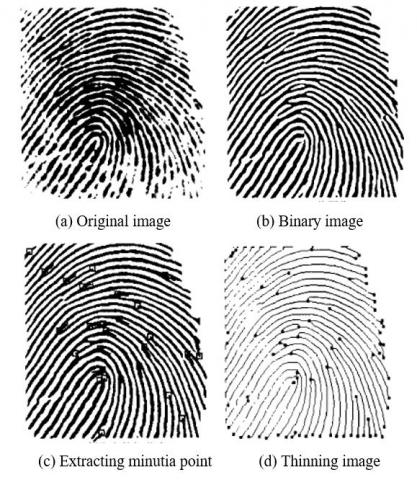 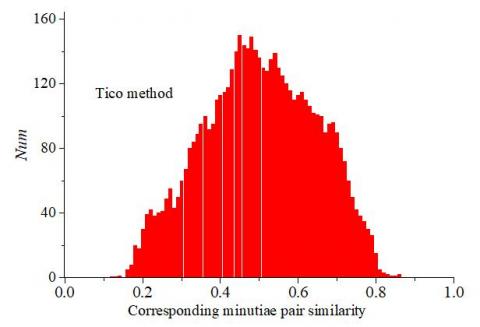 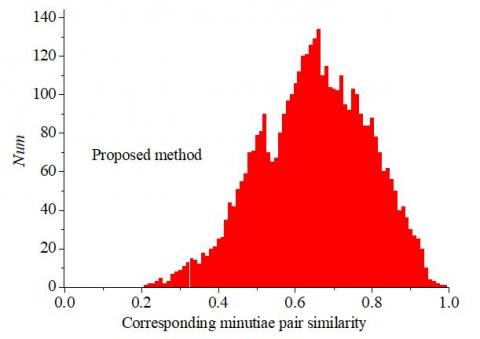 Images affected by nonlinear deformations were chosen for processing and analysis. One of the original images input is shown in Figure 5(a), denoted as Q, and the corresponding input image is recorded as T. Figure 5(b) is the pre-processed binary image. Figure 5(c) and Figure 5(d) are the refined images after the extraction of the direction field. As can be seen from the figure, due to the impacts of nonlinear deformation, there are great differences in local parts of the image.

Figure 6 lists the similarity distributions under the proposed algorithm and the traditional classical algorithm (Tico algorithm) when there is no match in the neighborhood of minutiae. It can be seen that, compared with that under the Tico algorithm, most similarities of all minutiae under the proposed algorithm are distributed within the range of 0.6-0.8, and the main part of the minutiae is more concentrated. Therefore, the method proposed in this paper can better distinguish between matched and unmatched minutiae and thus more accurately recognize and match local direction fields of the minutiae and finally realize the correct matching of fingerprint images.

This paper compares the equal error rate (EER) of the proposed method, the Tico algorithm, the traditional support vector machine (SVM) algorithm and the BP neural network method in fingerprint matching, as shown in Table 3. It can be seen that the method proposed in this paper is better than the other three methods and better improves the fingerprint recognition matching function.