Today highlight based Image looking is a fascinating and most rising field in the region of Image Search, in which comparable pictures for the given question picture sought from the picture database. Current frameworks utilize shading, surface and shape data for picture recovery. In this paper we propose a strategy in which surface highlights of the pictures are utilized to enhance the recovery results as far as its precision. The surface extraction and examination are performed utilizing the idea of Pyramid Structure Wavelet Transform Model (PSWTM) and the Euclidean separation individually. Surface based picture recovery registers picture includes all the more precisely which are utilized to recover comparative pictures from the database. An element based picture looking framework enables the client to display a question picture with the end goal to recover comparative pictures put away in the database as indicated by their comparability. Question based Image looking, Data Mining, Medical Image seeking, Crime Prevention, Weather guaging, and Remote Image Sensing depend on the powerful picture looking methods. This paper exhibits the Feature-based Image Searching System (FBISS). The surface highlights are separated through wavelet change and these highlights is hearty to scaling and interpretation of articles in a picture. The proposed framework has exhibited a promising and quicker recovery technique on a picture database containing shading pictures. The execution assessment has been worked out by contrasting and the current frameworks in the writing. It is discovered that the normal exactness of proposed strategy FBISS is 84.4% when contrasted with the current technique i.e. 75.4% and 78.4% respectively (Rahman et al., 2011; Wang et al., 2013).

As processors turn out to be progressively amazing, and recollections turn out to be progressively less expensive, the sending of huge picture databases for an assortment of uses have now turned out to be feasible. Databases of works of art, satellite and therapeutic symbolism have been pulling in an ever increasing number of clients in different expert fields for exa mple, geology, medication, engineering, promoting, structure, design, and distributing. Viably and productively getting to wanted pictures from substantial and changed picture databases is presently a need.

Research on highlight based picture look has increased enormous force amid the most recent decade. A considerable measure of research work has been done on picture recovery by numerous analysts, growing in both profundity and expansiveness. The term Content Based Image Retrieval (CBIR) appears to have started with crafted by Kato for the programmed recovery of the pictures from a database, in light of the shading and shape present. From that point forward, the term has generally been utilized to portray the way toward recovering wanted pictures from a vast gathering of database, based on grammatical picture highlights (shading, surface and shape). The strategies, apparatuses and calculations that are utilized, begin from the fields, for example, measurements, design acknowledgment, flag preparing, information mining and PC vision. With the quick advancement of innovation of mixed media, the customary data recovery procedures dependent on watchwords are not adequate, content - based picture recovery (CBIR) has been a functioning examination subject. Picture recovery discovers its application in various areas, for example, mixed media, satellite picture databases, medicinal imaging and so on.

Customary e xhaustive manual inquiries should never again be possible over the informational index of thousands of pictures. Picture recovery procedures can be comprehensively delegated I) Te xt based, ii) Content based. Prior picture recovery methods depended on content. It has numerous disservices, for example, I) manual labeling of the considerable number of pictures with watchwords, ii) innate trouble of depicting certain angles, iii) exceptionally abstract nature (Datta et al., 2008).

This makes the manual methodology lacking for the expanding database. With the end goal to make picture recovery more compelling, highlight based Image Retrieval (FBIR) has been presented (Aliaa et al., 2010). FBIR goes for programmed extraction of highlights dependent on the scientific attributes and substance of the picture (Sharmin, 2002; Wouwer et al., 1999).

Normal FBIR includes two stages as appeared in figure 2. In the main stage, some component describing each picture in the database is registered and put away as highlight vectors. In the second stage, a similar arrangement of highlight vector is ascertained for the client given inquiry picture and it is contrasted and all the put away component vectors utilizing separation measure, for example, Euclidian separation.

In FBIR, surface highlights of the inquiry picture (e.g. appeared in figure1) and each picture in the database are separated and thought about for similitude coordinating. An ISS speak to each picture into an element vector and matches with the pictures in the database to discover the most comparable pictures. In this paper assessment of ISS dependent on Textural highlights is completed, the surface highlights are extricated utilizing wavelet change. The database utilized here contains 1000 shading pictures.

A learning-based and sifting approach is proposed by Rahman et.al. for biomedical picture recovery. It is produced by utilizing SVM characterization for learning and significance input is utilized for powerful pertinent recovery (Rahman et al., 2011).

Wang et.al. proposed a framework dependent on highlight reweighting in which bolster vector machine based pertinence criticism is utilized for characterization of pictures (Wang et al., 2013).

For picture seeking shading, surface and shape highlights can't adequately speak to picture semantics, semantic-based picture recovery is as yet an open issue. Highlight and substance based picture looking is the most vital and powerful picture recovery technique and generally examined for scholarly and industry reason (Raghupathi et al., 2010; Gevers, 1998; Lin et al., 2009). 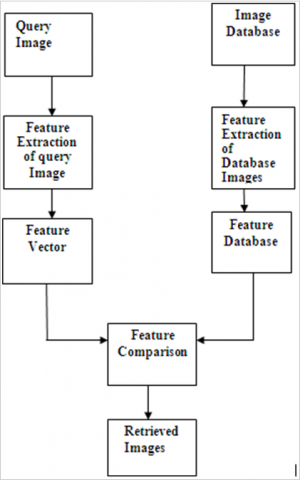 As of late Murala, Subrahmanyam, and QM Jonathan Wu proposed the picture recovery framework for MRI and CT pictures by utilizing nearby work crest valley edge designs Initially the ordering is performed and after that significant pictures are recovered (Murala et al., 2014).

The Proposed Feature-Based Image Searching System (FBISS) is assessed dependent on pyramid-organized 3-level wavelet change. Utilizing the pyramid structure wavelet change, the surface picture is disintegrated into four sub pictures, as low-low, low-high, high-low and high-high sub-groups as appeared in figure 3 (Sharmin, 2002). This procedure is proceeded until the point when third dimension disintegration happened. Vitality of all deteriorated pictures is figured utilizing vitality level calculation. Euclidean separation is utilized to discover the simila rity between the inquiry picture and the database picture. The littler the separation is, the more comparative the two pictures are. The execution of the recovery framework is then assessed utilizing exactness and review measures (Aliaa et al., 2010). 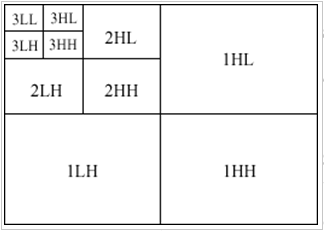 Surface is that intrinsic property of all surfaces that portrays visual examples, each having properties of homogeneity. It contains critical data about the auxiliary course of action of the surface, for example, mists, leaves, blocks, texture, and so on as appeared in figure 4. It additionally portrays the relationship of the surface to the encompassing condition (Aliaa et al., 2010). So, it is an element that depicts the particular physical structure of a surface. 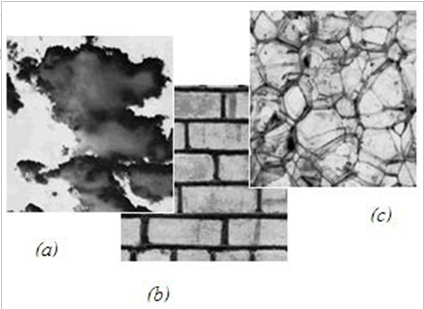 The surface is a low-level component for picture pursuit and recovery applications(Gonzalez & Richard, 2001). Much work has been done based on surface investigation, order, and division throughout the previous multi decade. There is no extraordinary definition for te xture; in any case, a typifying logical definition as given in (6) can be expressed as, "Surface is a trait speaking to the spatial game plan of the dim dimensions of the pixe ls in a district or picture". The normal known te xture descriptors are Wavelet Transform (Smith & Chang, 1994), Gabor-channel (Manjunath et al., 2000), co-event networks (Haralick, 1979) and Tamura highlights (Tamura et al., 1978).

We have utilized Wavelet Transform, which disintegrates a picture into symmetrical parts, due to its better restriction and computationally reasonable properties (Wouwer et al., 1999; Livens et al., 1997).

The Euclidean separation D between two vectors X and Y is

Ventures for 1D Haar change of a variety of N components:

(2) Find the contrast between each match of components and separation it by 2. (N/2 coefficients)

(3) Fill the principal half of the exhibit with midpoints.

(4) Fill the second 50% of the exhibit with coefficients.

Review gives the estimation in which how quick the recovery framework functions. It likewise measures how well the element based picture look framework discovers all the pertinent pictures in a scan for a question picture. They are characterized as figured.

Register 1D Haar wavelet deterioration of each column of the first pixel esteems.

Table 1. Precision of the retrieval by different methods

For each question picture, we analyzed the accuracy of the item, in light of the pertinence of the picture semantics. The semantic pertinence is dictated by manual and every one of the recovered pictures by FBISS. The accuracy esteems, figured by utilizing the condition 5 and the normal exactness esteems are appeared in Table 1.

The Proposed framework has been utilized to think about the picture recovery utilizing wavelet change and the execution of the proposed picture looking method has been assessed by contrasting the outcomes and the aftereffects of various creators (Rahman et al., 2011; Wang et al., 2013) as appeared in the Table 1 and in figure 5. The database comprises of 1000 jpg arrange pictures, the adequacy of the proposed FBISS is assessed by choosing 10 question jpg pictures under every classification of various semantics. The 10 inquiry recoveries by the proposed strategy for four example question pictures is appeared in figure 6, 7 8 and 9 with a normal recovery time.

These outcomes demonstrate that the execution of the proposed strategy is superior to anything alternate techniques like given in (Rahman et al., 2011; Wang et al., 2013). 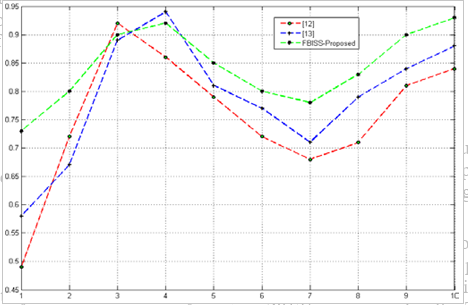 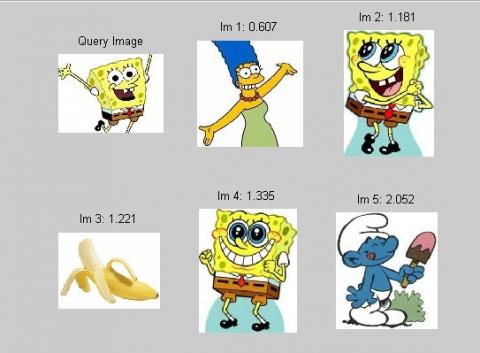 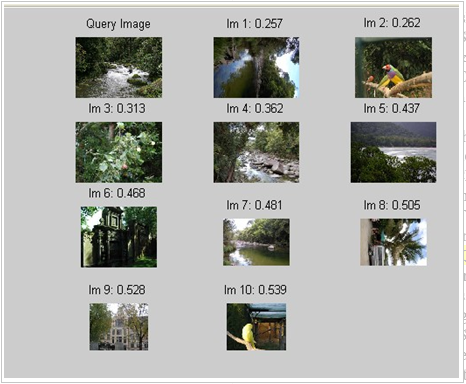 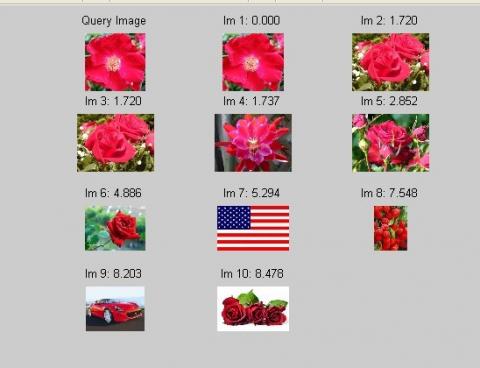 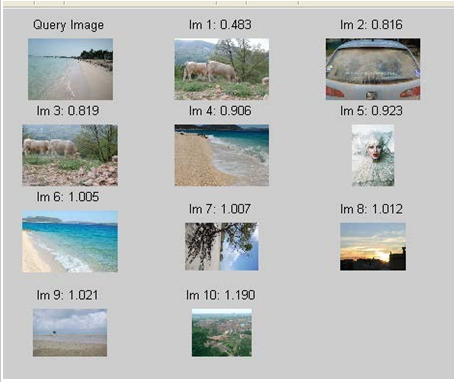 The sensational ascent in the sizes of pictures databases has mixed the improvement of viable and proficient recovery frameworks. The advancement of these frameworks began with recovering pictures utilizing printed implications however later presented picture recovery dependent on substance. This came to be known as highlight based Image Retrieval or picture web index. These frameworks recover pictures dependent on visual highlights, for example, shading, surface and shape, instead of relying upon picture depictions or printed ordering. In this work, we have utilized the surface element of a picture. The application plays out a basic surface based scan in a picture database for an information question picture, utilizing Haar wavelet change deterioration and vitality level computation. It at that point looks at the surface highlights acquired utilizing the Euclidean Distance Equation. In paper (Rahman et al., 2011; Wang et al., 2013) the normal exactness is 0.754 and 0.784. By utilizing this proposed method the recovery rate for pictures is enhanced it turns out 0.844.

Aliaa A., Yousif A., Darwish A., Mohammad R. A. (2010). Content based medical image retrieval based on pyramid structure wavelet. IJCSNS International Journal of Computer Science and Net work Security, Vol. 3.