The motivation behind steganography when all is said in done is to make acommunication private with the end goal to conceal the message content from a gatecrasher. Steganography by and large contrasts from cryptography from various perspectives and its applications are far reaching. In this paper, steganography is utilized to conceal the mystery picture utilizing an inserting method. This system can be utilized for pictures of any size and types, e.g., jpeg, tiff, bmp and so on. The utilization of steganography in this paper given greatest security with the end goal that any outsider or gatecrasher can't think about what mystery picture content was sent. An alternate encryption and decoding plans are utilized here. The calculation utilized for encoding and decoding the picture utilizes a Feistel structure and it takes contributions to twofold organization i.e., 1 or 0. The results of different examples furnish security with high proficiency and the concealed substance isn't effectively traceable.

"Steganography" for the most part alludes to the covering of mystery messages inside a normal message. In our work, the mystery picture is scrambled and decoded utilizing Protected Strength calculation (PSA). The PSA pursues Feistel structure. In this calculation, the procedure of encryption and unscrambling are similar. The upside of utilizing Protected Strength calculation is that it limits the code volume to an enormous e xtent. In contrast to Feistel, th is calculation comprises of five rounds which is a large portion of the quantity of rounds in DES (Stallings, 2011).

This paper pursues the procedures of encryption, inserting what's more, unscrambling. Two pictures are taken as contribution among which one is a cover picture which is utilized for installing and the other is a mystery picture which will be covered up inside the cover picture. As an initial step, the mystery picture is encoded and covered up. The subsequent stage is to insert the cover picture together with the scrambled mystery picture. The resultant picture in this progression is classified "Stego Image" (SI). As the last advance, the stego picture is decayed into two sections after which the scrambled picture is unscrambled.

Yuan (2014) proposed a mystery sharing plan where the whole mystery picture is fragmented into various squares. Each square is encoded and joined together with the goal that any outsider won't have the capacity to figure the mystery content. This conspire bolsters both mystery sharing and steganography fields. It likewise expands its help for RGB pictures and guarantee to offer the security for message sharing.

Lin & Tsai, (2004) set forward a plan with quicker unscrambling that should be possible by reflecting the individual squares of mystery picture that are heaped up to reveal the mystery picture. This work is good just for twofold pictures where the uproarious picture created is dicey to the intruders. The plan utilized here has three dimensions of security assurance. The recuperation of the scrambled picture is just lossless.

Jafar et al., (2016) proposed an implanting strategy that depends on paired qualities. On the off chance that the esteem is 0, the esteem is left unaltered. What's more, if the esteem is 1, the current esteem is balanced in respect to the neighboring quality. This produces PSNR with a base estimation of 48.1 db. This work gave an enhancement in the execution of inserting, nature of picture and e xecution time.

Nguyen et al., (2016) presented a system called reversible information concealing which modify the first picture losslessly amid extraction. In this work, they make utilization of three classifications. The aftereffects of this work demonstrated to have reversibility. This has an exceptional element of enhancing the visual nature of the picture decoded.

Al-Dmour & Al-Ani, (2016) proposed an uncomplicated picture steganography which is framed by the recognizable proof of edge areas in the cover picture. This incorporates a XOR encoding capacity. This procedure has favorable circumstances of limited computational multifaceted nature, limited mutilation. This can likewise be utilized for inserting in wavelet and spatial spaces.

Reddy & Kumar, (2016) set forward an implanting procedure that has two calculations, which are Least Significant technique and HARR wavelet strategy. In this work Discrete Wavelet Transform (DWT) has been utilized. It likewise joins a cryptographic strategy which is utilized to scramble and unscramble the mystery picture. It gives double layer security.

Joshi & Yadav, (2015), Charan et al., (2015) utilized the idea of Vernam figure and LSB-S strategy for implanting. The converging of these two procedures gives you security and different prerequisites. The proposed strategy outperforms the restrictions of existing strategies. The outcomes have great PSNR and MSE esteems.

Al-Shatanawi & Emam, (2015) proposed another framework for the system of steganography. This procedure pursues two calculations specifically, Different Size Image Segmentation (DSIS) and Modified Least Significant Bits (MLSB). This proposed strategy utilizes irregular pixels of a picture and is then encoded. This accomplishes more prominent dimension of security. The result of this method brought about effective e xecution and are imperceptible.

Nagaraj et al., (2013) set forward a procedure utilizing Pixel Value Modification where the pixe ls are partitioned into the accompanying planes R, G and B. In this technique the cover picture is a computerized picture. The pixe l esteems in this work won't go past the limit 0-255, and furthermore here one pixe l has the installing estimation of one mystery digit. Subsequently the mystery picture is unsheathed effectively.

Al-Rahal et al., (2016), Karthikeyan et al., (2014) proposed another approach where the sound and picture documents can be utilized to shroud the mystery content utilizing Least Significant Bit (LSB) strategy. In this work, an uncommon procedure to be specific "Exceptional Randomization" is done after encryption dependent on a few stages like Zigzag, fo llo wing a diffe lease coding system rather than ASCII, begin moving and assorted layers. This technique can be utilized to conceal any sorts of messages and twisting is undiscernible to a specific e xtent.encryption and decoding are indistinguishable in their handling. That is, unscrambling is the turn around of encryption.

The installing stage pursues the encryption stage. In this stage, the cover picture (C) alongside the encoded mystery picture (ES) is taken as information. The inserting continues by taking each list esteem and these qualities are spoken to in paired arrangement. Presently the LSB of ES(i,j) is picked, and is utilized to supplant the MSB of C(i,j). The resultant qualities present in the installed picture (E) will be not exactly or equivalent to |3|. The yield will comprise of both the pictures so that, the encoded mystery picture will be holed up behind the cover picture and is alluded to as the "Stego Image".

The recovery which is the subsequent stage, is finished by utilizing the ST. From the ST, the LSB of each pixe l is taken which is trailed by the reshape work which yields the encoded mystery picture. Presently the encoded mystery picture is unscrambled to recover the mystery picture. To do this, utilization the Protected Strength decoding calculation, which works in the invert request of the Protected Strength encryption calculation by making utilization of the fitting key qualities to be specific K1, K2,K3,K4, and K5.

The outcomes are portrayed underneath with their particular MSE and PSNR esteems.

Figure 1. Flow of the method

Figure 1 speaks to the general thought of this paper. The procedure exp lained underneath in this paper is executed in three stages. They are, 1) Encryption, 2) Embedding, and 3) Retrieval and Decryption. These stages are represented beneath in detail.

The encryption stage is finished utilizing Protected Strength calculation (Ebrahim and Chong, 2013) for the mystery picture. The calculation pursues a Feistel structure which has five adjusts altogether. Beginning with the mystery picture, it is part into equivalent measured squares. Each square is separately scaled and encoded. A key of 64-bit length is picked and ventured into five subkeys to be specific K1,K2,K3,K4, and K5. For cycle 1, the key K1 is picked, for cycle 2, the key K2 is picked, et cetera. In all the five rounds substitution and stage methods are finished. Swapping of squares is done just in the first and the third round. Toward the finish of these five adjusts, the individual squares are consolidated. 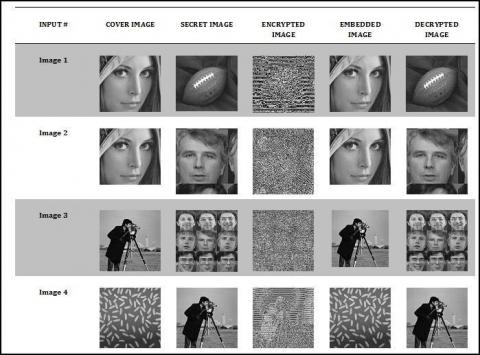 In this paper, the Protected Strength calculation is utilized for both scrambling and decoding the picture. The outcomes demonstrated that utilizing this calculation will make it troublesome for a gatecrasher to locate the mystery content. The LSB method utilized for implanting the pictures is the critical and the best piece of this work. This is on the grounds that the PSNR and the MSE esteems demonstrated that the twisting is decreased to a specific degree conceivable. Regardless of whether an interloper breaks the cover picture, he needs to realize the key qualities to separate the mystery content. To do this an interloper needs to put his most extreme exertion which is thusly because of the torrential slide impact. Subsequently this procedure guarantees to offer double layer security, superior, limiting the contortion. Further this work should be possible for any kinds of pictures like t iff, jpeg, bmp and furthermore blend of any sorts.

Al-Rahal M. S., Sen A. A., Basuhil A. A. (2016). High level security based steganography in image and audio files. Theoretical and Applied Information Technology, Vol. 87, No. 1.