Laplacian kernel convolution can be expressed as:

To sum up, ∇2[W(a, b)] is the Laplacian kernel convolution of W(a, b). On a 2D image, ∇2[W(a, b)] exists as a function with circular symmetry, whose scale can be controlled by ε.  This method is almost immune to noise. The spot detection based on Hessian matrix adopts a Hessian matrix (4) and its determinant (5):

where, det Hessian is the response degree of the image at pixel (a, b) to the matching template. On this basis, it is possible to locate the spot at the scale of ε.

In an image, the intersection of the contours of the object is defined as an angular point, which is another local feature. This paper detects angular points based on Harris algorithm. The gray variation of the image is described by the first-order differential matrix of Harris algorithm. The neighborhood of a pixel is taken as a window to move in all directions. If the first-order differential matrix changes significantly in the neighborhood window of a pixel, then the pixel is as an angular point

Owing to the features of infrared images, the image fusion faces limitations in imaging environment, band selection, and hardware requirements. To fuse short-wave and long-wave infrared images, this paper presents a registration algorithm based on the similarity of pixel grayscale distribution, which is suitable for imaging small targets over a long distance. Figure 1 shows the imaging scene. 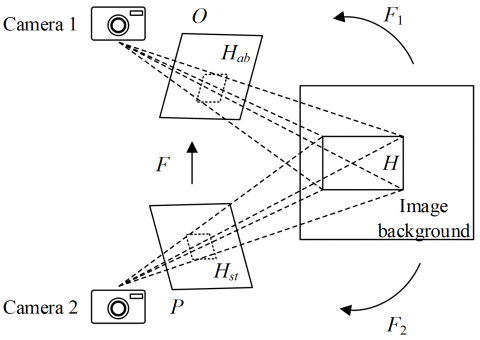 The projection transformation relationship between O and P can be derived as:

The transformation matrix F can be redefined as:

The above analysis shows that the projection coordinates of the reference point (s, t) can be calculated based on the known values of (s, t) and transformation matrix F.

If at least four pairs of matched (s, t) and (a, b) are known, all the unknown quantities in fT can be solved. Based on formula (13), a homogeneous linear equation system can be established as:

Let D be the coefficient matrix of a homogeneous linear equation system. A right singular matrix can be obtained through singular value decomposition (SVD) on D. If no three-point collinearity exists among known projection reference points and projection points, the solution to formula (14) is the last column vector of the right singular matrix.

Let MVO and MVP be the edge maps of images O and P, respectively. The traditional registration algorithm combines the extracted O and P feature points to generate multiple pairs of matching points. Unlike the traditional registration algorithm, this paper transforms the registration problem into an optimization problem that searches for the approximate optimal solution on the image plane, with genetic algorithm (GA) as the search method. Figure 3 show the flow of the algorithm. 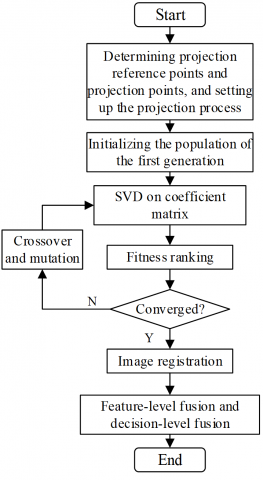 As shown in Figure 3, the first step of the GA is to set up the projection process. The projection reference points and projection points in MVO and MVP are binary coded, and taken as chromosomes of the algorithm.

Let (j, l) be the set of coordinates of all points in region Gi; MVO and MVPk be the mean gray values of the two images in region Gi; CO be the correlation coefficient about the similarity between the two images. Then, the fitness of chromosome i can be calculated by the correlation coefficient CO(Gi) between the images with an overlap Gi= MVO ∩MVPi':

The correlation coefficient CO falls in the interval of [-1, 1]. If the two images are identical, CO=1.

Image fusion is the last step of the algorithm. Based on the coordinates of the optimal projection point, the optimal transformation matrix can be computed. By projecting P to O, it is possible to obtain P0, i.e., realize image registration. Let G=O∩P0 be the overlap between O and P0. The fusion of equal weight images can be simply expressed as:

To control image fusion in the feasible range, it is necessary to perform zero-padding in the non-overlapping area (a, b)∉G between the two images with a sufficiently large gray value. In our algorithm, the registration process underpins the fusion process. The accuracy of the registration algorithm ensures the freedom of the fusion process. Considering the features of infrared images in different bands, it is important to design an additional feature- and decision- level fusion algorithm, such that the fused image contains the maximum possible amount of effective information. 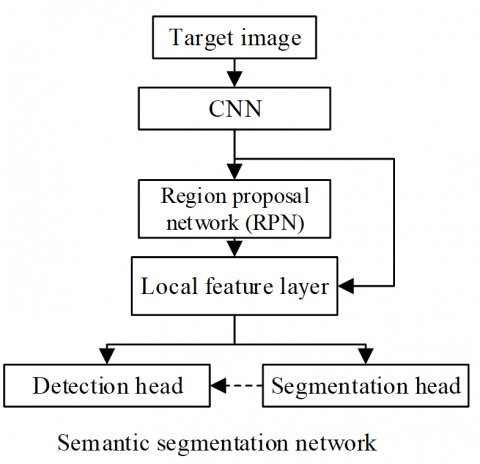 Figure 4. Structure of our CNN model

To enhance the segmentation and recognition capabilities of the model, this paper optimizes the parameter updates of Mask R-CNN based on optimizers. The stochastic gradient descent (SGD) optimizer, and root mean square propagation (RMSProp) optimizers were separately adopted to randomly optimize model parameters.

SDG optimizer trains the network based on randomly selected image samples. The learning unfolds quickly, but tends to fall into local optimum trap. Let ηle be network learning rate; uτ be gradient descent at time τ; Error be the total loss function; Q'τ and Q'τ+1 be the parameters to be optimized at time τ and τ+l, respectively. Then, we have:

et hτ be the gradient of the loss function at time τ about the current parameter. Then, the first-order momentum cτ related to the gradient can be described as:

The second-order momentum Bτ related to the square of the gradient is always equal to 1:

uτ can be expressed as:

hτ can be calculated by:

RMSProp optimizer adds a second-order momentum Eτ to SGD optimizer. Let Vτ be the gradient descent at time τ; Q'’τ and Q’'τ+1 be the parameters to be optimized at time τ and τ+l, respectively. Then, we have:

The second-order momentum Eτ, which represents the mean over the past period, can be calculated based on the exponential moving average:

Vτ can be expressed as:

The network parameters can be adaptively updated by substituting the obtained first-order and second-order momentum into the corresponding parameter update formula above.

Our optimizer inherits the features of SGD and RMSProp optimizers, and combines first- and second-order momentums to correct model deviation. Let Q"'τ and Q"'τ+1 be the parameters to be optimized at time τ and τ+l, respectively. Then, we have:

The first-order momentum cτ can be expressed as:

The deviation corrected by cτ can be expressed as:

he second-order momentum Eτ can be expressed as:

The deviation corrected by Eτ can be expressed as:

The gradient descent at time τ can be calculated by:

The network parameters can be adaptively updated by substituting the obtained first-order and second-order momentum into the above parameter update formulas.

The thermal fault diagnosis algorithm for electrical equipment in substations can be implemented in the following steps:

Establish the relationship between the pixel value HF in the colorimetric bar collected by the infrared thermal imager and the device surface temperature ψ reflected by the image:

Map the gray values obtained in Step 4 according to the results calculated in Step 1, and sort them in descending order: ψ0, ψ1, and ψ2.

Judge the fault state of the electrical device against the judgement criteria of temperature difference. 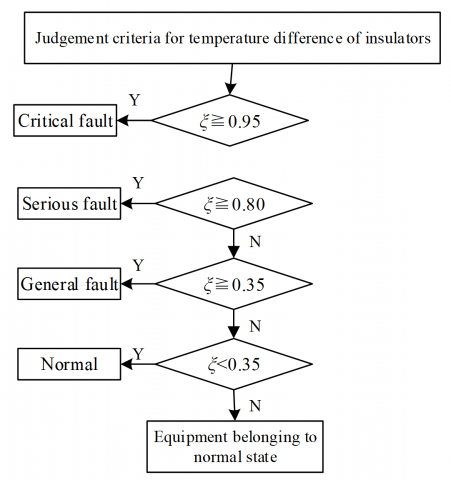 This paper collects the mean spatial frequency and mean gradient variance of 60 sets of fused images on thermal faults of electrical equipment in substations, and evaluates the fusion effect of infrared images against objective criteria. The results are shown in Table 2. 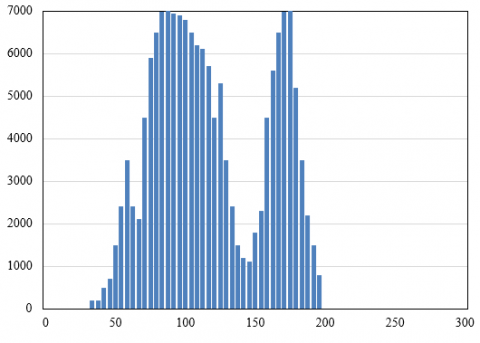 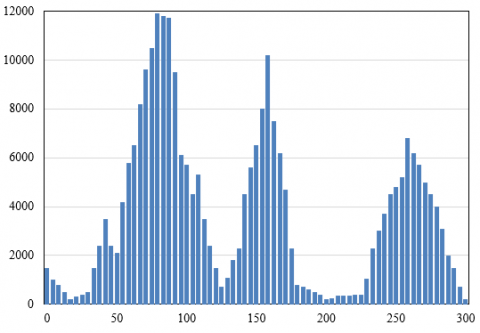 Figure 6. Gray level histogram effects before and after image fusion

Before image registration and fusion, the gray values were concentrated in a small range, a sign of the low contrast and brightness of pre-fusion image. After image fusion, the nonzero values were distributed widely on the histogram, indicating that the fused image has a high contrast and brightness. Therefore, the fused image can better highlight the target, laying a good basis for the thermal fault diagnosis of electrical equipment in substations. 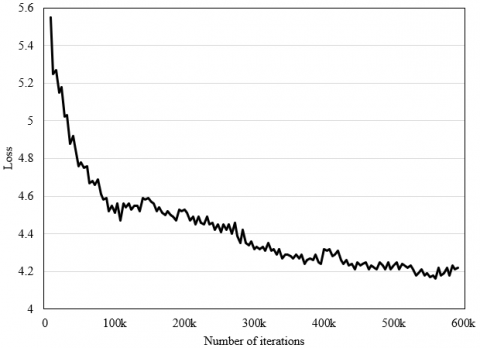 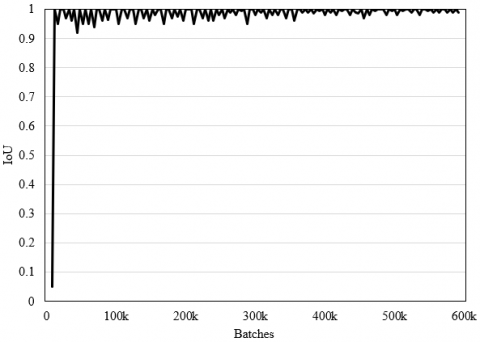 The loss function must ensure that the neural network can pinpoint the abnormal temperature areas, and segment these areas with a high accuracy. Our loss function includes three losses: the loss of classifying the target electrical device, the loss of segmenting the abnormal temperature areas, and the loss of position regression. Figure 7 shows that the total loss of the neural network tended to be stable with the growing number of iterations. The network training started to converge after the 200,000th iteration.

This paper adopts intersection over union (IoU) to measure the quality of fault detection. The closer the label box is to prediction box, the better the detection results. As shown in Figure 8, the rectangular box largely overlapped the fault target, with the growing number of batches.

The proposed thermal fault diagnosis algorithm was adopted to compute the temperature difference of each electrical device according to the corresponding infrared image. Table 4 records the results on suspension insulator, 380kV high-voltage insulating casing, and supporting insulator of 3kV capacitor bank. 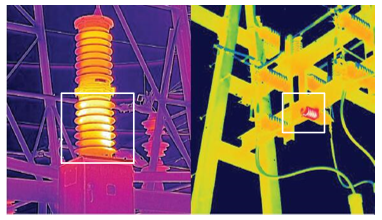 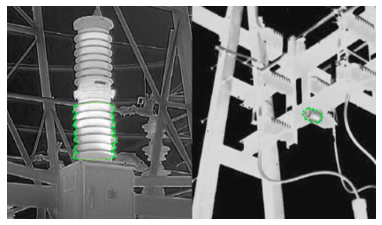 As shown in Table 4, the temperature differences of suspension insulator, 380kV high-voltage insulating casing, and supporting insulator of 3kV capacitor bank were 79%, 74.3%, and 42%, respectively. Hence, the thermal faults of the three electrical devices are all general faults, which can be checked and eliminated during shutdown inspection. The experimental results show that the diagnosis results of our thermal fault diagnosis algorithm agree well with the actual faults on the electrical equipment in the substation, indicating that our detection method is feasible and effective.