The classroom behaviors of students are the key objects in teaching analysis. It is very important to quantify such behaviors in an intuitive and dynamic manner. This paper summarizes the typical classroom behaviors of students, and specifies the steps to preprocess the collected sample images on these behaviors. Then, it is decided to discriminate students’ classroom behaviors by head poses and facial expressions. Next, a positioning method for facial feature points was developed based on deep convolutional neural network (D-CNN) and cascading, and the head poses and facial expressions were analyzed and recognized. Our method was compared with other facial expression recognition algorithms. The results show that our method is more robust and accurate than the contrastive algorithms.

As a hotspot and difficulty in image processing, human behavior recognition is widely used in many fields, namely, medical care, finance, and property management. However, it is immensely difficult to recognize the classroom behaviors of students [13-16]. Mollahosseini et al. [17] observed the behaviors of teachers and students in teaching videos, recorded and analyzed the student-teacher (S-T) interactions, and developed an S-T classroom behavior analysis method. Kim et al. [18] proposed a method that processes human motions in real time: Based on the information of human motions, the regions of interest (ROIs) were determined in specified parts, and the oriented gradient of each ROI was calculated; After that, human motions were classified by a two-dimensional (2D) convolutional neural network (CNN) algorithm. To recognize different human poses, Lopes et al. [19] created an unsupervised recognition method for static human behavior images, which calculates the image differences through global matching of human contours, and then optimizes the differences through minimization and clustering. Zavarez et al. [20] designed a Kinect pose estimation system capable of decomposing complex color images into single-color, single-frame images for analysis; the system can quickly detect the positions of major human joints in any single-frame image, and thus recognize and classify human behaviors.

Drawing on the relevant research, this paper puts forward a suitable recognition method for students’ classroom behavior based on image processing. Firstly, the authors summarized the steps to preprocess the collected sample images on classroom behaviors, and decided to discriminate students’ classroom behaviors by positioning facial feature points, estimating head pose angles, and recognizing facial expressions. Next, a positioning method for students’ facial feature points was developed based on deep CNN (D-CNN) algorithm and cascading, and the head poses and facial expressions were analyzed and recognized. The proposed method was proved effective through experiments.

Without considering the effects of objective factors like gender, body type, clothing, and teaching environment, the collected images were cropped and preprocessed as shown in Figure 1. 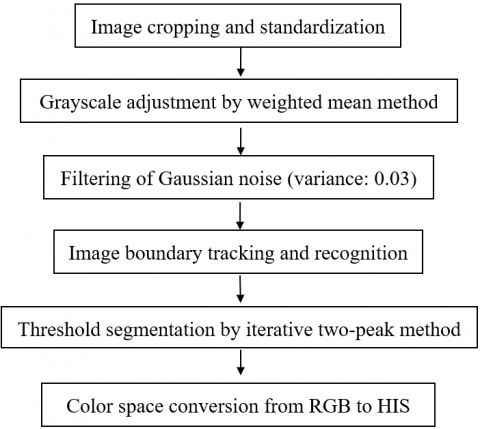 The sample images, captured by cellphones, are color images with a large amount of information and a high degree of complexity. The grayscale of each image should be adjusted to remove the redundant information brought by colors and speed up computer processing. During gray processing, each pixel of the image was normalized by:

Then, the images went through a necessary denoising process to prevent false recognition induced by objective factors like transmission interference, light intensity interference, and equipment errors. The denoising process reduced the noise variance proportionally, without changing the mean level of noise, that is, effectively suppressed noise.

After the boundaries have been defined, each student should be separated from other personnel or the background, laying the basis for accurate feature recognition of students’ classroom behaviors. Here, the iterative two-peak method is employed to delineate and segment the target student and background from the grayscale image with a suitable threshold.

Finally, the essential features of image colors were clustered to create a complete color space with high diversity. Through the change of bases, the RGB (red-green-blue) color space was converted into the HSV (hue-saturation-value) color space. 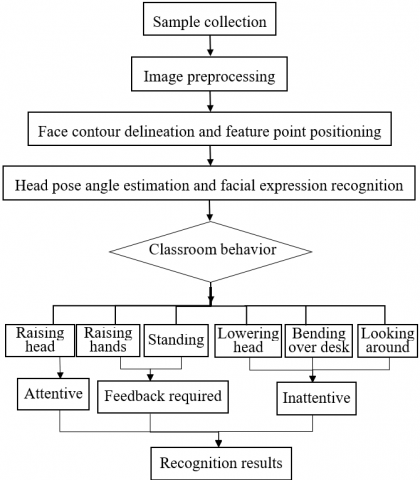 Then, the three primary color components of each pixel in the image can be adjusted to:

To ensure the positioning speed and robustness, the D-CNN algorithm and cascading were adopted to position the facial feature points in four steps:

Step 1. Define the boundaries of the facial organs of the student on the image after illumination compensation.

Step 3. Position the eyes accurately according to the layout of human face.

Step 4. Output the positions of 80 key points, including the facial boundary points and facial feature points.

The cascaded network, consisting of 3 convolution layers and 3 pooling layers. First, the face image of each student was convoluted by the following formula and constraint:

The convoluted image was processed by max pooling with the main regressor, which is formed by a series of m sub-regressors:

The D-CNN algorithm alone may lead to errors, omissions and false recognitions of facial feature points. To solve these problems, this paper further applies D-CNN algorithm and cascading to check the presence of eyes in the facial area. If eyes are detected, it is more suitable to simulate the colors of the eyes with HSV color space than RGB color space. The HSV color space can characterize the brightness of colors. Suppose umax=max(r, g, b) and  umin=min(r, g, b), the RGB can be converted into HSV by:

In addition, the D-CNN algorithm cannot detect facial feature points, if the student’s head is deflected, i.e. the student is lowering head or bending over desk. In this case, the image was further detected by the skin tone model. The color space of the image was converted into YCbCr, which can separate brightness from chromaticity:

To position the facial contours accurately, the kernel size in the last convolution layer was set to 8×8, 4×4, and 3×3. Moreover, the step size was set to 1 to maintain the integrity of local feature points. Then, the position of each facial feature point can be computed by:

The left eye, right eye, and nostrils were selected as inputs for head pose discrimination. The head pose angle was solved by:

where, α, β and θ are the rotation angles about axes x, y and z, respectively. 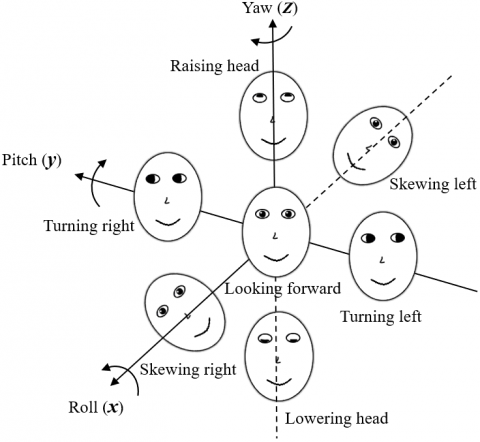 As the student changed his/her head poses, the rotation matrix and translation matrix can be respectively expressed as:

The distance between left and right eyes on the y axis can be derived from the angles in the three-dimensional (3D) space:

where, θY, θP, and θR are the yaw angle, pitch angle, and rotation angle of the student’s head, respectively. 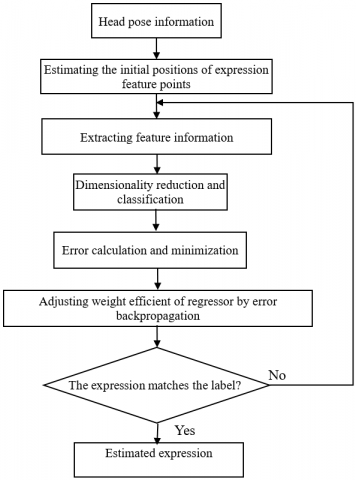 Since some collected images are occluded, the areas in each image that cover facial contours and facial feature points were compared with artificially labeled feature areas. The collected images were removed unless the overlap between the said two kinds of areas is greater than 60%. The remaining images were divided into a training set and a test set. 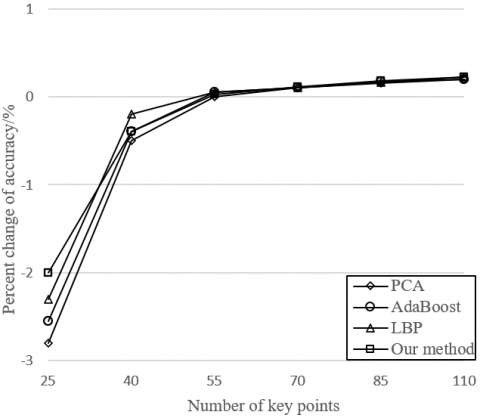 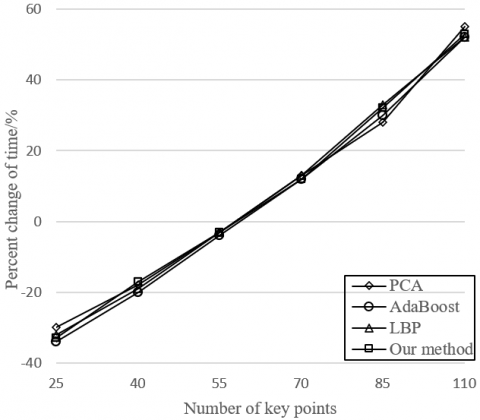 Figure 7. Effects of the number of key points on accuracy and training time

Next, our method and the contrastive methods were separately applied to estimate the yaw, pitch and rotation angles of the heads in the test images. The test results (Table 1) show that our method achieved higher accuracy than the other methods. The superiority is attributed to the fact that our method preprocesses the images and compensates for the error induced by brightness before head pose estimation.

In our method, the D-CNN algorithm and cascading are fully combined to extract rich and diverse head poses and facial expressions from student images. Figure 9 shows the recognition accuracies of our method for different classroom behaviors. It can be seen that the mean accuracy was greater than 93%. This is because our model does not rely on the positioning accuracy of facial feature points. Instead, the facial expressions are recognized through training on estimated head poses; the estimated poses and facial expressions are both considered to recognize the classroom behaviors. Despite relatively high complexity, our method boasts better effect than other methods. 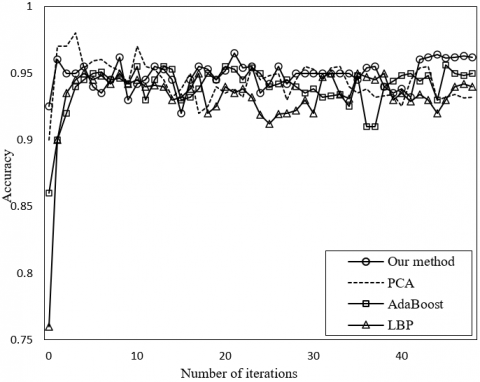 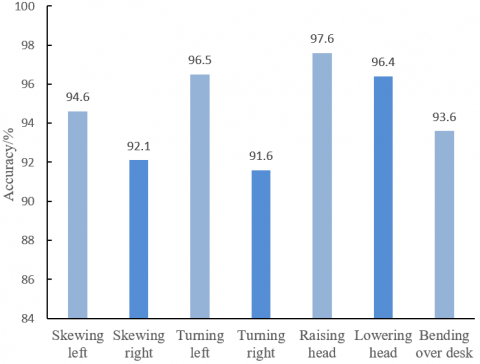 This paper summarizes the typical classroom behaviors of students, and specifies the steps to preprocess the collected sample images on these behaviors. On this basis, the authors decided to discriminate students’ classroom behaviors by head poses and facial expressions, developed a positioning method for facial feature points based on D-CNN algorithm and cascading, and applied the method to solve head poses and recognize facial expressions. Through experimental verification, the proposed method was found more robust and accurate than other popular facial expression recognition algorithms. The experimental results show that our method can correctly recognized 93.7%, 97.6%, 94.6%, and 93.6% of four typical classroom behaviors of students, with a mean recognition rate above 93%. Despite relatively high complexity, our method boasts better effect than other methods.