Classification is the study of methods that are used to categorize data based on distinct classes. We might call the class as targets, labels, or categories. Labels are the data we plan to build a prediction on. Categorization is a fundamental cognitive ability or the activity to distinguish between objects, events, or ideas, and these activities are in general called elements of experience. Category, class, or type are abstract groupings for experience elements that have criteria in common. Basically, classifying or categorizing is meant to simplify and quantize elements of experience so that it can be distinguished and learnable.

In Artificial Intelligence, data classification can be done by three or more methods. Some of these methods are listed as follows:

The fundamental reason for clustering is to group data points that have similar properties, and or features. Features are commonly known values used in prediction. One of the most popular terms in clustering of labeled and unlabeled data is what is known as the k mean. Its main purpose is to cluster vague data.

Regression is a statistical term that is different from clustering. Regression does not involve true and false in classified labels, instead, regression outputs unbound data.

In mathematical relations, optimization is the process of obtaining maximum and or minimum. In AI, optimization is methods or algorithms that are used to apply changes to neural networks attributes. Some of these attributes could be weights, bias and learning rate. Weights are the coefficients to the input data or could be thought of as signal strength. This can be shown in the equation below:

In neural networks there exist input layer that passes the inputs to next layer. Weights are applied in layers to perform transformation. Bias is used to make up the difference between the desired output and the function output. There are many AI optimization techniques have been developed, such as genetic algorithms, elephant herding algorithm. These techniques provide optimal or near optimal solutions.

-Data division into classes as in unsupervised learning.

-Distinguished features selection, and combinations of these stated methods.

Based on the input of features or patterns [4-6]. The classifier can be used to distinguish the inputted data by performing needed actions to output a predicted class. Thereafter it's possible to use the calculated classifier to implement an action [7-9]. In classification without the label, the data is inputted to the model, the model should return a class in a specific place [10, 11]. Classification descriptions and predication are two forms of data mining that can be used to extract models and their use to describe the important data classes or predict future data. From the set of training data, the model learns to predict the class label then we used this set to predict the class label of the new sample. The major goal of classification techniques is to maximize predictive accuracy.

To predict future data direction, the following is of concern as shown in Table 1.

To describe the relationship between variables, we usually fit a line in the observed data. This will allow us to estimate how the output variable changes concerning the inputted variables. To perform multiple line regression, we must use a formula as shown in Figure 1 where y is the observed dependent variable [12-13].

To find a class value using MLR we have to follow up the following phases (see Figure 2). 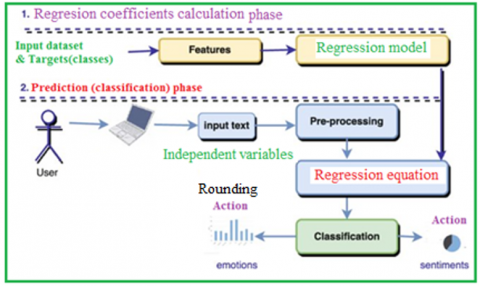 Use the input dataset (features) to build the MLR model, then apply this model to obtain the regression coefficients.

The following steps were used to implement this phase:

-    Obtain the values of the feature (independent variables values).

-    Apply the regression equation to find the class value.

Artificial neural networks (ANN) have been the most useful tool in dealing with many challenging applications. Some of these applications could be time series, regression [16, 17], and clustering. ANN is the type of model for Machine Learning (ML), which is relatively competitive to handle complex and non-complex problems. Variant of ANN is a feed-forward ANN (FFANN) [18, 19].

Feed Forward Artificial Neural Network (FFANN) where each neuron in the input layer is connected to the next layer as shown in Figure 3. FFANN contrasts with the convolutional layer where the output neuron is a subset of the input neuron. A single neuron cell performs two main functions as shown in Figure 4. the first function computes the product sum of the inputs with the weights. the second function computes the output of the neuron which depends on an activation function [20, 21] chosen for the neuron with specified layer. 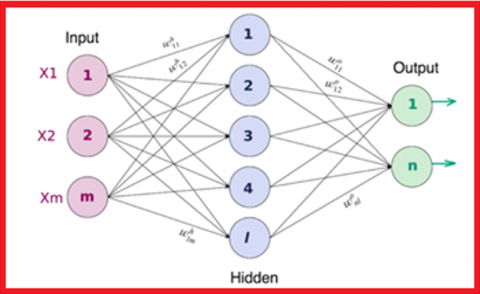 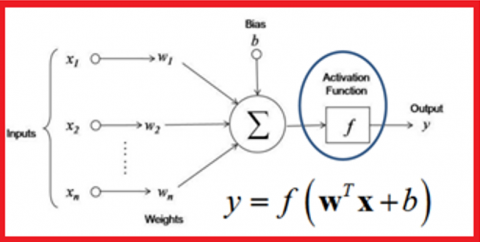 The following steps should be followed for the classification of FFANN (see Figure 5) [22-24]:

In this phase we have to apply the following steps:

2. Perform architecture definition for the FFANN by defining the following:

a) determine the count of the layers.

b) determine the count of neurons in each layer.

c) determine the function of activation for all layers.

3. The FFANN should be initialized.

4. Determine the parameter for the network such that the difference between the target value and the calculated value is close to zero.

5. Net should be trained in the specified features in addition to classes.

6. Verify that the difference between the computed value and the target value is close to zero. If not close to zero, then retrain and increase the number of training cycles. 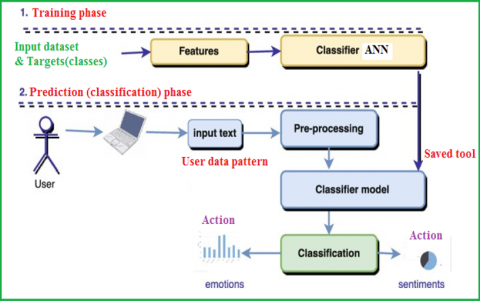 Figure 5. Using ANN as a classifier 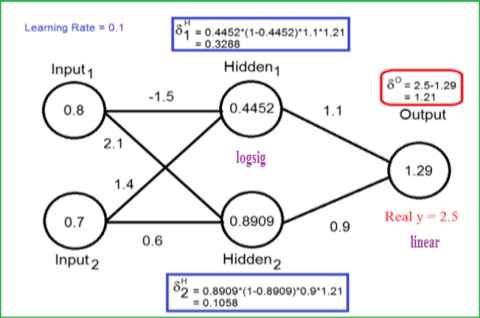 The wheat seeds dataset was used as an input to the created models to generate classification. When the dataset for the seeds includes the species prediction. The seeds measurement was given by wheat of a different kind. This was a two-class classification binary case. The observation for the individual classes was balanced. There exist 210 observations with seven input variables and one output variable. The variable's names are listed as follows:

Nine samples are shown below in Figure 8.

Figure 8. Some samples of the input dataset

First, we apply MLR, the coefficients of the regression outputs are shown in Table 2.

Applying the regression equation using the obtained regression coefficients we found the predicted values of the classes, rounding these values we can obtain the predicted class number for any given value of the independent variables. From the used 210 samples, 36 classes were wrong calculated, with a prediction error ratio equal to 17.14%. Figure 9 shows the target and the predicted classes, while Figure 10 shows the error between them (before rounding). 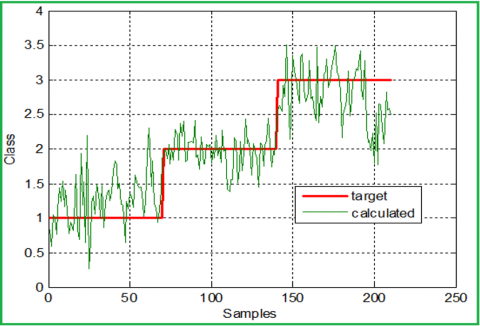 ANN was trained using the same data set and targets, the trained ANN was used to predict the class number using specific features, here the max error obtained was equal to 1.7979e-005, which means that the prediction ratio is very close to 100%. Figure 11 shows the target and the predicted classes, while Figure 12 shows the error between them (before rounding).

From the obtained experimental results we can raise the following facts:

-    MLR model is restricted to a specific prediction problem.

-    To rapidly decrease the prediction error ratio we recommend using the ANN model.

-    Building the ANN model is a very simple process, this model can be easily updated to suit any input data set with any target classes. 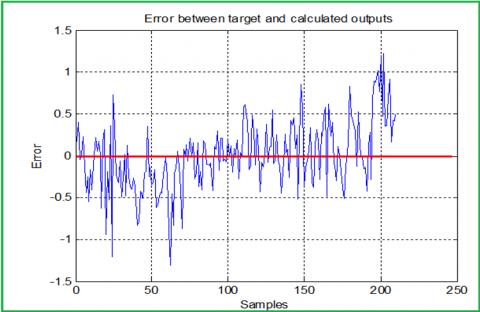 Figure 10. Error between the target and predicted classes (regression model) 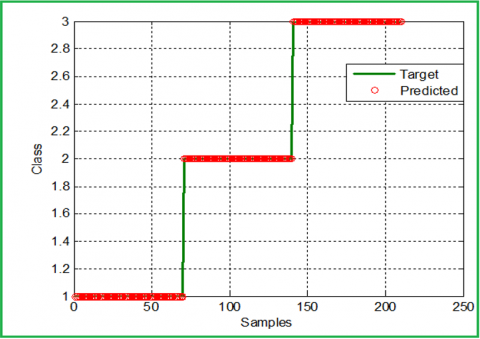 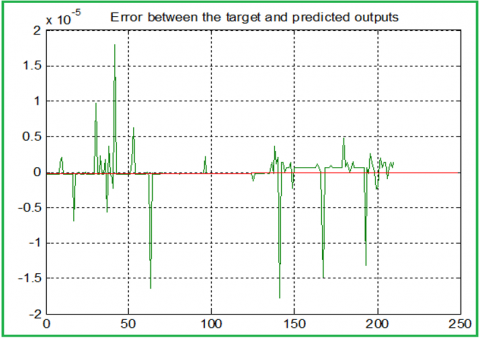 Figure 12. Error between the target and predicted classes (ANN model)

A wheat seeds dataset with various specifications for 3 classes of wheat were used as an input data set for a classification problem, an MLR model was built and implemented to calculate the wheat class number depending on a selected specification, the obtained results were acceptable but with prediction error equal 17.14%. To minimize the prediction error ratio, and to obtain a predicted class number closed to the target class, we recommend using the ANN model. The ANN model decreases rapidly the prediction error, it is very simple to build and update.