A 1D Compression Model for Loess Based on Disturbed State Concept

A 1D Compression Model for Loess Based on Disturbed State Concept

The loess is formed through a complex process. The formation spans across the entire quaternary period. The special formation conditions and environment have endowed the loess with special particle properties, such as obvious columnar joints and large pores. Despite being insufficiently compacted, the loess structure can withstand a huge load like the super solid. This unique structure makes it extremely complex to model the mechanical and engineering properties of loess.

The loess samples were collected from the depth of 5m at some building sites in the northern suburbs of Xi’an, northwestern China’s Shaanxi Province. The samples are drab and in the plastic state, belonging to loess Q3. Each sample was marked on the top and bottom surfaces. 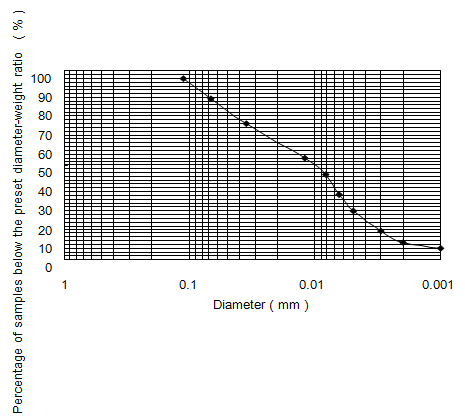 The granular size of loess is often measured by sieving or with a densimeter. Since the loess Q3 mainly contains silt, with a few clays, the sieving method was adopted for loess grading. The grading curve is shown in Figure 1.

Table 1 lists the main physical-mechanical properties of the loess samples, which were obtained through indoor tests on soil mechanics.

Table 1. The main physical-mechanical properties of the loess samples

Under the external load, the microstructure of the material will adjust and reorganize itself from the original relative intact (RI) state to the final fully adjusted (FA) state. This process, accompanied by microcracking or particle movements, can be described by a disturbance function (D). This function describes the disturbance evolution by macro measurement, laying the basis for simulating the constitutive relation of the material. Figure 2 is a sketch map of the DSC. 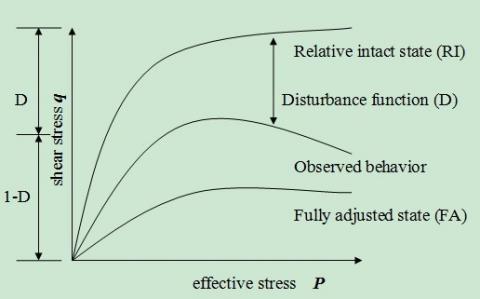 Figure 2. The sketch map of the DSC

During the transition from RI state to FA state, the material is considered a mixture of RI part and FA part, both of which are randomly distributed. The RI state can be described with an elastic or an elastoplastic constitutive model. In this state, the material can bear the elastic stress and strain as a continuum. The FA state can be simulated by the critical state model or any other suitable model. In this state, the crack propagation causes damages to the material, and eventually leads to material failure.

The DSC-based 1D compression model was set up based on the following hypotheses:

Hypothesis 1: The intact loess is in the RI state, and the remolded loess in the FA state.

Hypothesis 3: The deformation is elastic before the stress reaches the yield stress.

Based on the DSC, the material deformation is the sum of the deformations in the RI and FA states:

Since vi=v0-kilnp’, the volume strain in the RI state can be derived from the Modified Cam-Clay Model (MCC):

Since vc=v0-λlnp’, the volume strain in the FA state can be depicted as:

where λ is compression index of remolded loess.

The evolution laws of disturbance function for intact loess and remolded loess can be obtained from equation (4). These laws are displayed in Figures 3 and 4, with w being the water content. 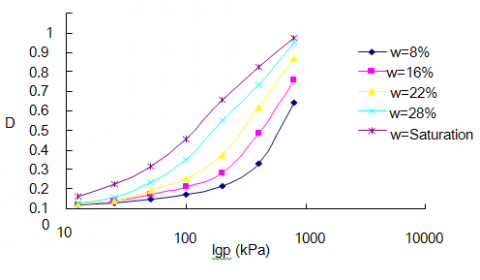 Figure 3. The evolution law of the disturbance function for intact loess 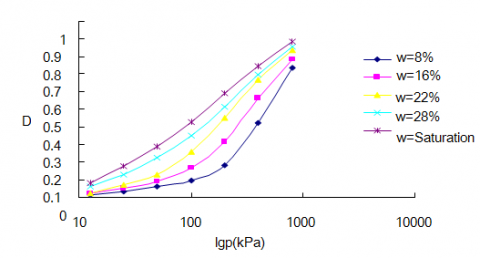 Figure 4. The evolution law of the disturbance function for remolded loess

It can be seen from the two figures that the evolution laws of the above disturbance function are suitable for intact loess and remolded loess:

where A and B are the parameters of the disturbance function.

4.4 Effect of water content on the parameters of the disturbance function

The parameters A and B of the disturbance function were obtained through least squares fitting for intact loess and remolded loess, respectively, with different water contents.

Table 2. The fitted values of parameters A and B 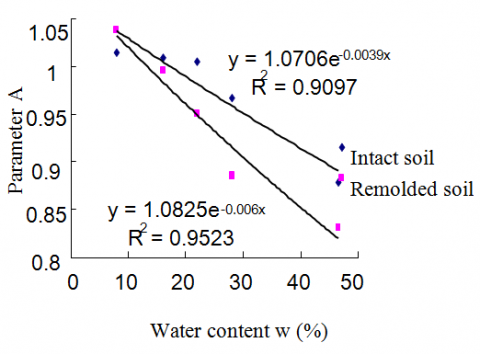 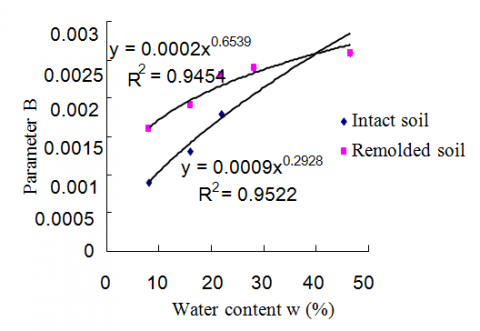 The DSC-based 1D compression model of loess can be constructed based on equations (2)~(5) and the relevant parameters in Table 2:

The established model involves six parameters. The values of these parameters are listed in Table 3 below.

Table 3. The parameters of the DSC-based 1D compression model

The compressive deformation computed by the model were compared with the experimental values on intact loess. The comparison is displayed in Figure 7 below. 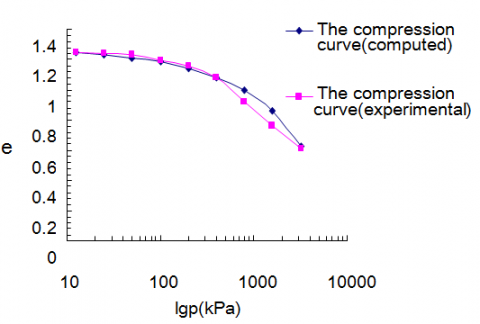 As shown in Figure 7, the compressive deformation computed by our model agrees well with the experimental results, when the stress was relatively small. With the increase of stress, however, the computed compressive deformation was slightly below the experimental results, especially after the stress surpassed the yield stress of the loess. Overall, the two curves in the figure were basically consistent.

(3) Experimental results show that the DSC-based 1D compression model for loess Q3 can accurately describe the effect of water content on the compression properties of loess.

This work is supported by the natural science fund of the university in An Hui province(NO. KJ2019ZD60; NO. KJ2013B223) and  the excellent young talents foundation project in An Hui province (NO. 2012SQRL195) and the talent introduction in He Fei university (NO. 13RC10)  and the provincial quality engineering projects of the education Department of Anhui Province (NO. 2017zhkt383) and  the undergraduate education quality project in He Fei university (NO. 2018HFMOOC04; NO. 2018HFJC05), the authors appreciate the reviewers.

[4] Cudny, M. (2003). Simple multi-laminate model for soft soils incorporating structural anisotropy and destructurations, Proceedings of the International Workshop on Geotechnics of Soft Soils: Theory and Practice. Hamburg: A. A. Balkema, 431-444.