An applications of signal processing are frequently used everywhere in day-to-day life. “Digital Signal Processing (DSP)” has been basic requirement of efficient and accurate arithmetic operations for performing fast and accurate signal processing. Logarithm arithmetic provides an option of that desire. In this work, it is presented an efficient VLSI implementation of an antilogarithm converter by using 10-region error correction. It provides error efficient implementation with significant hardware gain. VLSI implementation of reported and proposed antilogarithmic converters design created in Xilinx ISE 12.1. Antilogarithmic converters (reported and proposed design) are synthesized by using Synopsys design software perform the RTL Synthesis analysis by using package design compiler. This paper presents 10- region converter which considers design trade-off where proposed demonstrates 19.75%, 31.02%, 12.65%, 44.65% and 29.91% respective reduction in comparison of previous design. Error analysis was done using MATLAB for proposed conversion method and reported methods. Suggested antilogarithmic converters have 1.559% error only in comparison of 1.7327% error reported by Kuo et al. On behalf of hardware complexity and error analysis results, it can say that the proposed converters could perform better in comparisons of all aspects of reported design.

In 1962, for the first time, Mitchell proposed add and shifted operation-based algorithm for multiplication by using the single region piecewise linear approximation. It presented first time a logarithmic and antilogarithmic converter. The “Average Error Percentage (AEP)” was 3.85% whereas the error range was varying up to 11.11%. It yielded maximum decrement in percentage error from 11.1 to 1.3 with high accuracy considering identical time penalty of speed with high level power requirement, and “hardware complexity” [6]. Error percent of Mitchell’s method 1-region antilogarithm converter are displayed in Figure 1. 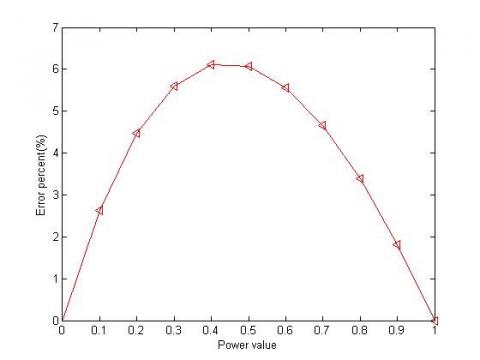 The arrangement of an article is like that: Section 3 presents reported antilogarithmic mathematical concepts. Section 4 describes proposed methodology and detailed hardware architecture. Section 5 explains error and hardware efficiency outcomes and comparative review. The paper is concluded in section 6 where outcomes and limitations of proposed antilogarithmic converter are elaborated.

where, $a$ is considered as fraction part and its lies between 0 to 1. The logarithm called true logarithm of Z is represented by:

The $\lg (1+x)$ value was approximated by Mitchell's method. $x$ is the fraction value called as approx logarithm and it's represented in Eq. (3):

The antilogarithm results the final product, $P$ logarithm which is represented as follows:

4. The Proposed Concepts of Antilogarithmic Converters

In order to improve the error in any straight line, an approach has been employed in which addition of difference between “approximated value” and “actual value”. But, the simple process of adding the difference of “approximated value” minus “actual value” is not able to much exact result. Also, in many cases it is observed that the variation of error in different segment results different percentage of error, i.e. error is not uniform in all condition [18]. For substantial error minimization, split straight lines into several regions and add the average correction difference in a given range. The key concern, however, is that increased hardware penalty is increased in subdivisions. Our main objective of this paper is error minimization with significant hardware gain.

The proposed method is approximated by the following Eq. (7), and “error percent” is representing in Eq. (8). It is based on the piecewise-linear approximation concepts.

Here, Percentage error is explained as the approximated value percentage minus actual value divided by actual value. The approximation errors for each sub regions can be obtained using Mitchell’s method [5]. The proposed design of antilogarithmic converter may be formulated as Eq. (9) and error correction value (ECV) can be like as Eq. (10).

where, i is a positive integer. The Figure 2 shows the algorithm for the obtainment of optimum error coefficients in the proposed Anti-logarithmic converter. 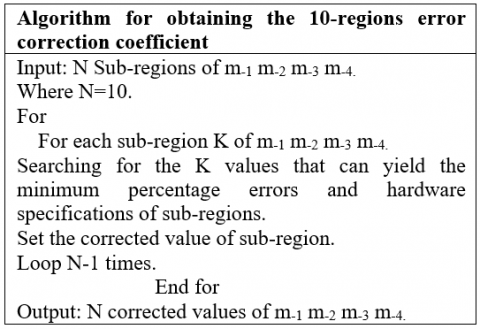 We can use the proposed algorithm for finding “error correction coefficient” for the “10-regions” “antilogarithmic converter”. By using a given algorithm in Figure 2, 10-regions of “approximate schemes” can be represented as Eq. (11), and the “compensation values” as shown below in Table 1.

On the basis of simplified equation found by k-map we can able to decide the hardware architecture of circuit.

The proposed “antilogarithm converter” architecture by using “10-region” “error correction scheme” is shown in Figure 3. Part (a) of Figure 3 shows the architecture of sub-component which has 4 inputs and 4 outputs based on K-map of corrected values and (b) provides the principal block of 10-region error correction circuit. It is combination of “Full subtraction (FS)”, “Half subtraction (HS)” and “Modified subtraction (MS)”. 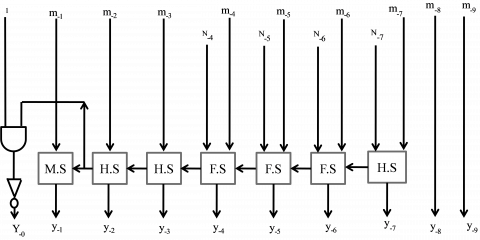 Figure 3. (a) “Combined circuit” of corrected value and (b) Principal block of 10-region error correction circuit

As we realize that Error investigation is the primary worry in logarithm arithmetic on the grounds that it has effectively limited design in correlations of binary arithmetic. Here, based on available equation, simulation is done by MATLAB software. The MATLAB graphs for the proposed method with 10-regions error corrector scheme and antilogarithm converter using 11- regions converter with constant compensation scheme is shown in Figure 4. 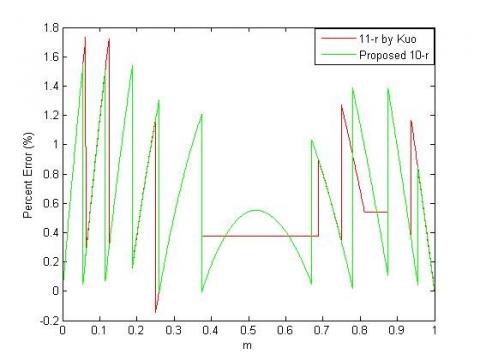 Tabularly 4 presents theoretical and hardware-complexity analyses for simple gates and reported structures for 10-regions antilogarithm error correction scheme. It is revealed from the Table 4 that the employed set of gates i.e., AND, OR, NOT and XOR in the proposed antilogarithm converter structure by utilizing 10-regions error correction scheme are 25,11, 15 and 10, respectively whereas in 11 region constant compensation scheme the employed gates were 35, 15, 26 and 13, respectively. It means that the proposed structure employs 10 less “AND” gates, 4 less “OR” gate, 11 less “NOT” gates and 3 less “XOR” gates. Consequently, through study of “theoretical hardware complexities”, we can say that the “10-region” “error correction scheme” proposed is more hardware efficient compared to the “11-region” permanent compensation scheme that has been published.

In this paper, “antilogarithmic converter” by using 10-region “error correction schemes” had suggested with best possible trade-off in comparison of reported designs. It demonstrates 24.898% percentage error reduction when compared to the proposed design of Juang et al. [16]. In terms of ADP and low energy correlations, the proposed converter with 10-regions shows 44.65% and 29.91%, respectively from existing 11-regions antilogarithm converter. It has 32.89% less error at the cost of 23.73% ADP penalty in comparison to Juang et al. 2-region “antilogarithm converter”. The proposed 10-region “error correction schemes” for “antilogarithmic converter” can be used for real-time DSP based applications.