Heat transfer by convection in porous media has attracted researchers for the last decades. It has various applications such as geothermal, crystal growth, oil industry, drying and building thermal applications. Nield and Bejan has reviewed a detailed literature related to convective heat transfer in porous media [1]. Numerical studies are focused then on a differentially heated porous cavity. Loganathan and Sivapoornapriya [2] studied heat transfer and fluid flow in porous medium. They considered an impulsively started vertical plate. Zheshu et al. [3] investigated a natural convection problem in a square cavity filled with porous media. They used the Lattice Boltzmann method to solve numerically the mathematical model. Horton and Rogers [4] and Lapwood [5] are the pioneers to investigate heat transfer in porous media. Revnic et al. [6] analyzed heat convection in infinite rectangular cavity of bi-dispersed porous medium (BDPM), they used a mathematical model proposed by Nield and Kuznetsov [7] and Rees et al. [8]. Rayleigh numbers investigated were less than 103. This study showed that heat transfer is done mainly by conduction for lower Ra values. Both thermal conductivity and Darcy number have great influence on heat convection central cells. Bahloul [9] studied fluid flow in a vertical cavity with porous media. The vertical walls were differentially heated whereas the horizontal walls were kept adiabatic. Rayleigh number and the aspect ratio had significant effect on flow structure. Kalla et al. [10] investigated numerically heat convection in a very long horizontal porous layer. The porous layer walls were exposed to uniform heat flux. The model of Darcy was used. Finite difference was used to solve the numerical model. The effect of Rayleigh number on heat transfer in the porous layer was investigated. Nawaf et al. [11] conducted a numerical study on transient heat transfer in porous media. The model of Darcy was used with Boussinesq approximation of a standard fluid. The hot wall was exposed to fluctuated heat flux whereas the cold wall was kept at constant temperature. The other two walls were kept adiabatic. Streamlines, isothermals and Nusselt number were analyzed.

However, there are only few works that deal with the effect of porosity in porous media. Thus, the objective of this study is to investigate both heat transfer and fluid flow in a cavity filled with porous media using Darcy Brinkman-Forcheimer formulation.

The air flow is assumed to be two-dimensional in a cavity filled with porous media (Figure 1). Fluid properties are supposed to be constant. The fluid is considered to be incompressible and Newtonian. Boussinesq approximation is applied. Heat generation and radiation effects are neglected in the present study. 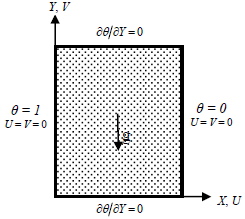 Figure 1. Schematic diagram of the cavity and boundary conditions

The mathematical model is composed of [12]:

Eqns. (1-4) are subjected to the boundary conditions (Eq. 5). They are integrated numerically using a CFD based on the finite volume method.

The effect of mesh size is shown in Table 1. For Ra=105, Da= 10-2 and ε = 0.4, the maximum horizontal velocity, vertical velocity and average Nusselt number are presented with different mesh sizes. The grids have been optimized where a uniform mesh of (182x182) is used in X and Y directions. 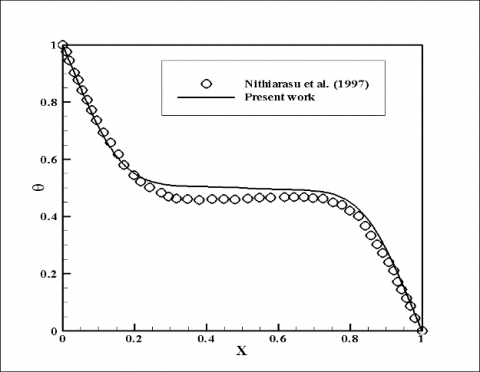 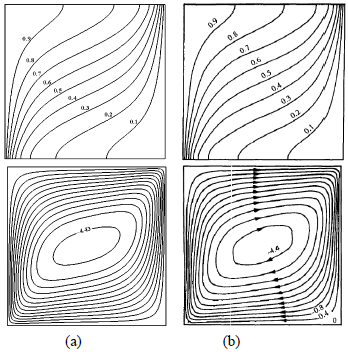 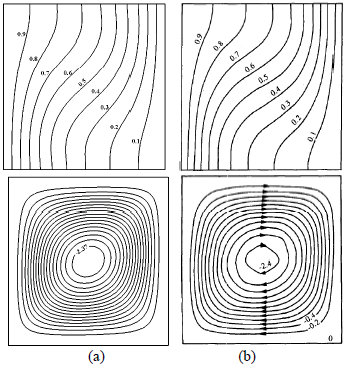 Figure 5 shows the effect of Rayleigh number on the velocity profiles at the middle of the cavity for Da=10-3 and ε = 0.7). Greater values of Ra lead to increasing velocity components. Stronger natural convection is observed near the hot wall. Figure 6 shows the average Nusselt number as function of Rayleigh number for a fixed value of Darcy number Da = 10-3 and a given porosity ε = 0.7. One can notice that for Ra>105, increasing Ra increases strongly the average Nusselt number. Figure 7 shows streamlines and isothermals for different Ra values and this for fixed Darcy number and porosity i.e. Da = 10-3 and ε = 0.7. For low Ra numbers the isotherms are vertical and start getting deformed. The presence of significant convection currents is observed with clockwise cell. The heated wall works to move the fluid upward while the fluid moves downward near the cold wall. Greater values of Rayleigh number result in stronger circulation and the temperature contours are notably deformed which means that natural convection dominates the heat transfer. 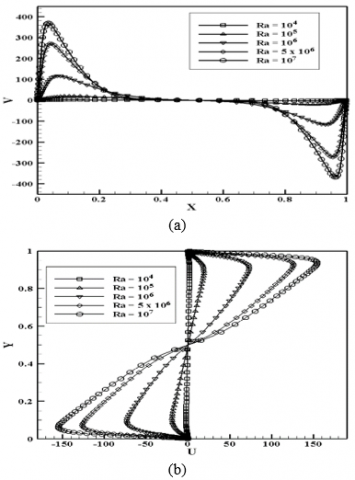 Figure 5. Profiles of velocity components horizontal velocity (a) and vertical velocity (b) in the middle of the cavity for various values of Ra (Da = 10-3, ε = 0.7) 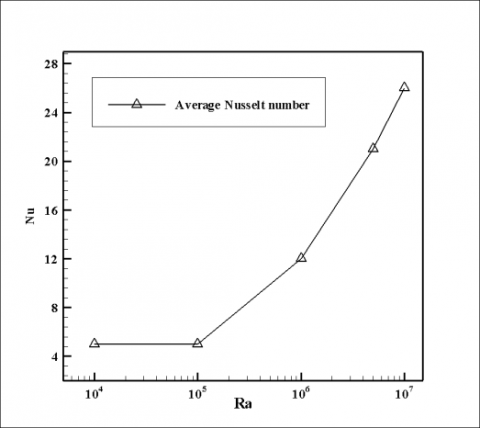 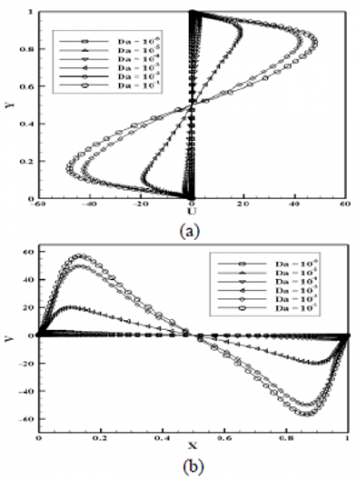 Figure 8. Profiles of velocity components horizontal velocity (a) and vertical velocity (b) in the middle of the cavity for various values of Da (Ra = 105, ε = 0.7)

Figure 8 shows the effect of Da on the velocity profiles at the middle of the cavity. The velocity profiles are symmetric about the middle of the cavity. Greater values of Ra result in increasing velocity components. The maximum values are shown in the vicinity of the hot wall which is explained by stronger natural convection at this region. Increasing Darcy number resulted in lower velocities. 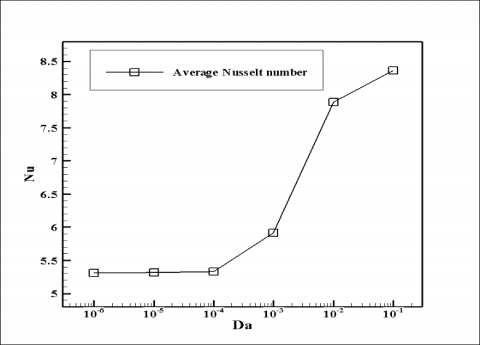 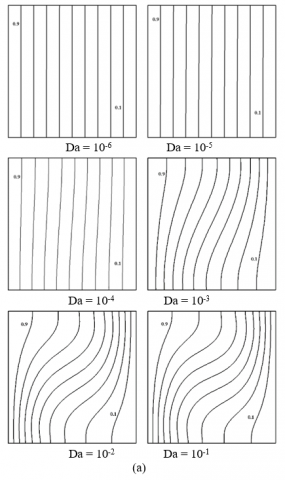 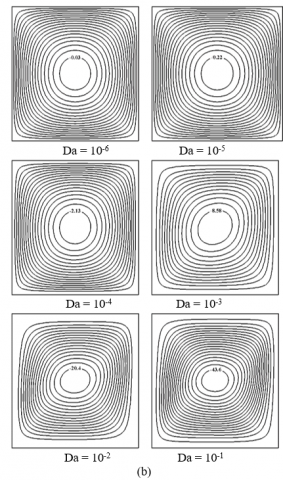 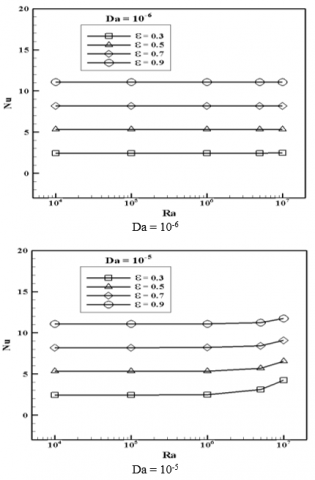 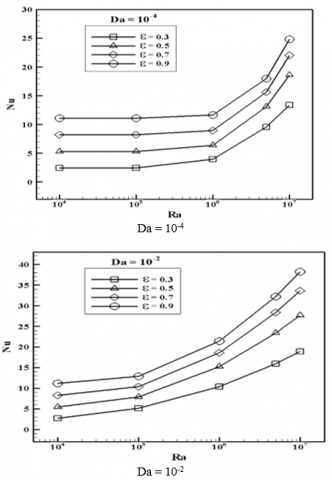 Figure 10 shows streamlines and isotherms patterns in the cavity. One can see that Darcy number has an effect on fluid flow and heat transfer. This effect is related to the cavity porosity. However, for low Darcy values Da = 10-6-10-4, heat convection is not significant due to the friction effect associated with low porosity (Brinkman term). Isotherms are vertical which means that conduction transfer mode is dominant in this case. But, for greater values of Darcy number (i.e. 10-3 à 10-1), convection heat transfer is significant which is accompanied with significant viscous effect that can be seen with distorted isotherms. The porosity of the cavity increases with increasing Da which results in decreasing viscous effect and hence fluid circulation. Streamlines show significant circulation near the cold wall.

This work is supported by the Algerian Ministry of Higher Education and Scientific Research (DGRSDT-MESRS).