To intuitively analyze and diagnose why high railway traffic often occurs, this paper builds a Bayesian network on a rail transit system, for instance, the Shanghai Metro L1, to explore it from different angles such as holidays, mega-events, bad weather and sudden accidents. The fuzzy set theory is also integrated to quantify the conditional probability of some events using the fuzzy languages. It turns out that the Bayesian network constructed can well infer the probability of massive passenger traffic, and diagnose the dominant factors that may cause it. Hereby, the rail transit management authorities can take proper measures against it to reduce the risks the high rail traffic may impose.

As rail transit features large capacity, safe and efficient operation, in the last decade, China's rail construction has boomed. Rail transit gives the people facility on work and life but there is still a risk of huge passenger traffic. As a large-scale communal facility, the rail transport system is complex and has a closed installation. Dense population and special geography are always found around there, hence there is a variety of factors that may cause high passenger traffic in rail transit trains, so that different response measures adopted by the rail transit management authorities vary. Thus obviously, it is particularly important to timely diagnose the causes for the occurrence of huge passenger traffic. Since the Bayesian network is not only a model based on probabilistic reasoning but also a risk quantification method for managing the risks, it enables the inference from incomplete, inaccurate or uncertain knowledge or information. For this purpose, this paper introduces the principle of Bayesian network to construct a Bayesian network for diagnosing why large passenger traffic occurs in rail transit systems.

This paper first builds a Bayesian network to explore why the large passenger traffic occurs. Next, the fuzzy set theory is introduced for the prior probability unknown in Bayesian networks. Then, a positive analysis is carried out on the real railway systems, for example, the Shanghai Metro L1. 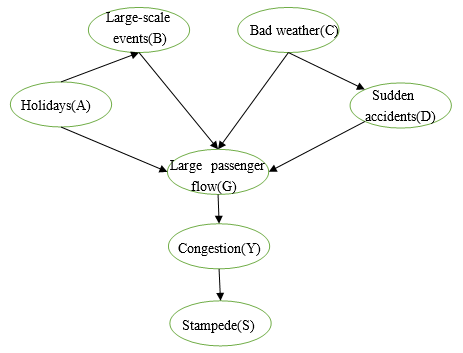 Figure 1. Bayesian network for the cause of huge passenger traffic

3. Probabilistic Analysis and Determination Based on Fuzzy Set Theory

Expert evaluation is one of the commonly used methods that can determine the probability of an event. In 1992, Wickens [13] classified the probability of event occurrence into seven natural languages in the Engineering psychology and human performance, they are Very High (VH), High (H), Fairly High (FH), Medium (M), Fairly Low (FL), Low (L) and Very Low (VL). This paper replaces the natural languages with triangle or trapezoid fuzzy numbers, as shown in Fig. 2. Triangle fuzzy number is represented as A = (a, b, c); trapezoid fuzzy number is A=(a, b, c, d); the membership functions are expressed respectively 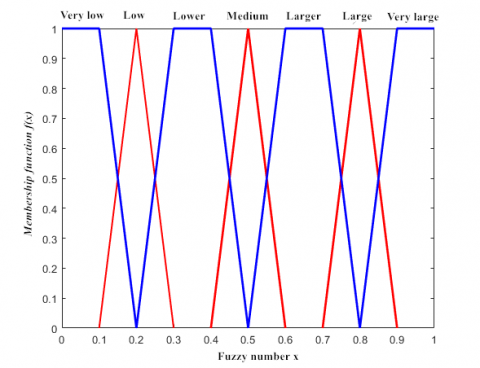 The forms of its fuzzy numbers and λ cut set are shown in Table 1.

In order to minimize the error, this paper uses the arithmetic mean method to synthesize the evaluation results of multiple experts. The comprehensive evaluation of n experts can be expressed as
$Q_i=\frac{∑_{j=1}^mf_{ij}}{n}=\frac{f_{i1}+f_{i2}+⋯+f_{im}}{n}          j=1,2,⋯,m;i=1,2,⋯,n$
where Qi represents the fuzzy occurrence probability of the event i; fij represents the fuzzy value of the event i evaluated by the expert j; m is the number of events; n is the number of experts.

To obtain the prior or conditional probabilities of events at each node of the Bayesian network, it is particularly important to convert the fuzzy value of each event into a certain value. Currently, the commonly used methods for defuzzification include the integral value, center of gravity, weighted mean, etc. [14-15], among which, the integral value method is most concise and convenient, and easy to understand, so that this paper takes this method, and its formula is

This paper takes the Shanghai Metro L1 as a test analysis case to build a Bayesian network for digging out the root of huge passenger traffic in the subway.

4.1 Determine the prior or conditional probabilities of event

With reference to relevant statistics of the Shanghai Metros, the reports of major news media on events such as huge passenger traffic in metros, sudden accidents, the meteorological report of Shanghai Meteorological Bureau and the mega events announcement posted by relevant authorities in Shanghai, this paper makes a statistics on relevant data from massive passenger traffic and sudden accidents occurred in Shanghai Metro L1 from 2013 to 2016, filtered and calculated with the MATLAB software. Then the prior and partially conditional probabilities of event occurrence at each node are available, see below for details. It is TRUE if there is a huge passenger traffic, abbreviated T, otherwise it is FALSE, abbreviated F:

According to the formula (1), the average fuzzy numbers of events X, Y, M, and N can be available

Table 3. Conditional probability of G relative to A and B

Table 4. Conditional probability of G relative to C and D

After determining the prior or conditional probabilities of event at each node, the probability of occurrence of the node event G can be obtained by the constructed Bayesian network, i.e.

The descriptive expression and sorting order of whether events A, B, C, D, G occur in formula (5) are shown in Table 5.

Table 5. Descriptive expression and sorting order of whether events A, B, C, D, G occur

With the constructed Bayesian network, a joint probability formula can be available for the node events A, B, C, D, G, i.e.

4.3 Diagnosis of the cause for huge passenger traffic

After the posterior probabilities of 4 events are compared, it is known that:

(1) If the massive passenger traffic occurs during the off-peak period, the most likely factors that may cause it are the mega events, holidays, bad weather, and sudden accidents. The rail transit manager only needs to diagnose it in the above sequence. According to the diagnosis results, the appropriate measures can be taken.

(2) If the large passenger traffic occurs at the rush hour, although the Bayesian network structure gets more complex, the general diagnosis theory is alike. Since there will be a huge passenger traffic in rush hours, the first factor should be considered as the peak periods, followed by the hosting of mega events, holidays, bad weather, and unexpected accidents.

This paper introduces the Bayesian network into the field of rail transit, and builds it for exploring why there is a higher rail traffic. The fuzzy set theory is also integrated to quantify the conditional probability of some events. Now it is proved that the constructed Bayesian network can well infer the probability that huge passenger traffic occurs, and timely diagnose the dominant factors that may cause such traffic in rail transit. It is indeed significant in safeguarding the smooth operation and imperfecting the risk management of rail transit.