In this paper. is present a new model for heat transfer calculations during airflow through the finned tubes bank in air cooled condenser systems (ACC). The model was correlated with a total of 736 sets of available experimental data provided by ten authors of recognized prestige in the research area. The air flow bathes a package of finned tubes with an inclination of 450 to 600 with respect to the horizontal line. The studies were performed for ST/SL intervals between 0.4 and 2, air flow velocity of 0.1 to 20 m/s, an ambient temperature of 15 to 43 °C, the incident wind speed over the installation between 0 and 45 km/h, the outer equivalent diameter of the bare tubes between 0.019 and 0.035 m, a height of the fins between 2.7 and 7.5 mm. thicknesses of the fins ranging between 2.3 and 3 mm and a number of fins per unit tube length between 315 and 394. The mean deviation found was 6.5% in 84.8% of the correlated experimental data.

It is well known that in a power cycle the heat exchange is a decisive process in its efficiency, since approximately 90% of the heat extracted from the cycle is done through the condensation system. The waste heat from the steam turbine is released to the atmosphere from the cooling system, which, depending on the environmental conditions, makes this exchange from water circulation systems or direct cooling with the environment. [1-3].

In the air cooled condenser (ACC), the refrigerant used is the air. The general theory of heat transfer states that in the transverse cross of a solitary tube or tube package is strongly dependent on the thickness of the film that contours the posterior portion of the tube [4-6, 18]. This problem is known in the literature as a paradox of Schlichting, however, in the available and reviewed sources, there are scarcely a dozen works available that have treated the subsequent bathing of the tubes, according to what is proposed by [5-6].

The first known attempts to solve this problem date back to the year 1927. Several authors of recognized prestige, using combinations of dimensionless groups, empirical coefficients and additional assumptions, took into account approximately the boundary layer thickness, and the drag coefficient generated in the turbulence and the amount of heat transfer generated by the arrangement of the rear rows of tubes.

According to [7-9], the work of Griminson and Zhukauskas, are the reference works of the subject. But in both methods are required to divide the zones of applicability in a dozen regions and despite this complexity the obtained values compute an average error in the best case of 15%. All of this is due to the lack of prediction of the film thickness of the lamellar viscose sublayer [10-12] and to the non-inclusion of its effect on the expressions used.

This problem is further aggravated when the angle of incidence takes components in two directions, that is, it is not perpendicular to the tube package, since a rigorous analysis requires a two-dimensional treatment of the problem [13-15]. Of all the methods known and proposed is the method of Zukauskas who provides the best results in these cases. However, can compute errors of the order of 40%. [7-9].

Given that, there is an appreciable group of experimental quantities reported by different researchers, and the limitations of the current methods in the thermal evaluation of ACC systems by their external portion being known. The authors set themselves the goal of developing an expression that partially solves the constraints of the traditional methods and that allows in an amicable way the obtaining of the average coefficient of external heat transfer in this type of installations.

In general, transverse batting of solitary cylinders (or a package of these) results in flow separation, which is difficult to handle analytically. Therefore, flows of this type should be studied experimentally or numerically. In fact, flow through cylinders and cylinder packs has been studied experimentally by numerous researchers and several empirical correlations have been developed for the determination of heat transfer coefficient [6-8]. The complicated pattern of the flow through a single finned cylinder greatly influences the heat transfer.

Many investigations have been carried out in order to clarify this problem. In figure 1 are given the average values of the experimental results reported by [2-3]. This figure provides the variation of the local Nusselt number $\mathrm{V} u$ depending on the angle $\varphi$ , on the periphery of a finned cylinder bathed by a cross and perpendicular airflow.

A detailed analysis of figure 1 and the available experimental quantities allows us to establish that in the transversal bathing of a cylinder finned by a turbulent airflow, two basic regions are formed depending on the dimensionless number of. The first in the interval $4 \cdot 10^{3} \leq \operatorname{Re} \leq 10^{5}$  and the second in $10^{5}<\operatorname{Re} \leq 4 \cdot 10^{5}$ .

However the second region $10^{5}<\mathrm{Re} \leq 4 \cdot 10^{5}$  its behavior differs from the first. In the first interval, value of $N u$  starts relatively high at the point of stagnation $\left(\varphi=0^{\circ}\right)$ , reaching at this point a high value. $\left(N u_{0}\right)$  but not maximum as happened in the first region. For $0^{0}<\varphi \approx 90^{\circ} \mathrm{N} u$ number present a decreasing tendency very close to a linear function with negative slope $m \approx-1.8$ . The point $\varphi \approx 90^{\circ}$  is where the laminar flow separation occurs, and therefore it is logical that the Nusselt number reaches its minimum value and this point is at once an inflection point. At this point it is true that $N u \approx\left(N u_{0}\right)^{0.92}$ .

For the $N u$ number present a pronounced decreasing behavior, not ruled by a single slope, until reaching $\varphi \approx 140^{\circ}$ , at which point the second minimum of the local $N u$ number is presented, being fulfilled that $N u=\left(N u_{0}\right)^{0.98}$ .

This point is precisely where the separation of the flow occurs in the turbulent flow. For $140^{\circ}<\varphi \leq 180^{\circ}$ , a new growth of the local number as a result of the intense mixing in the turbulent region of the wake, this growth presents an asymptotic behavior to a linear function with a positive slope that oscillates in the interval 4.1$\approx m \approx 4.8$ , is also fulfilled in that, $\varphi=180^{\circ}$  that $N u=(16 / 15) \cdot\left(N u_{0}\right)$ .

The discussions given in the previous paragraphs about the local heat transfer coefficients provide insight into the behavior of this at any point in the finned cylinder and for any operant flow regime, however, have little value in the transfer calculations of heat, since in these the average heat transfer coefficient over the entire surface is required. The main author provides a detailed discussion of this problem in the reference [10]. 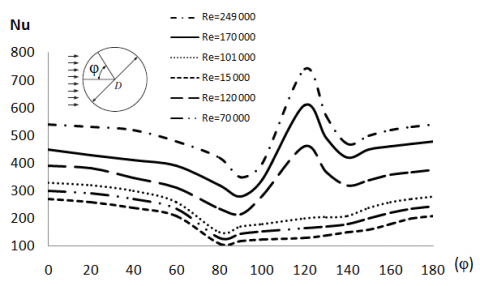 Figure 1. Local Nusselt number variation as a function of the angle in air cross flow over finned cylinder

2.2 Transverse crossing of a bundle of finned tubes

The tubes bank is usually arranged in a row or triangle in the direction of flow, as shown in Figure 2. The outside tube diameter is taken as the characteristic length. The arrangement of the tubes in the bench is characterized by the transverse passage ST. the longitudinal passage SL and the diagonal step SD between the centers of the tubes (see figure 2).

The diagonal step is determined from the following equation:

As the fluid enters the bank, the flow area decreases from $A_{T}=S_{T} L$ to $A_{T}=\left(S_{T}-d\right) L$  between the tubes, and as a consequence, the flow velocity increases [17]. In the stepped arrangement the speed can increase further in the diagonal region if the rows of tubes are very close together. In tube banks, the characteristics of the flow are dominated by the maximum velocity $V_{M \alpha x}$ , which is held within the bank, rather than by the approximate velocity V. Therefore, the Reynolds number is defined on the basis of the maximum velocity as:

Then from Equation (3) it follows that the maximum velocity will be as:

In the stepwise arrangement the fluid approaching through the area A1 (See Figure 2) passes through the area AT and before for area 2AD, as it is wound around the tube in the next row. If it is true that 2AD > AT, the maximum speed still occurs in AT between the tubes and consequently, the VMax in Equation (4) can be used for staggered bundles tube. 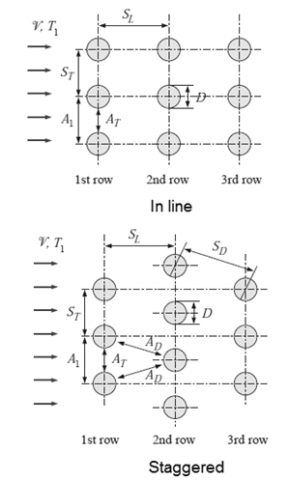 Figure 2. Tubes arrangement in a bank

The conservation of mass can be expressed as (see Figure 2):

Or what is the same.

Figure 3 shows that in the aligned arrays the maximum local heat transfer is located at the point $\varphi=50^{\circ}$ , while the stepped arrangement has two maxima, one at the point of fluid stagnation $\varphi=0^{0}$ and another in the separation of the flow in. It is expected that the presence of two maxima will cause the area under the curve to be larger in the staggered arrangements and therefore, taking into account also the low corrosion and deposition properties of the air, make preferable the stepped arrangement for ACC systems, because with this a higher average heat transfer coefficient is achieved. An inspection of ACC manufacturer’s catalogs confirms that the staggered arrangement is the one used in all marketed equipment.

In any type of arrangement the heat transfer coefficient increases from the first row of tubes to the third, and takes a constant value from the latter. In figure 4 and 5 are plotted for staggered and in-line arrangements, respectively, the average experimental values reported by the authors [9] for the first three rows of a tube package of an ACC. for $\mathrm{Re}=1.4 \cdot 10^{4}$ and one dimension $(2 \times 2) D$ .

The row variation in aligned arrangements does not produce significant changes in local heat transfer coefficient. The authors [8-11], who examined experimentally arrangements with different dimensions, confirm this criterion and for a fixed value of $\operatorname{Re}=3 \cdot 10^{4}$ .The, results obtained confirm that the local heat transfer coefficient follows approximately a common pattern for all the arrangements examined. In figure 6 are plotted the averages available values.

An analysis of 738 sets of available experimental data, reported by 10 authors linked to centers of high prestige [13-15], allowed developing a dimensionally non-homogeneous expression, which was generated by an integral analysis of residues by cross-methods of breaks at intervals, describing with a mean error of the order $\pm 6.5 \%$  in the 84.8% of the available experimental samples.

This equation is given by the following expression:

$V_{\max }$ is the velocity in the narrowest section of the tube package, in m/s

$F$ is the number of fins per linear meter in length of the finned tube.

The value of $V_{m}$ is determined by the use of the following relations:

While the diagonal step is given by:

D is the external diameter of the tubes + fins, in m

d is the outer diameter of the bare tubes (without fins), in m 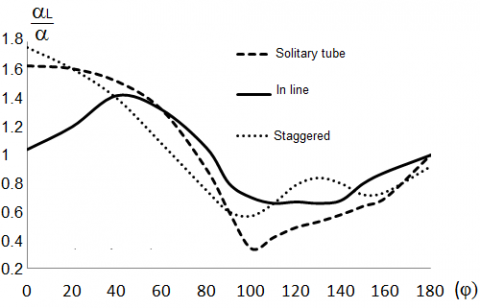 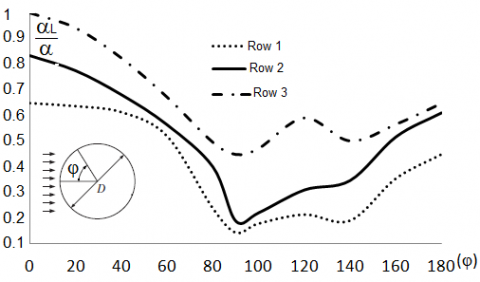 Figure 4. Variation of a local heat transfer coefficient in ACC with staggered arrangement 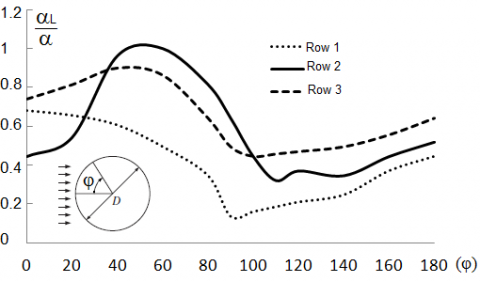 Figure 5. Variation of a local heat transfer coefficient in ACC with aligned arrangement 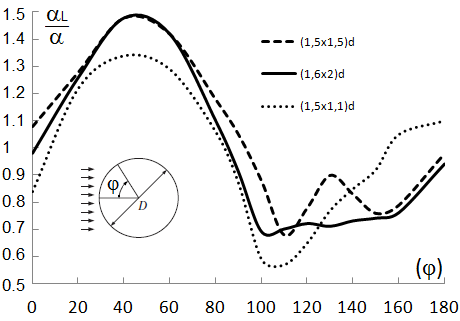 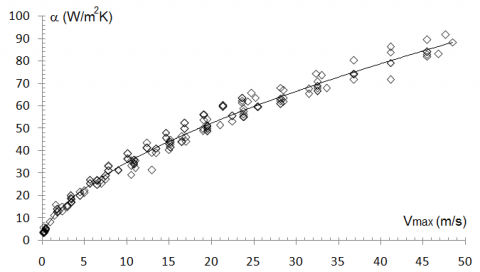 738 sets of available experimental data found a mean error of the order $\pm 6.5 \%$  for 84.8% of the correlated experimental samples. The correlation of the available experimental data with expression (6) was shown in Table 1, and it can be verified that the proposed new model yields satisfactory results in the field of action for which it was developed, reducing in more than half error rates obtained with the use of the Zukauskas or Griminson equations in ACC systems [16-18].

A dimensionally non-homogeneous expression was obtained that responds to the following equation: