In recent years, many smart electricity meters have been put into use, together with their supporting monitoring devices. As a result, a variety of electric big data have been collected in time. With a great potential of application, electric big data is an important type of big data, which introduce the concepts, techniques, and methods of big data in the power sector. Originating in all links of power generation (e.g. power generation, transmission, transformation, distribution, consumption, and dispatching), electric big data can be considered as a set of visualized data involving multiple companies, disciplines, and businesses.

With the grid access of renewable energy, flexible use of active loads, and interconnection between regional grids, the power system has evolved into a typical largescale dynamic system with ultrahigh dimensions. Further, the power system is increasingly coupled with the gas system and thermal system, creating an electricity-centered integrated energy system. To effectively control such a complex system, it is necessary to apply big data technology in the integrated energy system, capture physical states with smart sensors, create data-driven simulation models, and combine assisted decision-making with operation control [1]. These measures help to enhance the operating safety, reform the service model, and innovate energy utilization of the integrated energy system, pushing forward the energy revolution.

This paper presents an analysis approach for electricity consumption based on electric big data. Based on clustering degree and dispersion degree, an aggregate return index was designed to automatically optimize the number of classes, laying the basis of the KMC [16-19]. After that, the effectiveness and correlations of power consumption behaviors were evaluated, and used to formulate a feature optimization strategy, which reduces the computing load of optimizing the feature set through quantification of the relevant indices. Finally, the feature optimization strategy was applied to obtain a suitable feature set from the extracted user samples, and complete the analysis on electricity consumption behaviors.

Sensing is often achieved with embedded sensors, which form a sensor network. The sensor network can collect the various indices and data that affect or reflect the operation state of the grid.

Aggregation is an effective way to realize local processing, while reducing the consumption of communication bandwidth. Once aggregated, the big data can be processed locally to remove redundant information, increase the user capacity of the network, and improve the efficiency of bandwidth utilization.

Before analysis, the collected big data must be imported to the memory or database. During the import, the format and standard of the data should be unified, and the unstructured data should go through storage and modelling.

After the import, the big data need to be preprocessed. It is inevitable for the collected data to contain noises or incorrect items, under the effects of the physical environment, weather, and the aging or malfunction of the monitoring devices. Moreover, some items may be erroneous, omitted, or lost, if the communication environment is harsh. To solve the defects, the relevant data should be denoised, and the lost items be restored. The preprocessing is also called data cleaning.

Big data statistics and analysis involve such technologies as classification, clustering, and correlation analysis. By the time features, the technologies can be divided into offline computing, batch computing, memory computing, and stream computing.

Clustering can be understood as unsupervised classification. The most popular clustering algorithm is the KMC.

The results of big data analysis should go through data mining. Taking data as the center of processing, the big data analysis often outputs results that are difficult to comprehend and not in line with the research purpose. In the worst-case scenario, the results might be useless and even contradictory. To realize data mining, human intervention is needed to filter and purify the results, and transform them into semantic forms that can be understood by human. In light of the features of big data, Mahout implemented data mining algorithms through parallel computing, which greatly reduces the calculation delay. 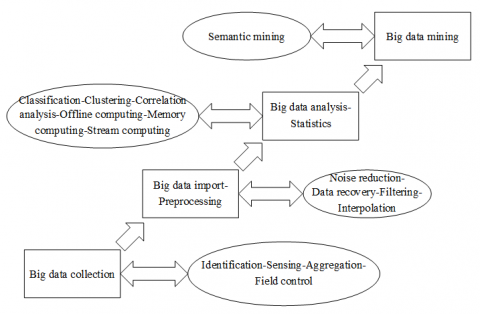 3. Analysis on Electricity Consumption Behaviors Based on Electric Big Data

The commonly used clustering algorithms are fuzzy C-means clustering, KMC, SVM, and competitive learning. Among them, the KMC is an unsupervised learning algorithm, capable of classifying large datasets in a rapid and efficient manner. Therefore, the KMC was selected to identify the patterns of electricity consumption behaviors.

First, the SSE ISSE can be defined as:

where, Ci is the i-th class; x a sample in Ci; mi is the centroid of Ci, i.e. the mean f all samples.

To quantify the aggregate return, the error decrement coefficient βSSE can be defined as:

If sample xi is allocated to cluster A, then its contour coefficient ISC can be described as:

where, C is the sample set; n is the total number of samples.

Using the optimal k value, the KMC was carried out on the samples, producing the class label of each user.

To begin with, the set of all features was taken as the initial candidate feature set Z, which contains n features z. The subset of optional features is denoted as Y. Then, the mutual information I(z,c) between electricity consumption feature z and user class c was defined as the amount of information about user class c under the known feature z, that is, the decrement of the uncertainty of user class c after knowing feature z. The greater the I(z,c), the more effective the feature z.

Thus, the mutual information I(z,c) can be obtained as:

Moreover, the degree of correlation was adopted to measure the correlation between every two electricity consumption features. The degree of correlation ρzy of feature z with feature y in the subset of optional features Y falls in the interval of [-1, 1]. Hence, the two features are more correlated, as the absolute value of ρzy approaches 1, and less correlated, as the latter approaches 0. If the subset of optional features is empty, the ρzy value is 0 by default. The value of ρzy can be calculated by:

where, cov(z, y) is the covariance between feature z and feature y in the subset of optional features Y; σz and σy are the standard deviations of z and y, respectively.

Through the above analysis, each electricity consumption feature z can be evaluated by:

where, $J(z) \in[0,1]$ is the evaluated value of electricity consumption feature z; I'(z, c) is the normalized mutual information between feature z and user class c.

The evaluation function for the subset of optional features Y can be established as:

where, J(y) is the evaluation function for each feature in Y.

The greater the value of J(z), the more effective the corresponding feature is to the analysis of electricity consumption behavior. Therefore, the J(Y) is the sum of the evaluated values of all the features in the subset Y.

Figure 2 explains our feature optimization strategy for electricity consumption behaviors. Firstly, a certain number of samples were selected from all the users, and all the features were extracted from the selected samples. Next, the sample features were evaluated by the established criterion. The features were selected one by one through forward heuristic search: starting with an empty set, each search chooses the feature with the highest evaluated value from the current subset of optional features, and relocates it into the set of selected features until the latter set meets the performance requirements. That is, the selected feature y must satisfy:

Considering both computing efficiency and selection effect, this strategy can achieve a good screening effect with a small computing load. The termination condition (the information of the remaining features is far lower than their redundancy) was defined as follows:

where, D is the ratio of the evaluated value of the optimal optional feature to that of the subset of optional features. If the D value is smaller than the preset threshold T=0.1, the feature optimization will be terminated. The termination condition is highly effective and easy to calculate, without needing to preset the number of features. The feature optimization process is summarized as follows:

The KMC algorithm was employed for clustering analysis. For comparison, the original user classes were obtained from the original load curves before feature extraction. Then, each iterative feature selection of our feature optimization strategy was analyzed in details. Table 1 and Figure 3 provide the information about the first feature selection process.

As shown in Table 1, daily peak-to-valley difference (feature 4) achieved the highest evaluated value by our feature optimization strategy. Figure 3 shows that the classification accuracy was 75.6%, using daily peak-to-valley difference, which was far higher than the accuracy obtained using any other feature. Therefore, the evaluated value of a feature can basically reflect the classification accuracy using that feature. 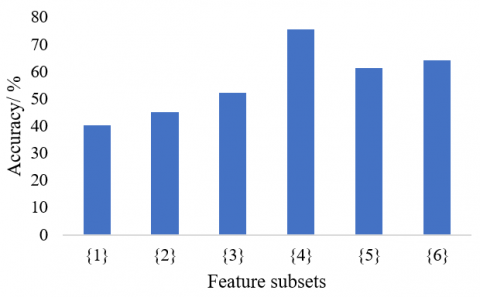 Figure 3. The clustering accuracy of each feature subset in the first feature selection 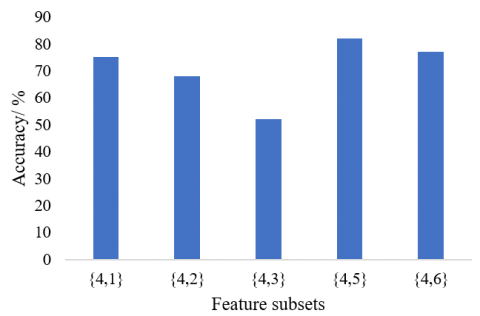 Figure 4. The clustering accuracy of each feature subset in the second feature selection

Table 2 and Figure 4 provide the information about the second feature selection process. Note that the daily peak-to-valley difference was not analyzed, because it had been chosen in the first selection.

Table 1. The evaluated value of each feature in the first feature selection

Table 2. The evaluated value of each feature in the second feature selection