Debris flow is a multi-phase liquid flow with high bulk density and complex components. The velocity of a debris flow is one key part of debris flow dynamics, which is essential to know in order to formulate a plan for early hazard warnings and mitigation. The normal methods of calculating debris flow velocity have their limits due to the difficulty in precisely determining parameters, resulting in unsatisfactory predictions. In this article, we propose a new hybrid prediction model to estimate the debris flow velocity, which is based on the empirical equation of flow velocity calculation combined with a least squares support vector machine (LSSVM) and Particle swarm optimization (PSO). The new method can improve the performance of velocity empirical equations. The result has shown that the new hybrid model is better than the former method and it exhibits high potential for becoming a useful tool for identifying debris flow velocity.

Debris flow is a mass liquid-like movement involving water-saturated, predominantly coarse-grained material which is moving down a confined and steep channel at a high speed [1]. It poses a threat to human life and can cause enormous property damages involving both direct and indirect costs. Debris flows of various sizes, depths, and velocities often endanger human lives and infrastructure facilities, and can result in fatalities [2]. The velocity of a debris flow is associated with run-out distance, superelevation, impact force, and influences hazard assessment [3]. Therefore, it is a very important factor in hazard evaluation and mitigation[4]. Many scholars have done a large amount of work to estimate debris flow velocity, including empirical equation based on the Manning formula, numerical simulation, and Machine Learning theory as widely applied to debris flow velocity analysis.

The velocity calculation methods of debris flow can be categorized into four types [5]. The first is numerical simulation equations [6]. This calculation method is based on the continuum theory, mass and momentum conservation equations, and the velocity formula is derived from basic physical principles. Most parameters of the velocity equation are obtained from laboratory experiments, and some are difficult to obtain and can only be back-analyzed through field survey, which limits its application. The second method is empirical equations, where most equations are derived from the Manning-Stickler equation or the Chezy equation, and is summarized from experimental observations [7]. The third method is back-calculated from super elevation events. The super elevation height is related to the flow surface at the outside and inside walls, which can back-calculate the debris flow velocity. However, this method requires subjective estimates of radii of curvature of bends in the debris flow channel, and the result may change according to various person’s estimations [8]. The fourth method is based on data statistics or the machine learning method, which require a large amount of data, and the result of this method is predicated on velocity influence factors through machine learning theory.

The support vector machine (SVM), developed by Vapnik and his colleagues, is based on the structural risk minimization principle and statistic learning theory (SLT) [9]. Different from other machine learning methods, SVM do not use all available samples and has a smaller structural risk, so it can solve the problem with small samples and achieve a good generalization capability [10]. It is well suited to engineering geological prediction problems and shows good performance in nonlinear high-dimensional prediction [11]. However, having appropriate parameters for the SVM model is crucial to ensure the best performance. Therefore, the optimal method for determining SVM parameters is essential, and the particle search optimal (PSO) algorithm is introduced for the best performance of the SVM model [12].

The empirical or semi-empirical formula for the calculation of average flow velocity have been proposed by many researchers. The factors that account for the largest differences of each equation are related to the properties of debris flow materials, the slope of the flow channel and the depth of the debris flow, all of which are used in every equation. The most well known equations for debris flow velocity calculation are as follows:

where n is the resistance coefficient, R is the hydraulic radius, and S is the slope.

where, H is effective shear depth, $\eta $ is Bingham viscosity.

A widely-used method for mean velocity is the Manning-stickler equation, and all aforementioned formulas are based on it. The Manning coefficient n is adjusted through statistical regression analysis based on observation data, and the empirical formula of the research area is obtained. In calculating the velocity of a debris flow, the Manning coefficient n is subjectively determined, but it is closely associated with the accuracy of the results. Generally, the common equations of flow mean velocity calculation can be described as follows:

where b, c and N are constant values, They can be determined by the research data from the debris flow area.

The least squares support vector machine was developed by Suykens et al. [13]. It is one of the most accessible data mining technologies for small samples based on the structural risk minimization principle. The non-linear prediction problem is resolved by conducting original data into high dimensional space and obtaining the optimal hyperplane. The dimension transformation is conducted by kernel function, so the kernel function is important for prediction accuracy. RBF kernel is selected in this article, and is expressed as follows:

The prediction function of a common fitness curve can be describe as $\ y(x)={{w}^{T}}\varphi (x)+{{w}_{0}}$, where $w$ is the weight vector, ${{w}_{0}}$ is the bias term, $\gamma $ is a constant which should be determined artificially, It is closely associated with the performance of the LSSVM model, and PSO is applied for it's optimization. The structural risk minimization is used to resolve the problem, and it formulates the following optimization problem:

To solve the function, we introduce the Lagrannge multiplier, than the function can be defined as follows:

According to studies worldwide, the general equation of flow velocity based on the Manning formula is as equation: $V=N{{h}^{b}}{{S}^{c}}$ , where N is a constant, h is flow depth, b and c are coefficients with regional features. Previous studies have yielded the following results. In the Chezy equation, b=c=0.5. In the Manning-Strickler equation, b is 2/3 and c is 1/2. In the debris flow velocity research articles, the b value is varied from 1/3 to 1/2, with 1/2 as the most widely used for debris flow velocity calculation. c is varied from 1/6 to 1, and the c value is generally determined as 1/2 or 1/3 [5].

The values of b and c in the equations are influenced by many factors of debris flow materials. In this article, we propose a PSO-LSSVM model to analysis the coefficients in the empirical equation, and the process of velocity calculation is as follows.

1) The original data of debris flow samples are processed by PCA.

2) The b value is fixed as 0.5, and the c values of each samples are back-calculated through empirical formula.

3) Train the LSSVM model with debris flow samples and the back-calculated c value.

validation, and obtain the predicted c value based on the LSSVM model.

5) Fix c value as 1, then calculate b as the same as procedures 3) and 4) instead of c parameter.

6) Put the new predicted b and c vectors into the empirical formula, the velocity of debris flow samples will be obtained through the new equation.

The 50 debris flow gullies in the research area are shown in Table 1. Figure 1 shows the procedure of the improved empirical velocity model in this paper. 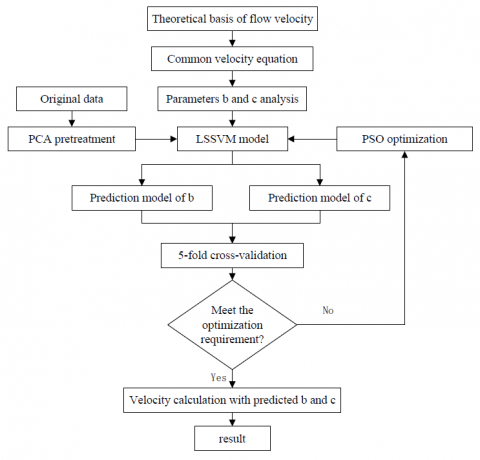 The LSSVM model based on the performance of the empirical equation is sensitive to the b and c values in the empirical equation. In this article, N is determined as 1. The mean MSE with a five-fold cross-validation is used to assess the performance of the SVM prediction model, $MSE=\frac{1}{n}\sum\limits_{i=1}^{n}{{{(f({{x}_{i}})-{{y}_{i}})}^{2}}}$.

The 50 debris flow prediction samples and parameter b, c and its relative velocity results are shown in Table 2. The parameters b and c are predicted by PSO-LSSVM. The origin is the velocity of the field survey. ESb and ESc are the predicted values of b and c through PSO-LSSVM. The bv is the calculated velocity with ESb determined through the general equation of flow velocity ($V=N{{h}^{b}}{{S}^{c}}$). At this time, c is fixed as 1. The cv is the calculated velocity with ESc, and b is fixed as 0.5. The cv is better than bv according to the MSE and MAE.

Table 2. Debris flow velocity estimating with predicted b or c parameter by the empirical equation

In comparison, b is predicted and c is fixed as a constant, or c is predicted and b is fixed as a constant. Table 3 shows the final result of debris flow velocity calculation based on ESb and ESc. Both ESb and ESc are substituted into the general equation of flow velocity, and the final result of debris flow velocity is calculated by the improved velocity equation. Table 3 shows the result of velocity bcv calculation based on ESb and ESc, with the MSE and MAE being smaller than the other methods shown in Table 2. This table provides the best evidence showing that the improved empirical model has the capability to predict debris flow velocity more efficiently and accurately than only b or c can predict. Figure 2 and Figure 3 show the fitness curve of the PSO process, with lower fitness numbers indicating better performance.

Table 3. Debris flow velocity calculation based on both predicted b and c 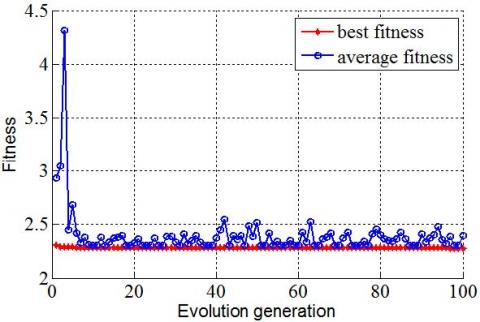 Figure 2. Fitness curves of optimization of b through PSO 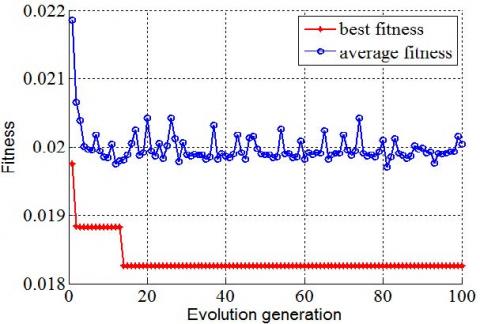 Figure 3. Fitness curves of optimization of c through PSO

3) The number of influencing factors in debris flow velocity is too numerous. According to the analytical and empirical algorithm, the main factors of debris flow velocity are slope gradient S, particle mean diameter D50, flow depth h and density. The parameters b and c are related these factors, but the relation formula is still unclear.

4) The parameters b and c are predicted by LSSVM respectively, and the velocity is calculated with the predicted value. When b is predicted by LSSVM, c is selected as the common value 1; otherwise, b is 0.5. The two methods both have a good performance for debris flow velocity prediction.

5) The predicted values of b and c are lastly substituted into the formula together for the velocity calculation, and the MSE and MAE are the best compared with the other methods, which shows the validity of the improved method.