Concrete is the most widely used artificial material for civil construction. This composite material is prepared by mixing cementitious material, aggregate, and water in a proper ratio, and leaving the mixture to harden for a period. The aggregate in concrete mainly includes natural stones and river sands. Over the years, the stones and river sands in nature have gradually depleted, posing a great impact on the environment. Therefore, many scholars engaging in construction materials have attempted to develop recycled coarse aggregate concrete (RAC), that is, prepare recycled coarse aggregate from waste concrete and use them to make new concrete [1-3].

The above studies mainly focus on the working performance and mechanical performance of the RAC, artificial sand concrete, and polypropylene fiber RAC. With the depletion of natural sand resource, many countries have banned the exploitation of this natural resource, which contradicts with the growing demand of sand for construction. It is an urgent task to replace natural sand with artificial sand, and substitute natural coarse aggregate with recycled coarse aggregate.

Therefore, this paper aims to clarify the working performance and mechanical performance of artificial sand RAC (RCAS), laying the basis for the development of green concrete, save natural resources, and protect the environment. To this end, 100% artificial sand and 100% recycled coarse aggregate were used to replace natural aggregate, producing a recycled concrete. Then, a certain amount of polypropylene fiber was added to the recycled concrete, creating a novel polypropylene fiber RCAS (P-RCAS). A total of 90 specimens were prepared for the P-RCAS, and subjected to tests on working performance and compressive strength. Through the tests, the authors investigated how the fiber content affects the working performance and mechanical performance of recycled concrete, and determined the optimal fiber content. In addition, the failure process and failure mode of the P-RCAS were studied in details. The research findings provide a reference for the engineering application of the P-RCAS.

The following materials are used in our research:

(2) Coarse aggregate: the continuously graded recycled aggregate obtained by jaw crushing and sieving of waste concrete with a rebound strength of 46MPa. The image and performance indices of the coarse aggregate are shown in Figure 1 and Table 1, respectively.

(3) Fine aggregate: artificial sand with 15% stone powder. The image and performance indices of the fine aggregate are shown in Figure 2 and Table 2, respectively.

(4) Fiber: monofilament polypropylene fiber. The image and performance indices of the fiber are shown in Figure 3 and Table 3, respectively. 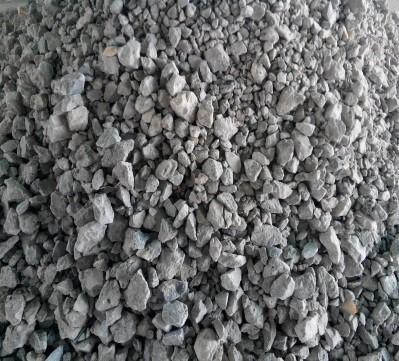 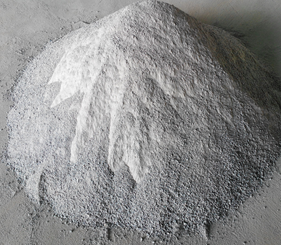 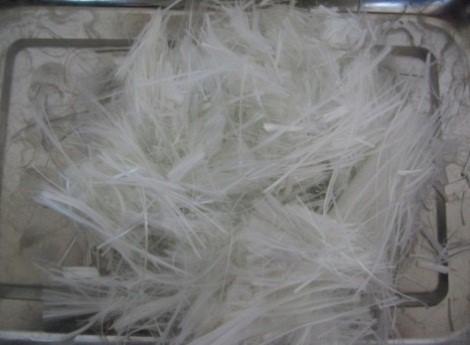 The concrete specimens of three ordinary strength levels were prepared according to the Specification for Mix Proportion Design of Ordinary Concrete (JGJ55-2011) and Technical Specification for Application of Fiber Reinforced Concrete (JGJ/T 221-2010). The concrete of each strength level was mixed with polypropylene fiber. The mix ratios (mass ratios) are listed in Table 4. 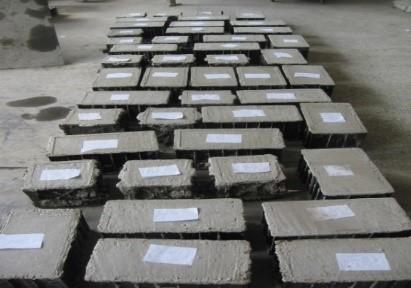 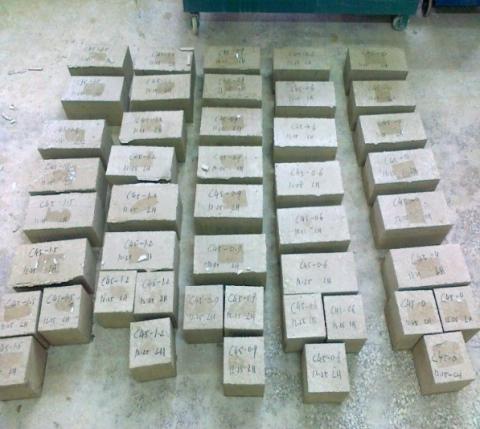 Figure 5. Some demolded and numbered specimens

According to the Standard for Test Method of Mechanical Properties on Ordinary Concrete (GB/T50081-2002), the specimens were subjected to multiple tests on cube compressive strength and axial compressive strength. After removing the outliers, the mean values were taken as the test results (Table 5).

Figure 6 shows the relationship between fiber content and slump of specimens with three different strength levels. It can be seen that the maximum slump appeared at the fiber content of zero; with the growth in fiber content, the slump exhibited a gradual decline. As the fiber content rose from 0kg/m3 to 1.5 kg/m3, the slumps of C25, C35, and C45 specimens decreased by 21mm (32%), 14mm (27%), and 11mm (30%), respectively. 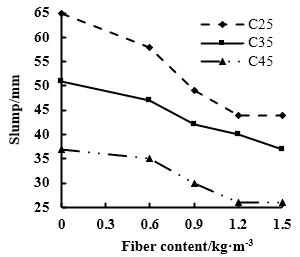 The addition of fibers makes the mixture more viscous and less fluid. But the workability of the mixture meets the requirements. By dry mixing, the polypropylene fibers are evenly distributed in the concrete, and closely connected to cement mortar. In this way, both surface bleeding and aggregate segregation of the cement are suppressed, reducing the number of voids and the moving space of aggregates. The measured slump of each specimen falls in the specified range of plastic concrete, indicating that the P-RCAS meets the requirement on working performance. 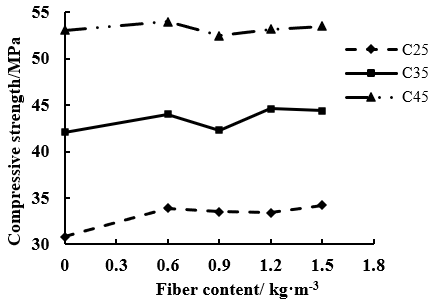 Figure 7. The relationship between fiber content and compressive strength

Considering the impacts of water-cement ratio and fiber content, a binary regression model can be established for the strength of the P-RCAS:

where, fcu is the compressive strength of P-RCAS cubes; ρwc is water-cement ratio; ωppf is fiber content.

The coefficients a, b, and c can be obtained by the least squares (LS) method from the measured data:

The R-Squared (the square of the Person Correlation Coefficient) R2=0.98, indicating that the above equation has a high goodness-of-fit. Thus, the cube compressive strength is strongly linearly correlated with water-cement ratio and fiber content. The theoretical result only deviated from the measured data by 2% at the maximum.

In the previous tests, both P-RCAS and RCAS specimens suffered from brittle failure. The failure mode was analyzed with C35 concrete specimens as examples. Figure 8 compares the pre- and post-failure images of RCAS3500 (without fibers) and P-RCAS3515 (with fibers).

For the RCAS specimen, visible micro cracks appeared on the surface, when the load approximated the maximum load. Due to the hoop effect, the micro cracks expanded and penetrated the specimen, once the load reached the maximum level. In some places, the concrete bulged and peeled off from the matrix, revealing the severity of brittle failure.

For the P-RCAS specimen, the failure process slightly differed from that of the RCAS, owing to the addition fibers. The fibers impeded cracks in the matrix, absorbed the cracking energy, and withstood part of the stress. Therefore, it took a longer time for the cracks to emerge, expand and penetrate the specimen. Finally, the specimen suffered from brittle failure with certain plastic deformation. The concrete did not bulge or peel off as severely as that of the RCAS specimen. Overall, the P-RCAS specimen was more complete than the RCAS specimen, showing better plasticity and ductility.

(1) With the increase of fiber content, specimens on different strength levels only suffered limited slump loss; the mixture had good cohesiveness, water retention and fluidity. It is possible to prepare plastic concrete with good workability by adding polypropylene fiber into the RCAS.