Geological Reserve Estimation of Limestone Deposit: A Comparative Study Between ISDW and OK

Geological Reserve Estimation of Limestone Deposit: A Comparative Study Between ISDW and OK

Geostatistics plays an important role for reserve estimation in mining industry. Geostatistical tools became popular because of its high degree of accuracy and time saving process for estimation. The uncertainty of geological deposit can be populated by geo-statistical tools. The limestone ore deposit was studied in this paper. The assay value of individual constituents of limestone ore i.e CaO, SiO2, Al2O3 and Fe2O3 were determined for a block by using Inverse Square Distance Weighting (ISDW) method. The average assay value of those individual constituents were 45.85, 15.94, 1.56 and 0.82 percentage respectively. The assay value of CaO was also estimated by two linear method of estimation i.e ISDW and Ordinary Kriging (OK). The assay value of CaO were determined 45.85 and 44.67 percentage respectively. The assay values were properly validated and concluded accordingly. The application of ISDW and OK were implemented to build the resource model together in order to assess the uncertainty of the deposit. Grade estimation by using different geo-statistical techniques are done by SURPAC mine planning software.

Mine planning is necessary for determination of total reserve and calculation of average grade value for a particular deposit in order to make it reality. Planning is required for quantifying the resources and bring them by giving some weightage. From the planned data the management can schedule the particular zone where to mine out the mineral at a particular time. Sometime high-grade ore is asked by the management for blending in order to fulfill the demand of market.

In block model each unit block contains geological attributes i.e. grades of different minerals, specific gravity, partial percentage, rock code, lithology which is predefined before framing a block model. After geological block modelling, the conversion of block economic model by incorporating financial parameters such as mining and process cost, commodity price etc. Block economic model which gives a platform for mine planning and design process [3]. For the estimation process the source of information mostly comes from a restricted number of exploratory boreholes. Due to unavailability of data the whole blocks are not contained the grade value [4]. In resource estimation the value of unsampled blocks are determined from nearby boreholes.

In the field of mine planning and designing several works has been done by various researchers using this software. The mismatch of grade-tonnage and variation in estimation of blocks can be minimized with the help of geo-statistics [5]. Ore body modelling and comparative study of different geo-statistical tools for reserve estimation has been studied [6].

The distance between different sample point to the estimating points are considered in inverse square distance weighting technique in geo-statistical analysis [7]. The assumption is made on the basis of, sampled points have the same distance to the unsampled point will show the equal resemblance [8]. The resemblance of assay value depends on the distance between the two sample points. This method of estimation depends upon the weight of the sample point as well as the distance between the two points to be calculated. The inverse square distance weighting technique is coming under the deterministic method of interpolator [9]. The method of estimation is very simple and easy to implement in mine planning sector.

An attempt is made for relative study of linear geo-statistical techniques for resource estimation of a limestone ore deposit in this paper (Figure 1). Both inverse square distance weighting and ordinary kriging estimators are used for assessment of whole ore block after assigning attributes and constraints as well. 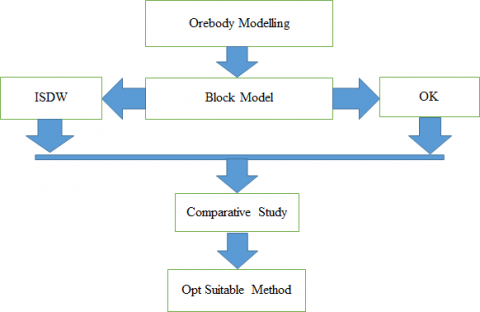 Figure 1. Illustration of the application of estimation

The borehole data of a limestone deposit is used as the main input data to showcase how this software is applied in reserve estimation for both geo-statistical methods. The drill hole database is created and those drill holes are shown in a contour plan (Figure 4). Down the drill holes the assay value of CaO was indicated in order to classify them (i.e. high grade, low grade and waste) along the drill hole depth with different colors (Figure 3). The assay value of every section along the length of the drill hole is shown with unique number for representing the grade of that particular section.

In the process of electronic ore reserve estimation, total 156 numbers of exploratory bore hole data from a limestone ore deposit is used (Figure 2). Geological database is generated by using exploratory bore hole data. The assay values are composited within the interval of 1.5 m down the hole with minimum 75% utilization of sample. Composited assay values are taken for development of geo-statistical model.

Finally, estimation is done by using both linear geo-statistical techniques for getting the mean assay value of the deposit. The statistical data of limestone ore shows the frequency of population in the data set for initial knowhow about the deposit.

SURPAC software is used for solid ore modelling as well as block modelling in this work. For better grade determination block model is normally developed because the whole focused area is divided into smaller blocks. The smaller blocks are investigated systematically for getting good resource estimation. 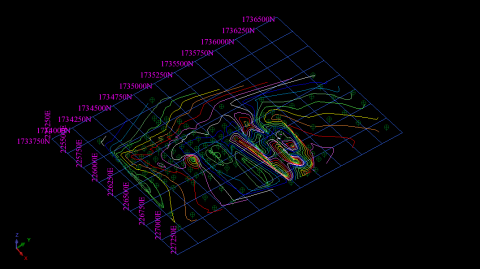 In every 2 m run length down the hole, raw data has been composited. From the composited assay value, a statistical report (Table 1) is generated for analysis purpose. Several frequency of grade values is found from the histogram (Figure 5). The grade values are of negatively skewed. 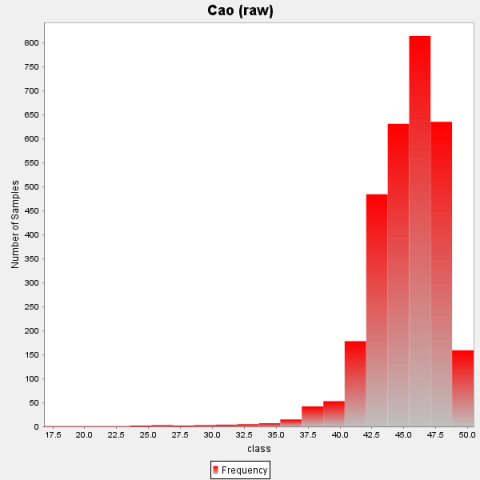 Twenty numbers of histogram bar are drawn for the frequency analysis of assay value. Statistical analysis is required to provide the idea about the presence of outlier as well as bi-modal distribution in the data set. Outlier is removed from the data set for variogram analysis in order to minimize the error in estimation.

The solid modelling or 3-D modelling is the visualization of the extent of orebody that is captured within the boundary limit (Figure 6). The individual segment of mineralization zone was triangulated in order to form the solid ore body by sectioning followed by digitizing. The segments were undergone different cleaning test (i.e. cross-over, duplicate points, spikes) before forming a solid ore body. After completion of the test, the segments were joined one by one to form a solid ore body. At last, the solid ore body was validated with no error. After validated the ore body model, the area and volume of solid report was obtained which is in Table 2.

Block modelling is the basic need for reserve estimation process. For validation of the block model, comparison was made in between volume of block model and volume of solid ore model. For generating a block model different steps which are followed by using SURPAC software.

(a) Creation of empty block model

(b) Adding of attributes

Each block information in the block model were added in the empty blocks by attributes [12]. They included the assay value of each mineral constituents, specific gravity, rock code, partial percentage. Value of attribute can be edited for further modification of estimation during the whole process

The selections of blocks are controlled by adding constraints in the block model. The information was retrieved from the block model by selecting the constraint for viewing the model in graphics [13]. One or more spatial objects are logically combined for declaring a constraint. Different logical operators are employed to get the value intersected with in the block model. Finally, the operation is carried out on those chosen blocks [14]. Some of the constraints types used were: block attribute such as the grade, which was used to define the waste, high grade, low grade and medium grade ore using a set cut off value.

Some model attribute values were filled directly as background value which will be reflected in the block model directly [15]. The grade value had to be assigned by interpolation method.

Inverse square distance weighting technique and ordinary kriging method were used for calculation of the block value as well as the volume and tonnage.

where: Zestimated – Point of sample value to be estimated;

Figure 7. Block model of the deposit showing colors by attribute in ISDW method

Figure 8. Block model of the deposit showing colors by attribute in OK method

The most frequently used kriging technique is Ordinary Kriging. It is a geo-statistical tool which is defined by the abbreviation BLUE- “best linear unbiased estimator”. It is “best” because the errors in variance can be minimized, “linear” because the estimation values are linear weighted combination of the existing data, and “unbiased” since it attempts to have the error equal to zero [18].

Kriging principle is to estimate values of a delegated variable at a selected location, based on the surrounding existing values [19]. A relevant weighting coefficient is assigned to the selected locations which represents the influence of particular data on the value of the final estimation at the selected grid node [20].

The linear external parameter i.e. Lagrange factor (β) is used to minimize the kriging variance in Ordinary Kriging method. The errors can be minimized by the limiting factor and assessment becomes impractical. The sum of all weights equal to 1, when evaluating the Ordinary Kriging technique [21]. The matrix form of OK equation is given below,

α1, α2....... αn-assigned weight values to the data set. The percentage of CaO value is shown by different colors for each and every block which is shown in Figure 8. 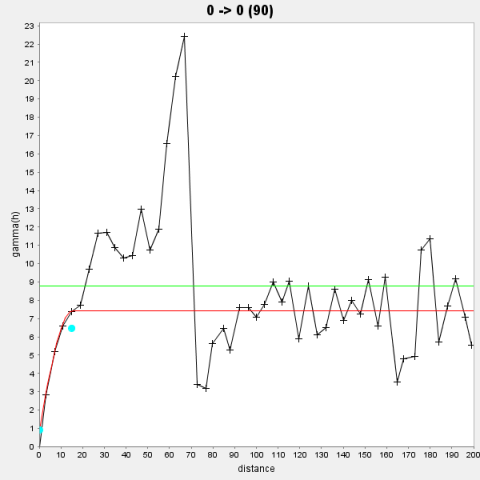 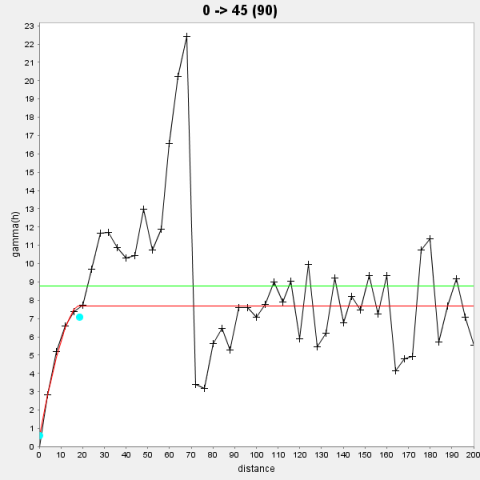 Conventional resource estimation was the key process to measure the resource quantitatively. This procedure was the prime estimator and time-consuming process for resource valuation. In order to simplify the estimation process, the application of computer in mine planning and design was involved. In the present study the ore block model was estimated by both Inverse square distance weighting and ordinary kriging methods. The estimated statistical data from both the estimator were related with the basic statistics data. From the comparison it was found that, the inverse square distance weighting method for this resource block got overemphasized. Estimated % of CaO by both ISDW and OK techniques along with the % of CaO in raw data is given below in Table 5.

From the study it was revealed that, comparing the grades of CaO for the mentioned block using the two different grade estimation techniques, found that the grades by, Inverse Square Distance Weighting and Ordinary Kriging methods come out to be 45.85% and 44.67% respectively. The total volume for the 3-Dimensional solid ore model is 87622041 m3. The overall surface area of the solid model, i.e. 4544957 m2. Inverse Square Distance Weighting method overemphasizes assay value in comparison to ordinary Kriging.

This work is supported by Department of Mining Engineering, IIT (ISM) Dhanbad for providing us with all the necessary facilities and constant encouragement. We also place on record, our sense of gratitude to one and all who, directly or indirectly, have lent their helping hand in this venture.

[6] Krige, D.G. (1951). A statistical approach to some basic mine valuation problems on the Witwatersrand. Journal of the Chemical, Metallurgical and Mining Society of South Africa, 52(6): 119-139.