As urbanization picks up speed in China, more and more metro and highway tunnels are constructed to ease traffic congestion and resource shortages in urban areas. The boom of urban tunnel construction brings convenience to our lives and transportation, while posing great challenges to fire safety. The tunnels are often narrow, long, and relatively closed. Once a fire occurs, there would be a huge loss of life and property. Smoke and toxic gases, as the deadliest factors of fire, are responsible for 85% of the casualties in the fire [1, 2]. Natural smoke ventilation is widely favored by designers, because of its low cost in construction, operation, and maintenance phases. Therefore, the natural smoke ventilation via shaft becomes a popular option in tunnel construction.

In recent years, the research on the smoke movement features and smoke control of fire mainly focuses on the plains [3-7], i.e., considers the normal pressure environment. However, relatively few scholars have discussed the fire under low ambient pressure comprehensively [8-10]. Each year, new tunnels are completed in high-altitude regions, which feature low pressure and low oxygen content. Tunnel fire in these high-altitude tunnels would be even harder to prevent and put out. Therefore, it is of practical significance to study the flow features of the smoke in tunnel fire in different low-pressure environments.

This paper carries out numerical simulations of tunnel fire on Fire Dynamics Simulator (FDS), a computational fluid dynamics (CFD) software package. The combustion rate and temperature field distribution of shaft tunnel fire were tested under different pressures. On this basis, the authors discussed the influence of different ambient pressures on the smoke movement features and smoke control effect of tunnel fire. The research results provide a reference for the construction, fire prevention, and smoke control of high-altitude tunnels in low-pressure environments.

The tunnel fire was simulated by FDS. A single bidirectional tunnel was modeled: the x-direction length, y-direction width, and z-direction height were set to 100m, 10m, and 5m, respectively. The shaft was deployed at 20m downstream the fire source. Figure 1 shows the structure of the tunnel.

The fire source is located on the longitudinal centerline of the tunnel. The length and width of the fire source were set to 4m and 2m, respectively. It is assumed that the fire source is a superfast unsteady t2 fire of n-heptane. Since most vehicles in urban tunnels are cars or buses, the fire power was set to 5, 10, and 20MW in turn. The shaft is of the size 2m×2m×5m. The two ends of the tunnel and the upper end of the shaft were configured as “open”, indicating that the tunnel and shaft are connected to the external environment. The ambient temperature was set to 20℃, the tunnel material was defined as “concrete”, and the operation time was set to 600s.

Prior to numerical simulation, it is necessary to analyze grid independence. The smaller the grids, the longer the calculation time. This section mainly discusses the smoke motion features and smoke ventilation effects in shaft tunnel under different ambient pressures. Taking the smallest fire source power of 5MW for example, the characteristic length of the fire source was calculated at two ambient pressures: 60 and 101kPa. Then, the grid size must fall between 0.1m and 0.6m. To rationalize the grid size, five grid sizes were simulated, including 0.167m, 0.2m, 0.25m, 0.33m, and 0.5m. Then, the vertical temperature changes were observed at different grid sizes. As shown in Figure 2, under both ambient pressures, the temperature range narrowed with the growing size of grids. The difference of temperature range between the two ambient pressures was very small, when the grid size was smaller than 0.2m. Therefore, the grid size was set to 0.2m in our numerical simulation. 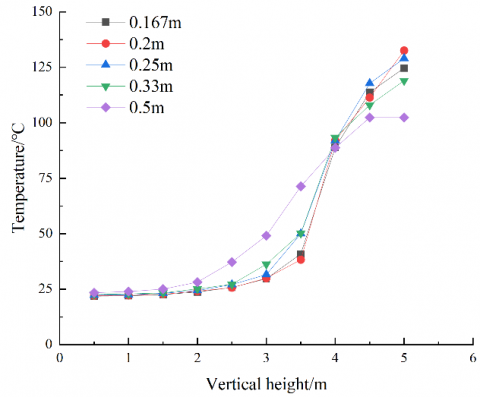 (a) Ambient pressure of 101kPa 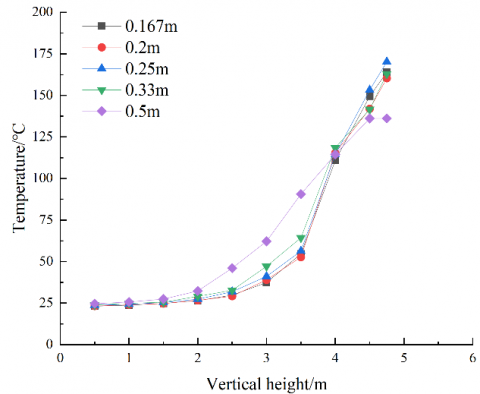 (b) Ambient pressure of 60kPa 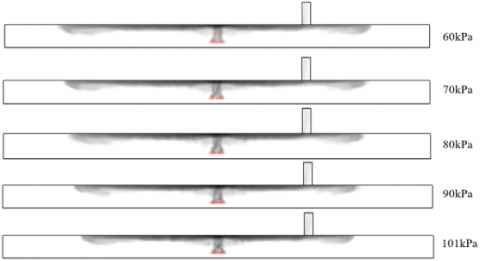 Figure 3 shows the diffusion of fire smoke in the tunnel within the first 75s. It can be observed that, at different ambient pressures, the smoke spread through the tunnel shaft, and further diffused to the downstream. Within the same period, the lower the ambient pressure, the further the smoke diffused. Thus, the smoke diffuses faster in a low-pressure environment, than in a high-pressure environment.

In the area near the fire source, the smoke layer was relatively thin. With the longitudinal diffusion of the smoke, the smoke layer became thick in the area far from the fire source, a clear sign of smoke settlement. This may be explained as follows: During the longitudinal diffusion of smoke, the hot smoke continuous to exchange heat with the roof and side walls, and entrain the fresh air in the surroundings, causing the temperature to drop. The ensuing reduction of temperature difference, and weakening of thermal buoyancy results in settlement.

Table 2 shows the time of arrival of smoke at the left and right openings of the tunnel under different ambient pressures, and the backflow distance of the smoke to the upstream within 75s. The data in the table were plotted as shown in Figure 4. 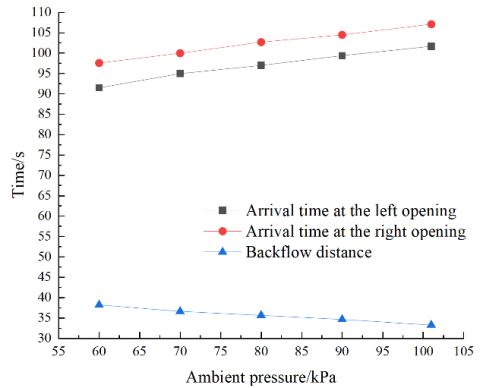 It can also be found from Figure 4 that, with the growth of ambient temperature, the backflow distance of fire smoke in the tunnel gradually reduced. Under the same heat release rate of the fire source, the backflow distance of the smoke at the ambient pressure of 60kPa was 5m longer than that of the smoke at the normal pressure. Thus, the smoke diffuses faster in a low-pressure environment than in a normal pressure environment.

Under the action of thermal buoyancy, the smoke gradually propagates to the roof in the case of tunnel fire. Once it hits the roof, the smoke start spreading longitudinally. Thus, the variation of roof temperature can reflect the smoke diffusion, to a certain extent. Figure 5 shows the longitudinal smoke temperature distributions at different ambient pressures and fire source sizes. 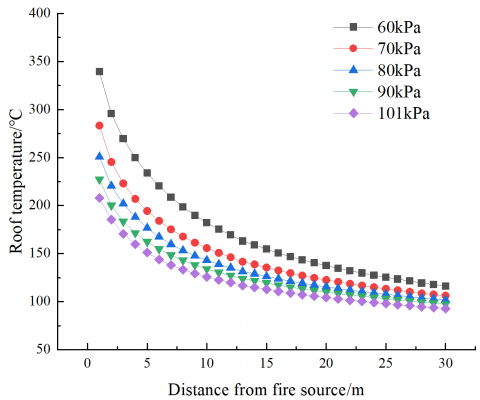 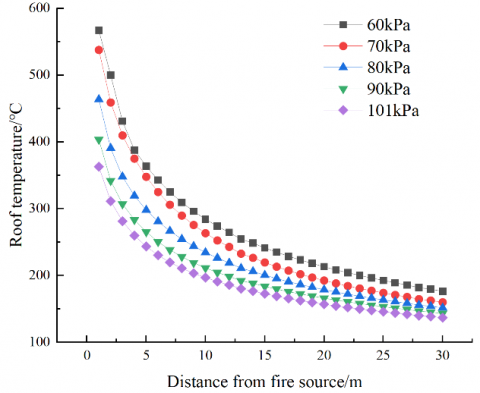 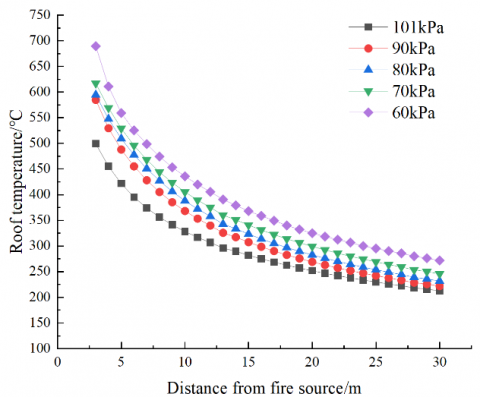 As shown in Figure 6, there is a linear relationship between ambient pressure and peak temperature. The relationship can be fitted by least squares (LS) method: $y=4.0552 x+271.88$. 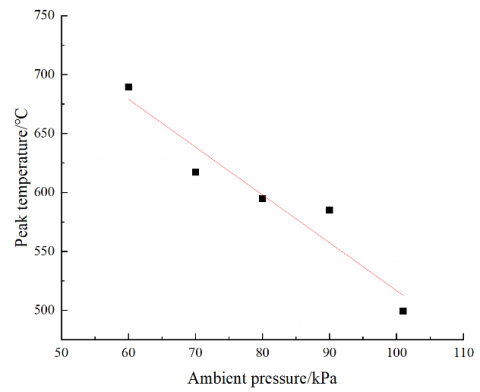 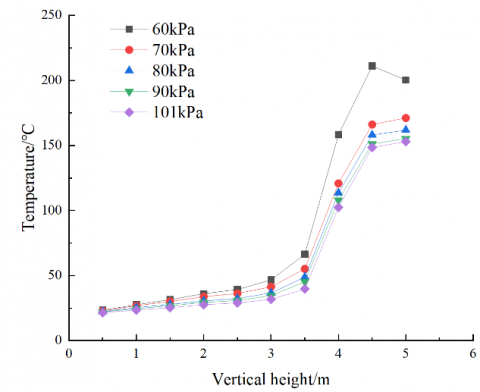 (a) Vertical temperature at 15m upstream the fire source 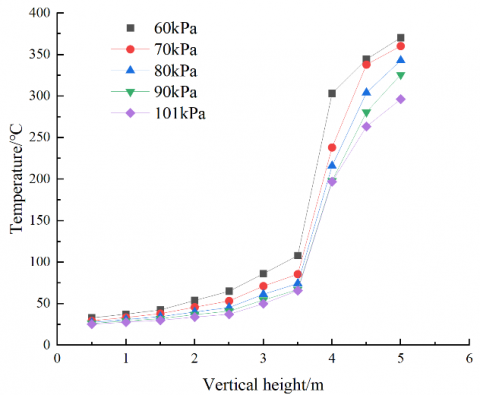 (b) Vertical temperature right below the shaft 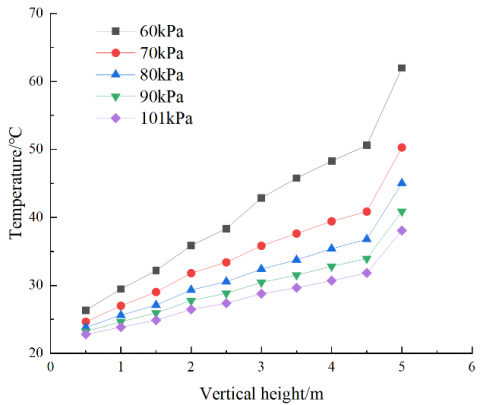 Figure 7(b) reports the vertical temperature distribution right below the shaft. It can be seen that the temperature was below 70℃ at any ambient pressure, far lower than the temperature at any other position in the tunnel. The main reason is that, once the fire smoke reaches below the shaft, a huge amount of smoke is sucked into the shaft and discharged to the outside, under the stack effect. The overall temperature is therefore reduced.

As shown in Figure 7(c), the vertical temperature in the downstream of the shaft was generally lower than that in the upstream of the fire source. This is partly attributable to the stack effect of the shaft. Another reason for the falling temperature is that the surrounding air is continuously entrained by the hot diffusing smoke, which exchanges heat with the side walls and roof of the tunnel. 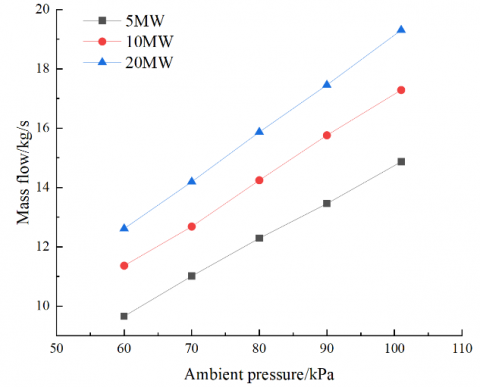 Figure 8. Mass flows of the gas discharged by the shaft at different fire source powers and ambient pressures

Under the same fire scale, the mass flow rate at a low pressure was 40% lower than that under normal pressure. The relatively small smoke mass flow is probably the result of the fact that the air density varies with ambient pressure. In a low-pressure environment, the air is relatively thin, the entraining speed is slow, and the smoke volume entraining the air is low. 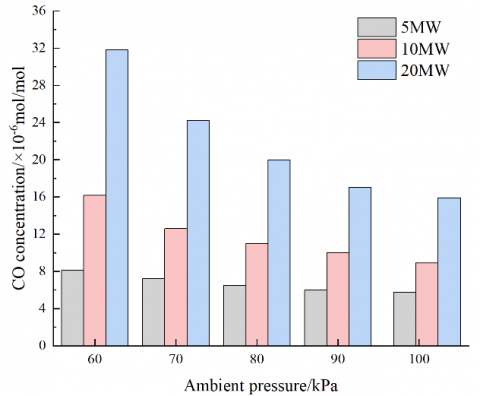 Figure 9. CO concentrations in the shaft at different ambient pressures

(1) When the fire source power remains the same, the tunnel fire smoke propagates faster and faster, with the falling ambient pressure. In the low-pressure environment, the smoke spreads quickly, which leaves a short time for evacuation. This brings a huge challenge to fire prevention and control.

(2) When the fire scale remains the same, the longitudinal temperature curves of tunnel fire have basically the same features, at different ambient pressures. With the increase of ambient pressure, the longitudinal smoke temperature on the roof of the shaft tunnel gradually declines. The declining rate is positively correlated with the proximity to the fire source. Compared with that in small power fire, the roof temperature difference between low pressure and normal pressure is large in large power fire.

[14] Gao, Z.H. (2016). Studies on characteristics of confined fire plumes and mechanism of natural smoke exhaust by shaft in tunnel fires. University of Science and Technology of China.