The construction method of a pneumatic caisson foundation consists in the following:  fabricating in advance at ground level reinforced concrete caissons with a working chamber in the lower part; removing underground water by pumping into the working chamber compressed air that countervails the pressure of water; carrying out extraction and immersion of caissons under a constantly dry condition; and installing the structure at a prescribed position.

A pneumatic caisson foundation is a structure having an excellent load bearing performance against horizontal and vertical loads, which derives from embedding highly rigid caisson bodies into the ground and making the caissons tightly constrained by the ground under the bottoms and by the side faces of the caissons. Thus, this foundation offers a tenacious structural resistance against sliding or overturning that can be caused by a seismic force. Consequently, this construction method is applied to a variety of underground structures, such as foundations of bridges, foundations of road and railway viaducts, foundations of buildings, and vertical shafts in shield tunnels, but there are few applications to port and harbor related structures. This is presumed to be largely because the design method for a pneumatic caisson foundation, assumed to be applied to the port and harbor sector, is yet to be established.

In recent years, wharves with larger depth have been required in Japan to respond to larger sized container ships and increased port calls of cruising vessels. In addition, construction of earthquake resistant port structures has also become important in association with the concern over the possible outbreak of a large-scale earthquake. This leads one to think that in the port and harbor sector, demand for open-type wharves with a pneumatic caisson foundation will increase because of the potential applicability to wharves requiring stronger earthquake resistivity or greater berth water depth. Establishment of the design method is therefore urged.

The concept of the seismic coefficient was proposed by Sano in 1916 [3], with the basic concept as follows: when acceleration α acts on a body with mass m, inertial force mα will work in the opposite direction of the acceleration. Here, inertial force shall be expressed as F and the weight of the body as W, then the following equation shall apply:

Furthermore, if α/g is expressed instead as k, the equation becomes:

The wharf is, as shown in Figure 1, a rigid-frame structure being configured by a steel pipe pile foundation and a superstructure made of steel reinforced concrete. In the earthquake-resistant design of a wharf, rigid-frame structures are analysed using a frame model, and safety margins of the structural components are figured out by statically applying the inertial force of the superstructure calculated from the design seismic coefficients. The seismic coefficient is calculated by the following process:

(i) Using a one-dimensional earthquake response analysis that models the subsoil of the central part of the wharf structure, the response acceleration time history at the position 1/β below the virtual ground surface is obtained. The virtual ground surface is meant to be a gradient face equivalent to a half elevation between the frontal water depth and the actual slope. In addition, β is a parameter called a characteristic value of a pile that appears in a deflection curve of a beam on the elastic foundation and is obtained from

Here, the reason for setting the position where the response acceleration time history is evaluated at 1/β below the virtual ground surface is in order to regard 1/β as the fixed point of the pile according to the deflection theory of the beam on elastic foundation, and to take into consideration the pile-ground interaction in the range from the seabed to the fixed point.

(iii) Apart from the above, if the frame analysis enables the relation between the load and the displacement when a minor load is acted on a wharf to be found, it will allow establishment of spring constants as a wharf, and Equation (4) will yield a natural period.

W: Empty weight on one pile line and surcharge at earthquake (kN) 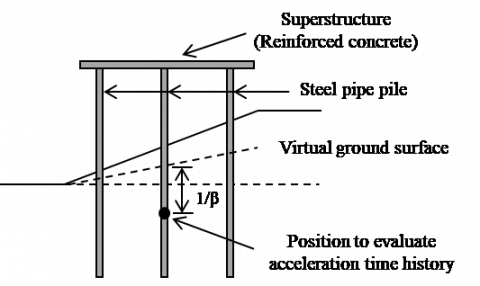 Three cases of wharves with pneumatic caisson foundations were studied in this research. Figures 2 to 4 illustrate wharf structures and their numerical modelling. The lateral area of the model is set to 100 m away from the centre of the wharf so as to avoid the effect of reflection wave from the lateral boundary on the wharf. Liquefaction effect is considered for the reclaimed soil layer of Case A only, with the remaining layers being assumed as free from liquefaction. Table 1 shows dimensions such as caisson foundation pitch and caisson foundation diameter of the respective wharves.

Soil parameters were set according to Morita et al. [15]. 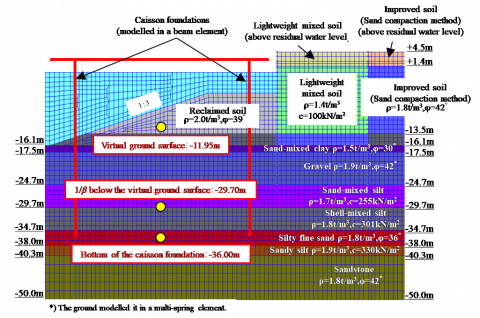 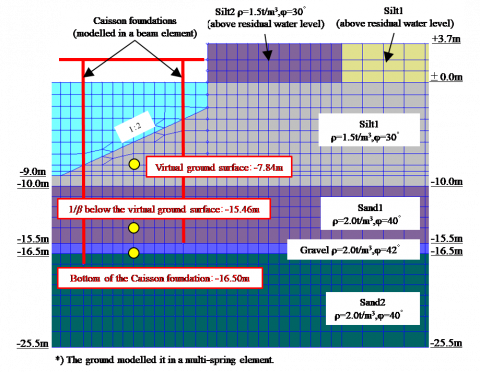 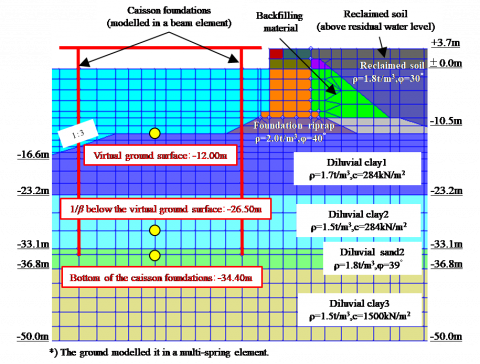 The input earthquake ground motions were set by using the design earthquake ground motion to be applied to Tokyo Port (Maximum acceleration: 182 Gal, predominant frequency: 0.86 Hz), which were made public on the homepage [16] of National Institute for Land and Infrastructure Management of the Ministry of Land, Infrastructure, Transport and Tourism. Since these waveforms had two peaks in the vicinity of 0.86 Hz and 2.0 Hz, the second peak was cut, and predominant frequencies varied to 0.2 Hz, 1.0 Hz and 2.0 Hz were used.

Besides, amplitude adjustments were conducted to make all the maximum accelerations equal to 200 Gal. Acceleration time history and acceleration Fourier spectra of respective waveforms are shown in Figure 5. 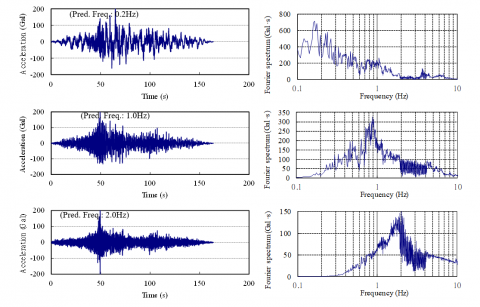 Figure 8 shows acceleration response spectra obtained through the two-dimensional analysis in the central part of the wharf. Here, red circles in these figures represent the maximum value of response acceleration of superstructure obtained through the two-dimensional analysis. Four values of damping constants, i.e. 5%, 10%, 15% and 20% were utilized in calculating the acceleration response spectra. This is because of having taken into account the possible necessity to set larger damping constants than those employed for ordinary structures since seismic behaviour in the central part of the wharf can be affected significantly by slopes and caisson foundations. The spots focused in red circles in the figures have shown a tendency that according as  the evaluation positions of the acceleration response spectra become shallower in the order of pile bottom, 1/β below the virtual ground surface and virtual ground surface, the peak spectra tend to move toward the longer frequency side. 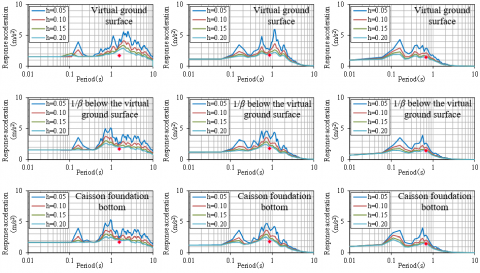 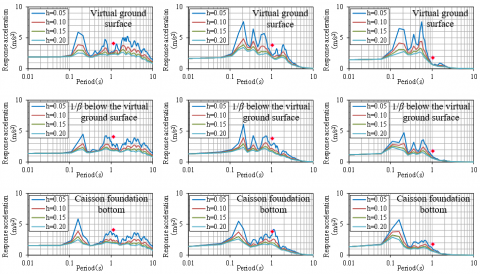 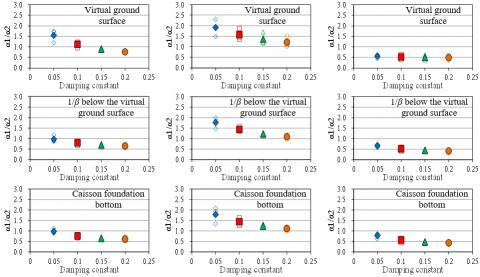 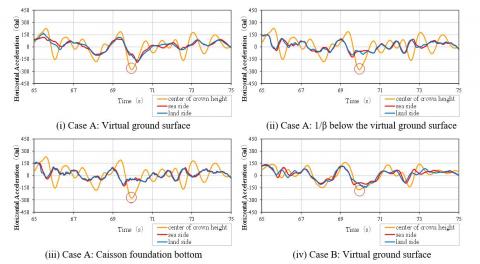 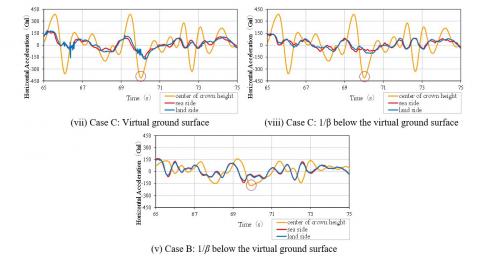 Figure 10. Time history of horizontal acceleration at the central part of the crown, at the sea side piles and at the land side piles

The construction time of Case B is so old that if the concepts of current port facility standards are applied, resulting structural dimensions will highly likely have deviations from those shown in Figure 2. On the basis of the foregoing results, the vibration centre of a pneumatic caisson foundation is at the bottom of caisson foundation, and hence the damping constant of a 5% level is considered to be enough as the damping of a structure.

In order to have a grasp of the seismic behaviour of an open-type wharf with a pneumatic caisson foundation, we conducted the two-dimensional non-linear finite element analysis by varying the frequency characteristics of the input earthquake ground motions; likewise we varied tentatively the positions to evaluate acceleration response spectra at the three levels of (1) virtual ground surface, (2) 1/β below the virtual ground surface and (3) the bottom end of the pile; and also varied the damping constants for use to evaluate acceleration response spectra to the four sorts of 5%, 10%, 15% and 20%.

We thereby examined several combinations of the positions for evaluating acceleration response spectra and the damping constants with a view to verifying which combination will give an optimum reproducibility of the maximum response acceleration on the crown of the wharf. Using the result of the examination, we analysed the differences between the wharf with a pneumatic caisson foundation and the wharf on a steel pipe pile foundation which have structural rigidity different from each other. The achievements of this study are summarized as follows:

(1) Focusing on the time around which the maximum response acceleration on the crown of the wharf is generated, we made arrangement of horizontal acceleration time histories evaluated at the central part of the crown, at the sea-side pile position, and at the land-side pile position of the wharf. It has turned out that the smaller the depth, the larger the phase difference between the sea-side and the land-side, with vibrations considerably vulnerable to the properties of the ground. This is presumably attributable to the disparity in the confining pressure which has been generated by the existence of the slope.

We express our deep gratitude for the favour of Dr. Masahiko Oishi of Oriental Shiraishi Co., Ltd. of having provided us with relevant data and valuable opinions during this research.

[1] Ports and Harbours Bureau, Ministry of Land, Infrastructure, Transport and Tourism (MLIT), National Institute for Land and Infrastructure Management, MLIT and Port and Airport Research Institute. (2009). Technical Standards and Commentaries for Port and Harbour Facilities in Japan of 2009. The Overseas Coastal Area Development Institute of Japan.

[10] Oishi, M., Nagao, T., Ouchi, M., Sato, Y., Kiyomiya, O. (2013). A study on the verification method for earthquake performance of an open-type wharf with pneumatic caissons. Journal of JSCE B3 (Ocean Development) of Japan Society of Civil Engineers, 69(2). (in Japanese).