In radiant floor cooling integrated with underfloor ventilation (RFCUV) system, both convective heat transfer and radiant heat transfer play an important role in RFCUV system. In radiant floor cooling system, heat transfer area of floor surface is considerable, so chilled water with high temperature is available for the system. Therefore, various low-grade cooling sources, such as groundwater, cooling tower water, and chilled water from ground heat exchanger, etc. are able to be supplied to radiant cooling system. To avoid radiant floor surface condensation, cooling water temperature should be lower than room air dew point temperature. Thus, underfloor ventilation system is introduced for dehumidification to guarantee occupant thermal comfort. In recent years, the use of RFCUV system in buildings has been increased [1, 2]. Because of above characteristics, there has been a growing interest on RFCUV system.

Currently, seldom researches have been conducted on humane thermal comfort and the effects of disturbance and input on output of RFCUV system, which will be analyzed experimentally in this paper. This study is the basis for operation optimization and control strategy of RFCUV system, which is of necessity and significance.

In this paper, experimental study is conducted for humane thermal comfort analysis and the effects of disturbance variables and manipulated variables on controlled variables. The size of the test room is 4.2 m´3.6 m´2.6 m. The lab sketch (a room equipped with RFCUV system) is presented in Figure 1. Thermal property parameters of radiant floor construction, building envelope, and surfaces are presented in Table 1. Outside the test room, there is a compensate room. All-air system is used to handle air to support the environment of compensate room that the experiments require. The pipe spacing is 100 mm and the pipe diameter is 10 mm. Total pipe length is 142 m. Water flow rate is 0.024 kg/s in pipes. Chilled water is provided by air source heat pump and then distributed by manifold to every water loop. In the experiment, temperature of inlet water, outlet water, outdoor air, indoor air, building envelope interior surfaces and water flow rate are measured. Testing instruments and its parameters are presented in Table 2. 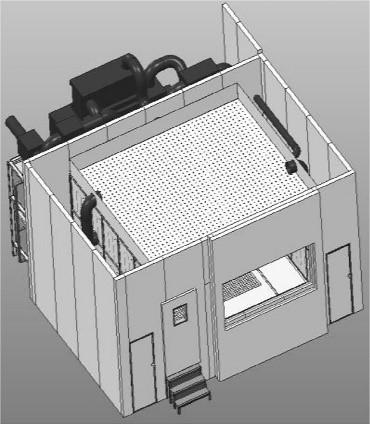 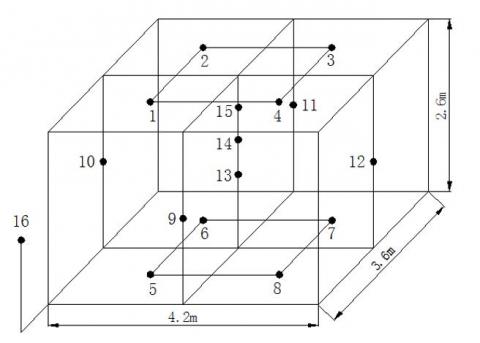 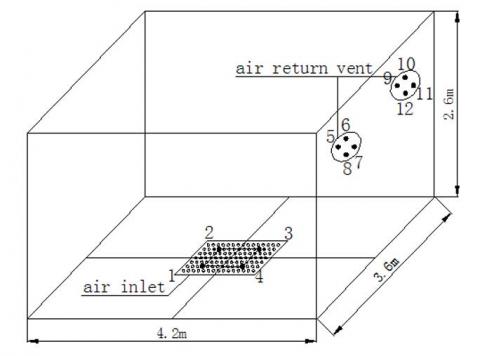 3.1 Analysis of PMV and PPD

According to IS07730, Predicted Mean Vote (PMV) and Predicted Percent Dissatisfied (PPD) are two indexes for thermal comfort evaluation. The two indexes are proposed by Fanger who gathered 1396 American and Denmark examines’ reflection on cold and hot feeling. Because cold and heat are subjective feelings, PMV value can only represent the feelings of most people under the same conditions. Therefore, PPD index is used to express the dissatisfaction percentage, and the relationship between them is given with the method of probability and statistics. When PMV=0, PPD=5%. In other words, in the most comfortable state, 5% of people are still dissatisfied.

The basic basis of PMV-PPD method is the heat balance equation of human body below:

The calculated results are shown in Figure 4. OT, PMV and PPD decrease in the first two hours and then become stable. After two hours, both PMV and PPD value are in ISO7730 recommended value range. 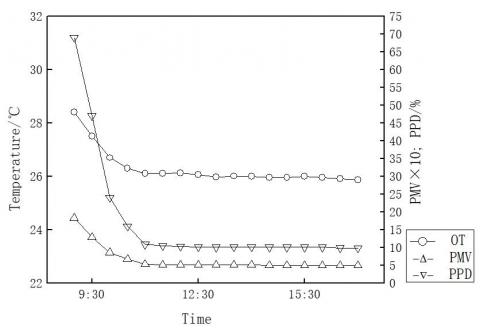 The operative temperature (OT) takes into account the comprehensive action of the average radiation temperature and indoor air, and can be calculated by the following formula: 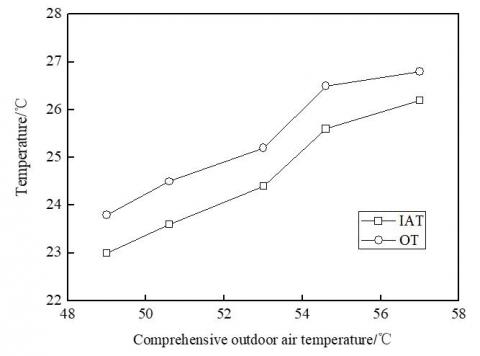 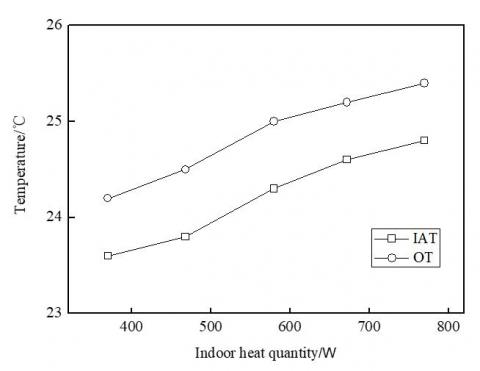 Figure 6. Variations of IAT and OT with indoor heat quantity 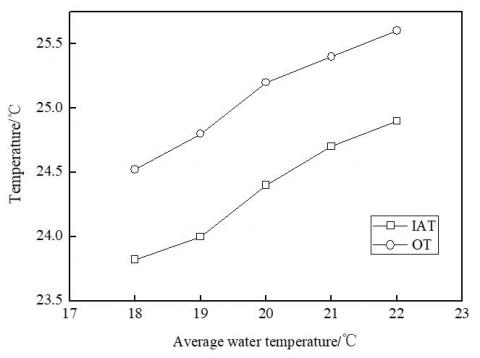 Figure 7. Variations of IAT and OT with average water temperature 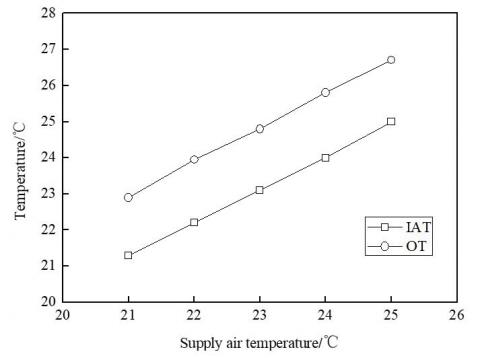 Figure 8. Variations of IAT and OT with supply air temperature

Take the stable state of radiation heat transfer: 12-38 hours. The average radiation temperature at each time is as follows (Table 3):

Table 3. Change of MRT with time

The cooling capacity of the system is also composed of two parts: radiant heat transfer (Qr) from the floor to the surrounding surface and human body and air convection heat transfer (Qc) caused by displacement ventilation.

where, hr is the radiant heat transfer coefficient, W/(m2∙k).

The convective heat transfer can be calculated by the following formula:

where, hc is the Convective heat transfer coefficient, W/(m2∙k),

The total heat transfer resistance is:

Dr. Olesen pointed out that for people sitting and standing, the heat transfer coefficient between the floor and the room is generally about 1.23Btu/ft2/hr/◦F (7W/m2 ℃), Where 0.97BTU/ft2/HR/F (5.5W/m2 ℃) is radiation heat transfer; Considering the comfort limit of the maximum operating temperature of 79F (26.1℃) for the sedentary personnel, the maximum cooling capacity of the floor radiation system is 16btu/HR/ft2 (50W/ m2) [13].

According to the above calculation method, select the stable time and calculate the heat transfer coefficient and heat transfer, as shown in the Table 4 below.

The research on the operation mode of air conditioning system is basically considered from two aspects: to produce a comfortable indoor environment and meet the requirements of energy conservation and consumption reduction.

The air system is basically controlled by starting and stopping the fan, and the start and stop of the air system are adjusted according to the changes of indoor air dew point temperature and floor temperature.

In terms of equipment, due to the introduction of action temperature, the design and selection capacity of the unit is reduced. At the same time, the heat storage of the enclosure and the selection of intermittent operation mode also greatly reduce the size and capacity of the refrigeration device. Since the water system bears most of the indoor load, the air system can be designed and selected with the minimum air volume, and the energy consumption of air transmission will be greatly reduced.

In this paper, an experimental study on operating characteristic of RFCUV system has been conducted. Based on the experimental results analysis, the following conclusions are obtained.

(1) OT, PMV and PPD decrease in the first two hours and then become stable in ISO7730 recommended value range.

(4) In this case, IAT and OT increase approximately linearly with the increasing of supply air temperature.

The authors gratefully acknowledge the support provided by the Talent International Exchange and Training Program 2019 and scientific research fund of Nanjing Institute of Technology under grant no. CKJA201803.