It has been researched at Laboratorioum Terpadu Faculty of Science and Mathematics. The purpose of this study is determining to distinguish in characteristic between sweet orange and sour orange, it makes sure wavelength and absorbance using UV-Vis Spectrophotometer. Furthermore, it is also determining classification between sweet orange and sour orange by predicting between actual data and predictive data. The method used is K-Nearest Neighbor algorithm using MATLAB 2015. Sweet orange and sour orange are researched for their characteristic to be analyzed whether they have significant differences in wavelength and absorbance. The KNN algorithm is used to see its ability in classification to predict sweet orange and sour orange data from actual data. Through this study, it is found that resulting characteristic of sweet oranges and acid oranges has a different, it can be seen based on forms wavelength and absorbance. Sweet oranges and acid oranges have they own characteristic. On the classification, prediction data results showing that 23 correct data from 40 actual data obtained a percentage of 67.5 % by using K-Nearest Neighbor. The finding of this research may serve as reference. The finding of this study may serve as reference for other researchers to be developed further.

Agriculture sector is the mainstay sector in national economic development. Its assignment included contributing to providing foreign exchange through exports, provision of food and industrial raw materials, and providing employment.

Originally invented for estimating vitamin content in US military rations, spectrophotometer later became one of the most widely used measuring instruments of all time in various fields of experimental science. As Nobel laureate chemist Bruce Merrifield vowed for Spectrophotometer of being “the most important instrument ever developed toward the advancement of bioscience”. The instrument is commonly used in chemical education, biochemistry, chemical physics and material science [2, 3].

For two decades, researchers and practitioners have been using UV/Vis spectrophotometers to estimate from absorbances at several wavelength. The accuracy and robustness require a local calibration. Taking into account the local specifications of the water matrices, samples are collected, measured with the special device and concentration are measured with laboratory analysis [4, 5].

Since the classical KNN algorithm is completely based on individual instance proximities, it heavily suffers from high computation cost. In addition, since the algorithm decision-making strategy is relying on the individual instance proximities rather than stronger class representations, the algorithm’s classification accuracy is also not adequate for modern data big analysis that requires rapid and accurate classification results [6].

Orange (Citrus sp) is a plant from Asian. China is believed to be the place where oranges first time grew in both the tropics and sub-tropics. Once upon a time it was around one hundred years ago, oranges have been grown in Indonesia. Indonesia is tropics where it is variety of oranges may be found a whole Indonesian island. Even there are several oranges have been favoriting in both region and national [7].

Orange is one of the horticultural commodities that serves as nutrition, a source of income, and a source of foreign exchange. The contribution of citrus agro-industry in increasing income will give the development of the oranges [7]. 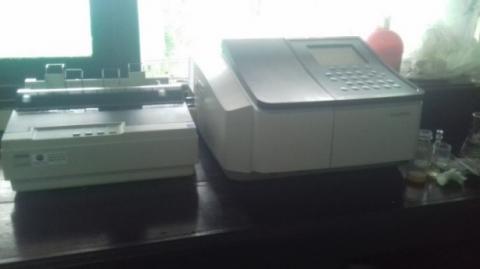 Sample place usually can be used for put down the cuvette. All liquid objects will be filled in cuvette and then the cuvette is put down into sample place of UV-Vis Spectrophotometer.

Monochromator is a device used to produce a beam of radiation with one wavelength. Monochromator usually consist of slit, lens, mirror, and prism.

There are two types of detector, photon detector and heat detector.

Electrical signal which received by detector, it will be recorded as spectrum

Algorithm the K-Nearest Neighbor (KNN) is a method to classify about object based on training data which its nearest distance by the object. KNN included supervised learning algorithm which its result of the new query instance is classified based on the majority from the KNN category. The class that appears the most it will be the classification class. The purpose of this algorithm is to classify the new objects based on attributes and training data [13, 14]. 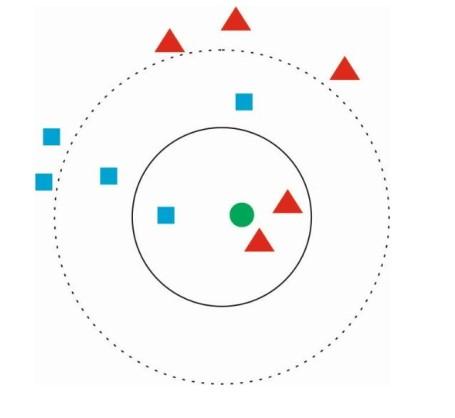 The figure above contains two class classifications illustrated as the “blue square” class dan the “red triangle” class. And then put in a value test as “green circle”. The KNN method shows the result that “green circle” is more towards “red triangle”. At a certain range obtained by the nearest neighbor that is “red triangle” of two pieces and “blue square” there is only one piece. The nearest neighbour will be calculated based on the Euclidean distance in the following equation.

There is an example of applying the KNN algorithm. Two variables are acid resistance and strength, it finds out classification for determination between good quality or bad quality on tissue. The following are four training data.

As a case, for example a factory has produced a new system that has passed laboratory testing, which each of the sample is 3 as acid resistance and 7 as strength. To predict classification the new system and then it will be calculated using K-Nearest Neighbour algorithm.

As for the steps to count the KNN as follows.

(2) Calculate distance between training data and testing data. Training data will be calculated proximity has coordinates (3 and 7).

(4) Collecting category Y from the nearest neighbour row. On the second row does not including to category Y due to the data exceed k-nearest = 3.

MATLAB (Matrix Laboratory) is a program for analysis and numerical computation, it is an advanced mathematical programming language that is designed with the rationale and uses the properties and forms of the matrix [15]. 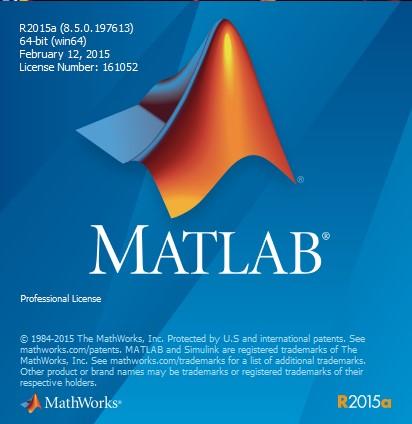 The research will be held At Laboratorioum Penelitian Terpadu Fakultas Matematika dan Ilmu Pengetahuan Alam. It will be going for two months start from August until September 2019.

The data used in this research is obtained through the result of wavelength and absorbance data. They are obtained through UV-Vis Spectrophotometer based on sweet oranges and acid oranges which they are ten pieces each. It is determination the difference characteristics and classification in sweet oranges and acid oranges especially lumajang oranges.

In data processing for classification, the process of grouping data to determine the variable to be used, performing data representation into numerical form and doing data sharing into training data and testing data

In this research it will determine to distinguish of characteristic between sweet orange and acid orange based on wavelength and absorbance. Furthermore for classification, it predicts two variables are actual data and prediction data based on sweet orange and acid orange. These oranges were bought at Traditional Market in Kintamani, Bali. The type of oranges used is Lumajang orange.

Some researchers have been doing to classify of data. And then, in this research will be used K-Nearest Neighbour method. Graphical user interface design can be seen on Figure 2. 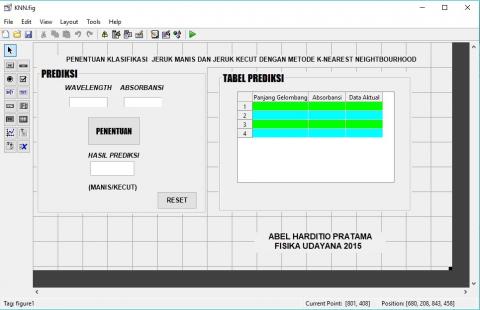 The result of determination wavelength and absorbance can be seen on Figure 6.

While on the Figure 8 it appears that absorbance does not increase with increasing wavelength and reaching absorbance value to wavelength at point 2 is 272.00 nm. 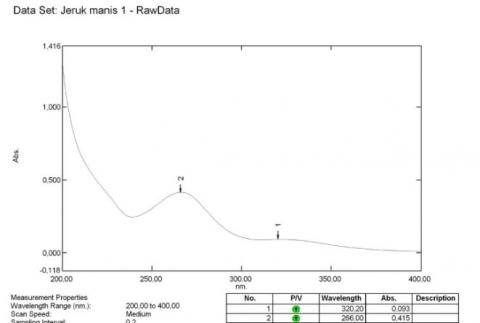 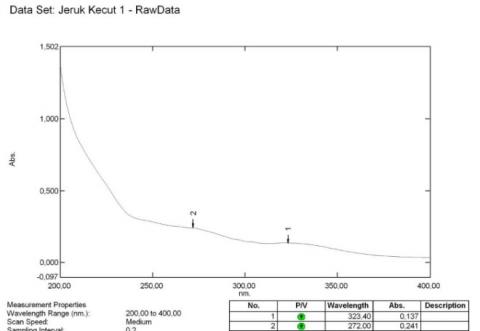 4.2 Analysis of differences in characteristics of oranges

On the classification, it will determine to predict between sweet oranges and acid oranges using K-Nearest Neighbour algorithm method based on wavelength value and absorbance value. Software used for predicting taste of oranges is MATLAB 2015, and the Graphical User Interface has been designed the following in section 3.7.

The Table 6 shows the prediction results of sweet oranges with the KNN method.

The following tables shows the prediction results of sweet oranges with the KNN method.

Two tables above show the result of predicting by using the KNN method.

There are 40 data on classification of sweet orange and acid orange. Based on the table above, the result of prediction data with the correct amount are 27 data. The result of the percentage of classification by the K-Nearest Neighbor method by 67.5 %.

The researching has proved that there are different characteristics between sweet oranges and acid oranges based on forms wavelength and absorbance by using UV-Vis Spectrophotometer. For characteristic of sweet oranges, it has hill waves starting from jeruk manis 1 untill jeruk manis 10. Meanwhile, characteristic of acid oranges has not hill waves starting from jeruk kecut 1 untill jeruk kecut 10. On the classification of sweet oranges and acid oranges, it is 23 correct data from 40 data obtained a percentage of 67.5 %. This study can be conducted further for determining characteristics on other fruits using UV-Vis Spectrophotometer. K-Nearest Neighbor is recommended using for processing data on classification.