In this paper, an attempt has been made to enhance the dynamic behaviour of Automatic Generation Control (AGC) of two areas two units using both Thyristor Controlled Series Compensator (TCSC) placed in the tie-line and Superconducting Magnetic Energy Storage (SMES) units are considered in both areas. For more realistic study, the effects of Governor Dead Band (GDB) and Generation Rate Constraints (GRCs) are taken into account for both areas. However, to conduct the system to better dynamic responses, we have implemented a PI-PD cascade controller. After that, a well-known and powerful optimisation algorithm named Firefly Algorithm (FA) is employed by evaluating the Integral of the Squared Error (ISE). From the obtained results, the implemented methods prove its efficiency from different view of points such as: minimisation of Overshoot and Undershoot Peaks (PO), (PU) and Settling Time (ST).

At any moment, a power system operating condition should be stable, meeting various operational criteria, and it should also be protected in the presence of any emergency. Power system stability defined as the ability of the system to regain an acceptable state of equilibrium after being subjected to disturbances [1].

Nowadays, power systems have been operated closer to their stability limits due to economic and environmental constraints. Therefore, a stable and secure operation conditions present a very important challenge for the operators. Power system stability is mainly classified into three main categories as follows: rotor angle stability, frequency stability and voltage stability [2].

Frequency stability is defined as the ability of a power system to maintain a steady frequency within an acceptable range following a severe system disturbance resulting in a significant imbalance between generation and load [3].

For this reason, the Automatic Generation Control (AGC) has been introduced whose role is:

• to regulate the frequency to its specified nominal value;

• to maintain the interchange power between control areas at the scheduled values;

• to distribute the required change in generation among units to minimize the operating costs.

To attain these principal objectives, a linear equation called Area Control Error (ACE) has been used, which is associated with two main variables named as frequency deviation and tie-line power exchange. The ACE signal must be sets to zero in the case of any load variation in the system.

The AGC has been introduced with its four main actions (four control loops) as follows:

Its main role is to re-establish a balance between generation and demand at frequency different from its nominal value.

This control also known as a Load Frequency Control (LFC) that allows to correcting the total power deviation.

Typically, the operation of TCL which is the Economic Dispatch (ED), as a complementary to Secondary Control, is bound to the period of Scheduling but has in principle the same impact on the interconnected operation as SCL. The TCL is any automatic or manual change in the working points of generators (mainly by re-scheduling), to restore adequate Secondary Control Reserve (SCR) at the right time.

The Load Scheduling (LS) is the disconnection of loads from the synchronous electric system, usually performed automatically, to control the system frequency in emergency conditions.

The LFC problem in power systems has a long history. In a power system, LFC as an ancillary service acquires an important and fundamental role to maintain the electrical system reliability at an adequate level [4]. The LFC scheme has evolved over the past few decades and is used on interconnected power systems. There has been continuing interest in designing LFC with better performance to maintain the frequency and keep tie-line power flows within prespecified values using various control strategies [4].

In control system design and analysis, certain design specifications are required to reduce the steady state error of the system [5].

The optimum value of controller parameters is obtained by minimizing a specified objective function [7].

Several control strategies have been suggested to address the load frequency control problem such as: classical, fractional, cascade. Furthermore, we can regulate the frequency and control the power flow in the tie line side by the incorporation of HVDC link, UPFC, IPFC, etc.

Shankar et al. [9] have focused on the AGC of deregulated environment for two areas power system with AC/DC links and UPFC unit. Then, they have optimised the PID regulator via Fruit Fly Algorithm.

Khamari et al. [10] have proposed a new Search Group Algorithm (SGA) based on PID regulator in two areas multi units power system. Then, they have compared their obtained results with other known optimisation algorithm which is FA.

Ullah et al. [16] have made A Comprehensive Overview about an Automatic Generation Control Strategies in Conventional and Modern Power Systems.

To determine the parameters of regulators some algorithms are applied.

Abd-Elazim and Ali [12] have made a comparison between Classical Control approaches such as: P, and PI for six AGC system using TLBO, DE, GA, CBPSO, FA, KHA, SA, BA, SFS, and HSFS-LUS.

Singh et al. [17] have explored the design of PID with Filter for two areas employing Jaya Algorithm (JA). They have made also a comparison between JA with some heuristic algorithms such as: PSO, DE, NMS, EHO, and TLBO.

A hybrid FA and Pattern Search optimized PI/PID controllers for the AGC of multi-area power system has been presented [18].

Yousfi et al. [19] have presented a synthesis of swarm algorithms known as SSA, GOA, WOA, and GWO to determine the parameters of PIDF and TIDF. All responses are converged to the same results.

In view of the above, a Firefly Algorithm (FA) optimized PI-PD cascade controller is proposed for Load Frequency Control (LFC) of two-area power system with the consideration of Governor Dead Band (GDB)and Generation Rate Constraint (GRC). Further, TCSC is employed in series with the tie-line in coordination with SMES to improve the dynamic performance of the power system. Finally, Dynamical system responses are compared with and without the presence of TCSC and with the presence of TCSC and SMES. The different responses are revealed the effectiveness of SMES unit and TCSC. The remainder of this paper is organized as follows:

(1) To model TCSC and SMES units for AGC studies and to test the dynamic performance improvement; (2) To design a robust cascade PI-PD controller and compare the results with and without TCSC and SMES in two areas with consideration of GDB and GRC; (3) To optimize the above mentioned controller using FA algorithm; (4) To discuss the results and conclude with a conclusion.

Figure 2. Inside view of the first area

FACTS is static equipment used for the AC transmission of electrical energy. It is meant to enhance controllability and increase power transfer capability [20]. Figure 3 presents the different types of FACTS.

In this study, we are interested by TCSC unit.

TCSC is connected in series with the tie line. Considering ∆f1(s) as the control signal to TCSC units, the transfer function of ∆Kc(s) may be shown in Eq. (1):

where, KTCSC and TTCSC are the gain and tie constant of the TCSC controller respectively. Figure 4 presents the TCSC unit [21]. 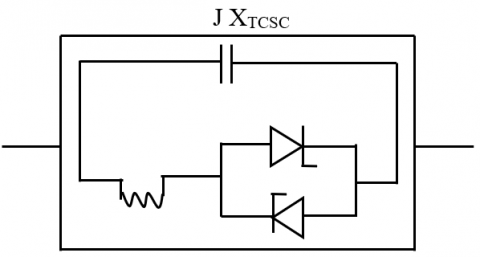 SMES is an energy storage technology that store energy in the form of de electricity that is the source of a de magnetic field. The superconducting coil can be charged to a set point (which is less than the full charge) from the utility grid during normal operation of the grid [21-23].

A schematic diagram of SMES is shown in Figure 5. 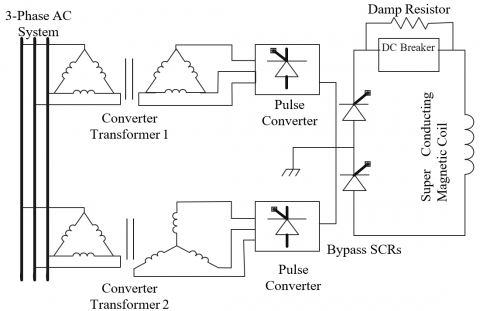 The regulator used in this study is a PI-PD cascade regulator. It is one of controller used to improve the better performance to the system.

The error inputs to the controllers are given by:

The main settings of the PI-PD controller have to be tuned using optimization algorithms by minimizing dynamical criteria. In our study, the optimization problem can be formulated as follows:

where, KP,i, KI,i, and KD,i are PI-PD controller gains of ith area. In this study, the parameter bounds limits are fixed between 0 and 10.

Firefly is a swarm meta-heuristic algorithm and nature-inspired by the flashing behavior of fireflies. Figure 7 presents the flowchart of FA. 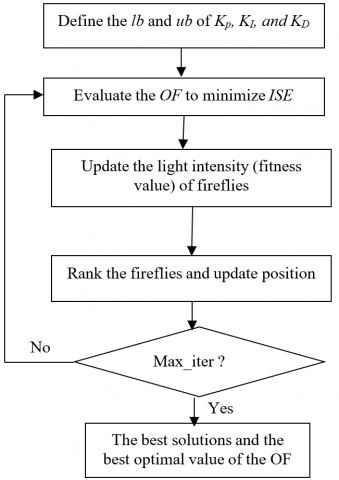 In order to check the efficiency of the both TCSC and SMES units, simulations were carried out on two-area two-unit reheat thermal-thermal systems as shown in Figure 1. The inside view of area one is presented in Figure 2. The suggested control scheme is considered in both areas. In all the study, we have considered 1% load variation in area 1. Then, the FA has been executed to obtain the optimal controllers settings by evaluating the ISE criterion. In this study, we have simulated three different cases as follows:

Case 1: in this first scenario, we have just considered the presence of the control scheme (PI-PD cascade controller).

Case 2: in the second scenario, the presences of TCSC unit in parallel with AC tie line and the control scheme.

Case 3: in the third scenario, we have considered the presence of all units such as TCSC, SMES and control scheme.

After running the optimisation procedure, the optimal obtained controllers’ parameters are tabulated in Table 1. The nominal system parameters are taken from [21] and offered in the Appendix. Table 2 presents the ISE based criterion in all three cases.

Table 2. Comparison of ISE criterion of Case 1, Case 2 and Case 3

From Table 2, we remarked that the ISE of the third case has been decreased by 62.39 % and 77.41% comparatively to second and first cases respectively.

Figures 8-10 (a and b) present respectively the dynamical responses of ACEi, ∆fi and ∆Pmi with the consideration of GDB and GRC in all three cases. Figure 11 demonstrates the ∆Ptie12 in all cases.

It is clearly observed from Figures 8-10 that the better dynamic performance is obtained with the suggested third case compared to the second and first cases in terms of (S.T), (P.O), and (P.U).

The Settling Time (S.T), Peak Overshoot (P.O), and Peak Undershoot (P.U) of Figure 8a for all the cases are tabulated in Table 3. 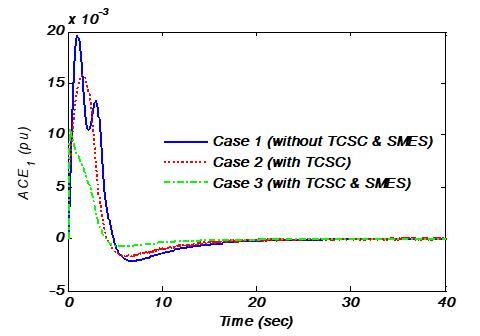 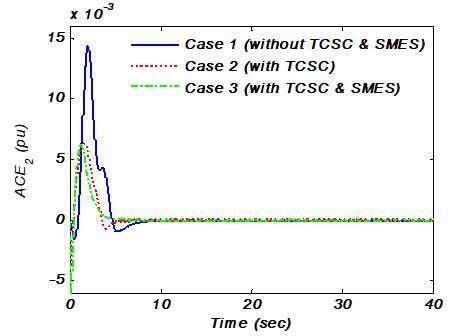 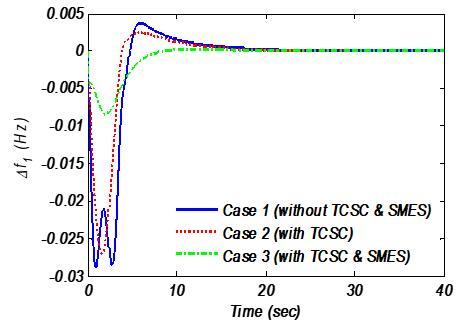 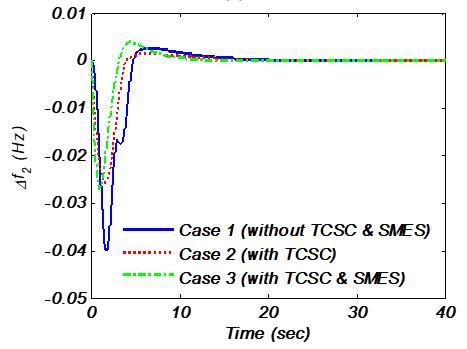 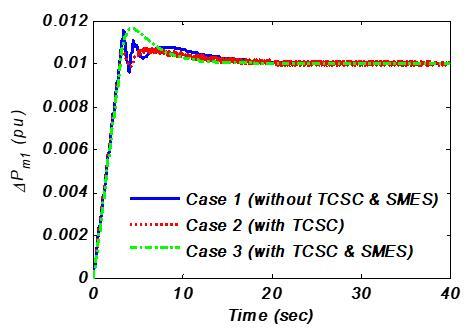 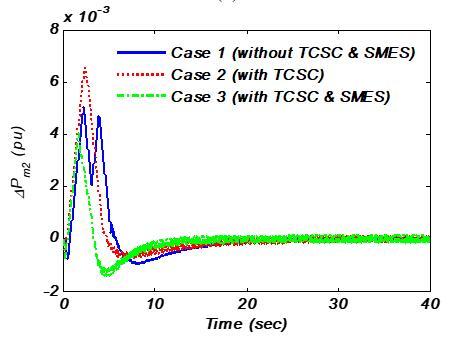 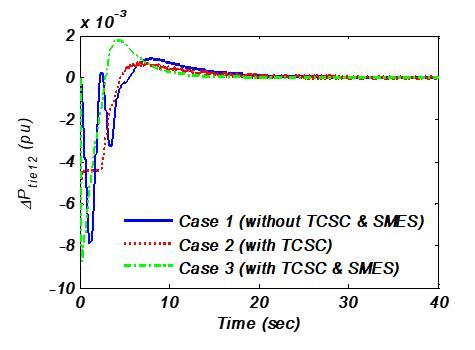 Figure 11. Dynamical response of ∆Ptie12 for 1% load change in area one

For example, the S.T of the third case has been decreased by 58%, 64% compared to the second and first cases respectively.

In this article, a FA optimised PI-PD cascade controller has been proposed for the AGC problem of two-area two-unit power systems with the consideration of TCSC and SMES units. The effects of some non-linear constraints such as GRC and GDB have been taken into account for more realistic study. Furthermore, three simulation scenarios have been considered as follows: scenario one: only the PI-PD cascade controller is considered, in the second scenario: we have added the TCSC unit in parallel with the control scheme, and finally, in the third scenario we have considered the presence of SMES unit in addition the previous scenario. From the obtained results, it is observed that significant improvements of dynamic responses are obtained with coordinated application of TCSC and SMES units from several views of point.

On the other hand, the following points can be recommended to complete this research:

(1) Implement and test the proposed system on a real power system;

(2) Analyse the AGC problem in a deregulated environment;

(3) Develop and design other control strategies that meet the AGC requirements and modern power system needs;

(4) Introduce other non-linear effects in the AGC model.

Nominal parameters of the system investigated are: