HIV/AIDS is a dreaded disease which has over the year claimed the life of so many people both female and male, adult and children in the whole continents or the globe. The mathematical model on the control of HIV/AID control was formulated using, vaccine, condom, therapeutic dose and public health campaign. The Maple software was applied to obtain the Eigen values which validate the asymptotical unstable nature of the disease equilibrium position. The paper suggests with the appropriate use of condom for both female and male can help to reduce both the prevalence and incidence of the HIV/AIDs pandemic.

The human immunodeficiency virus since discovery has caused a lot of havoc to the global community by weakening the person’s immune system as it destroys the most important cells that fight diseases and infection in human body.

No effective cure exists right now against this disease, HIV, but with proper Medicare, HIV can be controlled. People are likely to get HIV more even because of many factors which includes; their sex partners, their risk behaviours, and where they live.

The number of new HIV infection has declined globally by 21% since the estimated peak of the epidemic in 1997, 2.1 million People were newly infected with HIV worldwide in 2017 (NACA). In some part of the world, particularly within sub Sahara Africa, between 15% to 28% of the population are living with HIV. According to Naresh et al. [1], the study of HIV/AIDS control dynamics has been of great interest to both applied mathematicians and biologists due to its universal threat to human existence. Mathematical model has been used in the study of HIV/AIDS control and treatment.

Yusuf and Benyah [2] presented a deterministic mode, for controlling the spread of HIV/AIDS. Gumel et al. [3] proposed a mathematical model for the dynamic of an infectious disease, a three dimensional model which assumed a non - linear incidence rate was quantitatively analysed to determine the stability of the equilibrium. Naresh et al. [1] also proposed non linear ordinary differential equation model to study the effect of vaccination on the spread of HIV/AID in a homogenously mixing population. Wu et al. [4] studied the impact of imperfect vaccine and their analysis showed that in a population of self interested individuals, there exists an overshooting of vaccine uptake level as the effectiveness of vaccination increases. The basic reproduction number of their model was calculated. Isaac et al. [5] presented a mathematical model of HIV/AIDS at the Techiman municipality of Ghana and recommended that HIV/AIDS education should be intensified.

Omale et al. [6] presented a well structured mathematical model for the control of HIV/AIDS using condom, vaccine, therapeutic doses with public health campaign in a heterogeneous population using $\left(S V H E I I_{2} A_{2} A A_{T}\right)$ model formulation. The model is well posed and invariant within a well feasible deterministic region.

Motivated by the above work, in this paper we consider the stability analysis of the model by looking at the local and global stability of the disease free equilibrium, and the basic reproduction number of the model. Some numerical simulations are also given.

The development of our model is based on the following assumptions, in Omale et al. [6] as,

In the force of infection $\beta_{1}>\beta_{2}>\beta_{3}$. This show that $\beta_{1}$ contribute much on the transmission of the infection due to the fact that they are not receiving treatment, so they are not protected, $\beta_{2}$ contribute much less on the transmission of the infection due to their HIV status, they have acquired HIV/AIDS but receiving treatment so their viral load will be significantly reduced, unless if they desist from taking their daily pills. $\beta_{3}$ is expected to contribute least to the infection, since they just acquired the full virus and are aware of the AIDS status and they are receiving the daily therapy. There is natural death rate ($\mu$) in the whole compartments, but there is an HIV/AIDS induced death rate in the (A) and ($A_{2}$) classes. (A) and ($A_{2}$) are the same if proportion of (A) class stop receiving treatment, Omale et al. [6].

Table 1. State variable of the HIV/AIDS with control strategies

The total population at any time t is given by

The population is homogeneously mixed and each susceptible individual has equal chance of acquiring HIV infection when the individual come in contact with an infectious individual [7].

The variables and parameters to be used in the model are as Table 1 and Table 2.

The effective reproduction number R0 of the systemis obtained by using the next generation operator method to assess the stabilities of the DFE and the endemic equilibrium (EE) point and the computation of the Basic Reproduction Number is very essential. According to Dickman et al., the basic reproduction number is defined as the effective number of secondary infection caused by a typical infected individual during his/her entire period of infectiousness. This definition is given for the models that represent spread of infection in a population. It is obtained by taking the largest (dominant) Eigen value (Spectral radius) of;

where, Fi is the rate of appearance of new infection in compartment i.

$V_{i}^{-}$  is the transfer of individual out of the compartment i by all other means.

E0 is the disease free equilibrium.

where, G is given as,

Substituting the values of the variables as in equation above, then we have

The basic reproduction number, which is given by the largest equation of the normalized model system (3) with vaccination strategies, condom usage, public health campaign and treatment, is given as in (25) above:

R0 measures the average number of new infections resulted by introducing one infected individual into the population of which are completely susceptible. Anderson (1) [8].

Local stability of disease free equilibrium E0 is obtained by the variational matrix M0 of the normalized model system corresponding to E0 as given below.

We set the systems by considering the normalized systems.

This implies that where $\bar{\eta}_{i}$ are the eigenvalues

This follows that, since non ofl the eigenvalues of the characteristic equation have negative real parts, the disease free equilibrium E0is not locally asymptotically state in the region Ω.

From the equilibrium of the normalized system (3), we equate the right hand to zero and with the Basic reproduction number R0, where 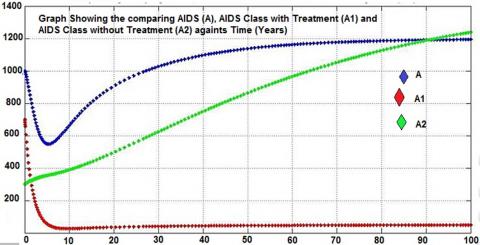 Figure 1. Comparism of aids class, aids class with treatment and without treatment 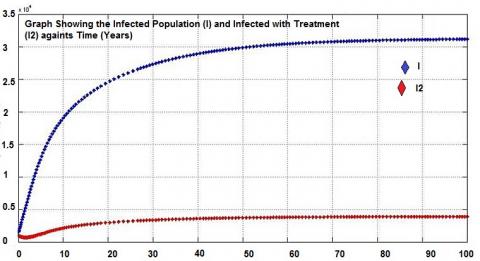 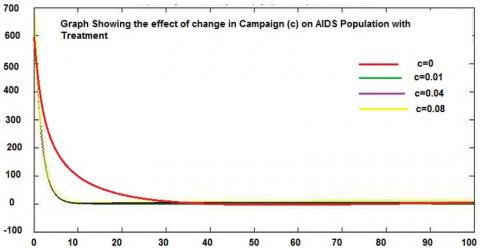 The unique endemic equilibrium $E^{*}$ of the normalized model exists and is locally asymptotically stable if R0>1 and unstable if R0<1.

This show the interaction with various classes for more clear view. After a long period the AIDS with treatment rises above AIDS class without treatment indicating that the treatment has the power to prevent HIV/AIDS death.

The use of HAART reduces the viral load of AID patient who is taking therapy regularly. Therefore use of public health campaign on the use of therapy will reduce the effect of HIV/AIDS death within the population as we vary values of c from c=0.00, c=0.01, c=0.04, c=0.08 the increase in the public health campaign will to reduction in patient with HIV/AIDS with treatment. 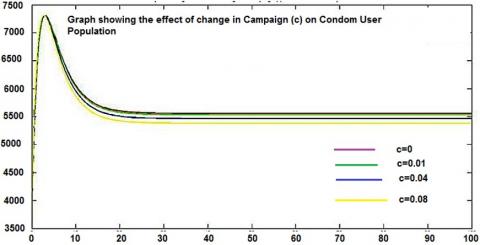 Figure 5. Effect of public health campaign on the use of condom 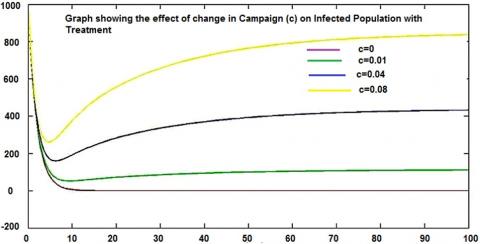 Figure 6. Variation on the change in public health campaign on infected population with treatment

Figure 4 indicate that increase in public health campaign from c=0.2, c=0.4, c=0.6, c=0.8 will lead to a significant decline in the number of people who will adamantly refuse to present themselves for screening and eventually therapy as you can see above public health campaign will force people out of this class and attendant consequences.

Figure 5 shows the variation in public health campaign as c=0.0, c=0.1, c=0.4, c=0.8 indicating that increasing the public health education in the population on the need for anyone who may endure in legal or illicit sex to use condom will definitely reduce the number of people that will remain in this class for a long time after a period of 20 years using the parameter values

As seen above, if the public health campaign increase it will lead to significant increase in the number of those that will present themselves for therapy with the variation in public health education as c=0.02. 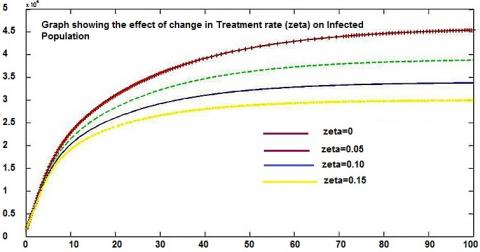 Figure 7. Variation on the change in public health campaign on infected population with treatment 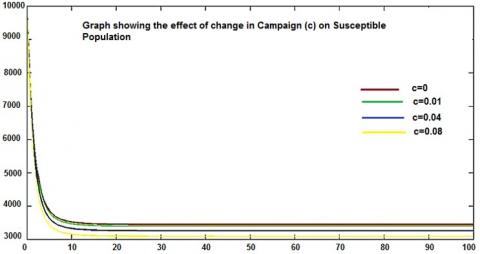 In this paper, HIV/AIDS epidemic model was considered in which a nonlinear incidence rate was introduced. The general dynamic of our model is determined by the study of the basic reproduction number $R_{0}$. Where the $R_{0}<1$, the disease free equilibrium is globally asymptomatically stable and when the $R_{0}>1$, the unique endemic equilibrium is globally asymptomatically stable.

We finally suggest that the appropriate use of condom both by the female and male during sexual intercourse whether heterosexual or homosexual will combat the spread of HIV/AIDS within the population and sexual habits can reduce both the prevalence and incidence of the HIV/AIDS pandemic.

Empower people infected and affected by HIV/AIDS through training, consulting and education to cope with the circumstances.

Develop standards and guidelines that can lead to the institutionalization of the best practices to mitigate the impact of AIDS.