In this paper, a novel method is presented that applies high-resolution aerial images to extract the building using invariant color features and shadows information. The framework of the proposed method has three main steps. Firstly, we extract the shadow zone using invariant color features. Secondly, the building suspect area is obtained using the sun angle and illumination direction according to the relationship between the building and its cast shadow. Finally, the boundary of the building is extracted using the level set method. The results, evaluated on real data, show that this method is feasible and effective in building extraction. It has also shown that the proposed method is easily applicable and well suited for building boundary extraction from high resolution image.

Building as a shelter is an essential place for human, extracting the building from high-resolution aerial images is becoming more and more important as many remote sensing applications, such as automated map making, urban planning and damage detection, etc. Unfortunately, it is tedious and time-consuming for a human expert to manually label buildings in a given aerial image. Meanwhile, automation building extraction is very difficult to develop generic algorithms because of the diverse texture information, complex environment and the occlusion by trees. Shadows exist in most aerial remote sensing images with high resolutions, and its existence is useful to extract the building for high resolution aerial images. Therefore, one is challenging problem to extract the building using shadow information.

In this study, we propose a novel method for extracting the building boudary from high resolution images. Our method firstly extract the shadow zone using the improved invariant color features, then the building suspect region is obtained using the sun angle and illumination direction according to the relationship between the building and its cast shadow. Finally, the boundary of the building is extracted using the edge information. Moreover, the method proposed is test in our experiment using high resolution aerial images. Theoretical analysis and experimental results show building can be extracted effectively by means of the proposed algorithm.

Due to the absence of Infrared information, Red, green and blue bands were combined following the method suggested by Sibiryakov [8]. Color invariants, originally proposed by Gevers et al. in [9] are a set of color models independent of the viewpoint, surface orientation, illumination direction, illumination intensity, and highlights. Shadows are identified through the use of color invariant features [10].We detect the shadow in the aerial images by the following equation:

Where SC is the value of color invariant features, R(i, j), G(i, j) and B(i, j) are the red, green and blue band at the pixel’s point (i, j) in the image. This image is Otsu thresholder and all pixels below the threshold are considered shadow. In order to detect the single building, shadow zone are segmented many connected regions using 8-connected neighborhood method.

The shadow direction $\theta$ location is very important. We can adjust $\theta$ according to its actual angle as

Where d is 17 pixels in our test set. As shown in Fig.1, then we set a candidate region of building as the buffer area, the buffer’s center is the point ( xb, yb ), the buffer zone area is twice than the shadow’s area, the buffer shape is retangle. At last, we segment the building boundary using level set method [12]. 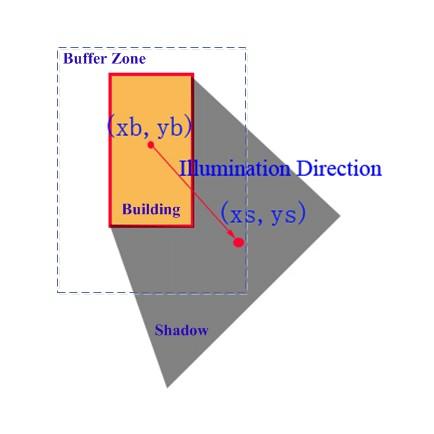 In this experimental part, we tested our building detection method on 10 aerial images. They have same illumination conditions. All test images are in RGB color format with a 0.2 m/pixel resolution. Test images are taken from Yangjiang, Guangdong, where are taken photo in April, 2012. The building detection results can be seen in Figure 2. These results show that our method works fairly well for the test images. 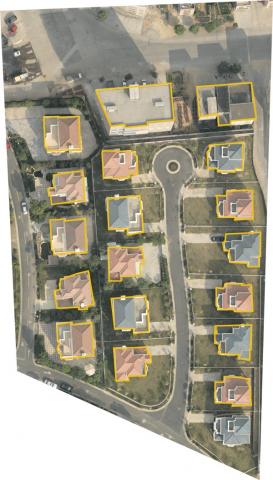 In order to further validate the proposed method, the DP (detection performace) and BF (branching factor)[] was used to evaluate the performance of the proposed method. Many researchers use these definitions to report the efficiency of their methods. These are

Table 1. Evaluation of the detection results in the test image set