The gene expression dataset has the characteristic of small number of samples, large number of genes and many genes related to noise and useless genes, it is necessary to work out effective method to find genes related to disease. The differential co-expression bicluster is helpful to find genes related to cancer and biological process of aging. This paper first puts forward a new dispersed method of multi-valued sample based on the rough set, and then proposed the DCECluster biclustering algorithm. It extended nodes with the strategy of depth priority, and added several pruning steps to mine maximal differential co-expression biclusters effectively. The result of experiment shows DCECluster is more efficient than current algorithms.

In recent years, the microarray has been a new high throughput test technology which can simultaneously test thousands of gene data’s expression level in the meantime. So it has been a useful tool to research the interrelation of genes in post-gene era. However, how to give a reasonable analysis of the large amount of experimental data brought by this technology and how to reveal the biographic knowledge underneath the gene data have been a bottleneck of effectively using the technology.

Cluster Analysis is a common way to research the microarray. By the Cluster Analysis, it can effectively predict the function of unknown gene and protein. The purpose of traditional Cluster Analysis is to divide the gene according to the gene expression level and classify the genes which have the similar expression pattern into one kind by various mathematical models. Based on this, we can find related genes and research on the function of genes. However, the traditional Cluster Analysis deals with the whole sample sets and have some defects: (a) Incapable to reach Cross Clus. From the biological perspectives, one gene can be involved in many bio-processes or bio-functions which mean genes can exist in various cluster results but the traditional Cluster Analysis can’t realize the Cross Cluster. (b) Incapable to reach the partial spatial clustering. Two genes can have the similar expression patterns under some conditions while the traditional cluster analysis can’t reach this kind of clustering under partial conditions. (c) Incapable to find the relationship between clusters [1]. Therefore, bicluster emerges as the times require and it has been a widely used excavation method in microarray technology. 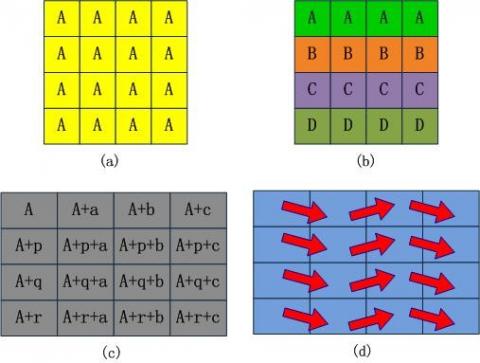 (1) To make up for the defects that the ordinary gene data is dispersed in “0,1”or“0,1,-1”,they put forward a dispersed method of multi-valued data based on rough set.

(2) They put forward a new support level of differential co-expression.

(3) According to the relationship of gene co-expression, it guarantees the effectiveness of working out the largest bi-cluster by adopting the revising policy and turning the gene sample data into weight chart of differential co-expression.

(4) By using the two dataset, this article proves the superiority of bicluster by two experiments.

Constructing the new gene expression dataset $D^{*}$ according to $D_{j}^{S_{i}}\left(g_{t 1}, g_{t 2}\right)$ and sorting for the attribute importance of gene expression dataset according to each set $S_{m}$ of sample properties. This discretized method is more precise compared with the traditions, because traditional method only discretizes data into two values 0 and 1, or three values 0, 1 and -1. This new method can better reflect the real data, which can decrease the noise influence and the useful information loss. Table 2 is an example for discretizing using definition 2.

Definition 3 Bicluster. A bicluster consists of a row set and a column set, row set can be seen as all gene set

Definition 4 Relationship of gene co-expression. The relationship between gene $G_{1}$ and  $G_{2}$ has three conditions:

The number of large scale gene is far more than that of the experimental conditions (samples) in gene expression dataset.

This proposed algorithm adopts the differential weighted graph based on experimental conditions in order to mine the maximum differential bicluster effectively.

Definition 7 Weighted graph on gene differential samples. Suppose that $G=(V, E, W)$ is a weighted undirected graph, and it represents a weighted graph. Where, vertex v(A) represent the experimental conditions in dataset A. It represents that there exists a gene set of differential co-expression between two vertexes if they are connected by edge $e_{i j}$. The weight $w_{i j}$ on each edge denotes the gene set of differential co-expression between vertexes $v_{i}$ and $v_{j}$. In weight, including not only solving difference from dataset A to B, but also from B to A, and can avoid secondary search, promote efficiency. According to article [8], the definition of differential graph from gene dataset A to B as follows: 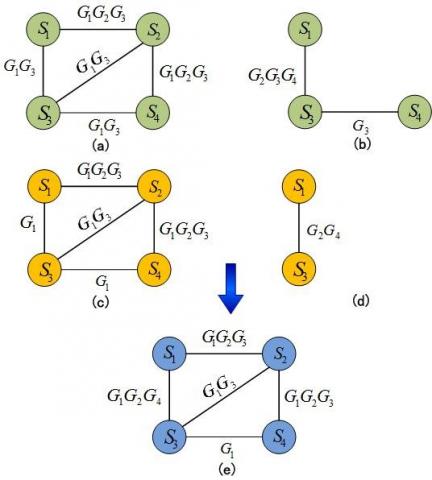 Theorem 1 Pruning strategy 1. If the gene sequence of sample $S_{i}$ is empty in gene sample tree, then, it is unnecessary to generate sub-nodes for $S_{i}$.

Theorem 2 Pruning strategy 2. Suppose $i<j$, and if the gene sequence is exactly the same for sample node A on ith layer and B on jth  in the procedure of generating sample gene tree, then it is unnecessary to generate sub-nodes for A.

Inference 1 If the gene sequence of new nodes between sample node A and B through intersection operation is the same with A, then A can be replaced by C.

4.3 The flow of DCECluster algorithm

Gene sample dataset can be discretized using effective method in algorithm, and generate weighted graph based on gene differential samples, remove the irrigated gene samples with mining, at the same time, use the strategy of depth prior search and pruning to mine the maximum differential co-expression bicluster.

then scan dataset A and B, create the weighed graph DCSWG;

iii) if one node Ci conform to pruning strategy

then cut the node

then add them to P

else delete the node 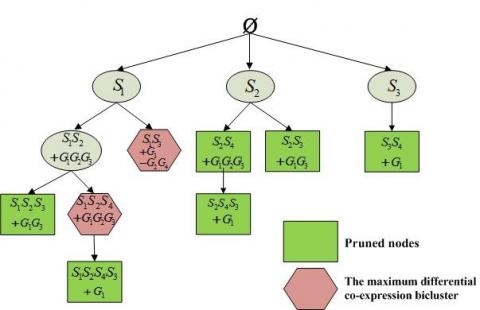 Figure 3. The procedure of DCECluster algorithm

(b) Search and pruning. In this paper, both depth prior search and pruning method are used, and there are $2^{t}$ elements at most on the structure tree of solution space for the collection having t vertexes.  Searching the structure tree of solution space using depth prior method, and using the pruning function to avoid the ineffective search, the time complexity mentioned above is $O\left(t .2^{t}\right)$.

All told, the time complexity of DCECluster algorithm is $O\left(t .2^{t}+g . C_{t}^{2}\right)$. The $2^{t}$ elements on the structure tree of solution space need to compute each gene if the weighted graph on gene differential samples is not generated, namely, the time of complexity is $O\left(g .2^{t}\right)$ to mine the maximum bicluster using non-weighted graph. We can see from above comparison, the superiority of DCECluster algorithm is not obvious even worth than the general algorithm when the number of genes g is very small or close to the number of samples t, but it has strong superiority when g reaches to large scale or mass level.

In order to evaluate the effectiveness of the algorithm, in the first part experiment, we adopt six different dataset from table 3 to mine biclusters using different algorithms, and compare the number of biclusters that they can find respectively. The data in table 3 is from different biological field. In the second part experiment, we adopt the gene expression data AGEMAP [9] to compare the efficiency of different algorithms. AGEMAP records the changes in the level of gene expression of little mice in different age, and concludes 8932 gene expression. At the same time, AGEMAP also concludes 16896 cDNA from sixteen organizations, which has five male and female mice respectively in one month, six month, sixteen month and twenty-four month age. In this paper, we mainly analysis three organizations including hippocampus, heart and sex organ. We can find the genes correlated with age or senescence through the analysis. 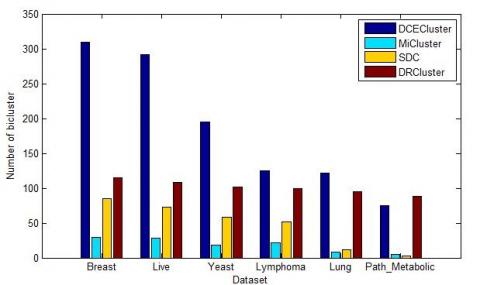 Figure 4 shows that the mined number of biclusters for four algorithms in six dataset. It can be seen from Figure 4, the number of biclusters found by MiCluster algorithm is the least, this result mainly is related with the defined differential support. DCECluster algorithm can mine the most clustering number and the most abundant, because it adopts effective support, differential weighted graph and effective pruning strategy.

5.2 The comparison of algorithm’s running time

To value on the algorithm’s effectiveness, we select different scaled data from AGEMAP gene expression dataset(the scale of gene are 1000, 2000, 3000, 4000, 5000, 6000).We test the four types of bicluster under differential support level.

From the Figure 5, the speed of “DCECluster” and “MiCluster” which adopt differential weight chart is faster than the other two algorithms. Because “SDC” takes no effective measures to avoid the candidate nodes or the expanding of intermediate results, the depletion of internal storage is severe. When the support level is 0.1,the number of genes increase from 1000 to 2000,the running time tends to straight up. But when the number of genes is over 2000,it is incapable to get the exact running time because of long time enforcement of procedure. When the support level reach to 0.3 and 0.5,the effectiveness of SDC has been greatly improved and get the ideal running time at gene of 3000 and 4000. That is to say, for SDC, the efficiency of algorithm has been improved by increasing the differential support level and shortening the running time. DRCluster also adopts a search policy which is of higher efficiency than SDC. But when the gene is over 5000,the procedure also can’t get the exact running time. Although MiCluster can work out a little  data of bicluster, it is of high efficiency and close to the algorithm of DCECluster. With the increase of genes, the running time of DCECluster is gently increased and the DCEcluster’s expanding performance is good which is not only suitable for ordinary scaled data but for working out the large scaled data.

b) The dispersed method and revising policy of gene data need to be optimized.

c) We can establish the social network between people and study on the mechanism of cyberspace and social community. In this way, we can analyze the relationship of genes and find out the pathogeny and biological function of disease by working out the differential co-expression data to make up the gene network. In this way, we can infuse new energy for life science.