Both time and frequency domains are utilized to generate acceleration time series from stochastic models. Extensive reviews of acceleration time series process models in the frequency and times domain have been presented by Kozin [1]; Shinozuka et al. [2] and Chang et al. [3]. A number of papers in the literature have reported ARMA models. ARMA models are discussed in detail by Box and Jenkins [4]. The basic concept of using artificial acceleration in the seismic analysis was proposed by Housner and Jennings [5] and Jack [6], and other researchers have studied the correlation between model parameters [7, 8].

The autoregressive moving average ARMA models at any time step “t” may be represented as follows:

The Eq. (1)'s left side represents the autoregressive, AR, part of the order “p.” Thus, the measured data sequence used is time series [$Z_{k}$]. Meanwhile, the Eq. (1)'s right side as part of order “q” is the moving average, MA. Then, the sequence [$W_{t}$] is a set of identically distributed and independent Gaussian variables.

Referring to the pattern of the partial autocorrelation and autocorrelation functions is a necessary step to clarify information about the ARMA process's order selection (p,q). 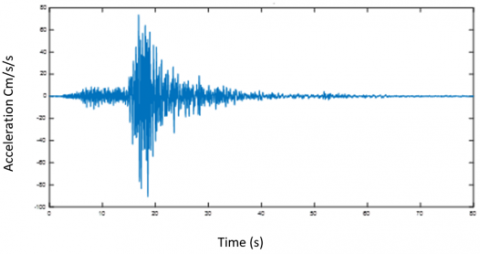 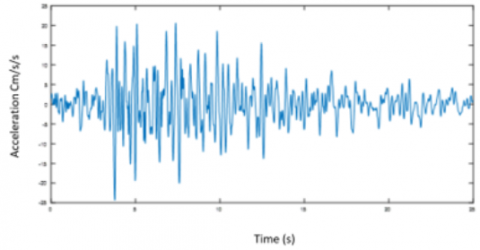 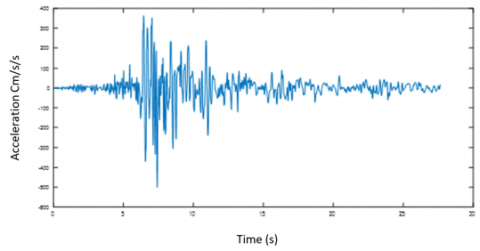 The following five-step algorithm must be performed when installing the ARMA model in an acceleration time series:

Shown in Figure 4, Figure 5, and Figure 6 are the modulating and envelope functions for the three measured acceleration time series.

It must be said that to perform steps 3 and 4 it is necessary to apply STATGRAPHICS [9]. The ARMA parameters and envelope function parameters are shown in Table 1. 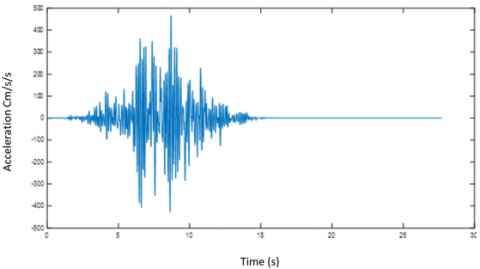 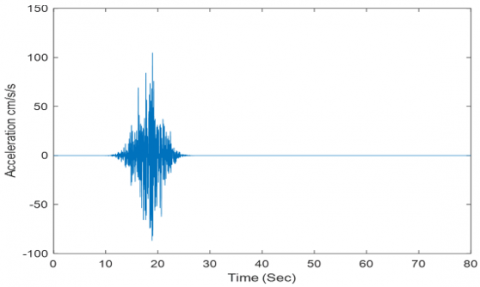 The ARMA models provide an effective means in characterizing the non-stationarity of records which can be used as input in structural analysis. Each acceleration time series is an output time-series event from a representative class of stochastic processes characterized by the ARMA models.

Structural response spectra provide an excellent means to describe a ground acceleration time series. A single degree of freedom system with viscous damping is used to obtain the spectral response. Figure 10. System stiffness can be bilinear or stiffness degrading. Then, it is necessary to apply a stepwise numerical integration of the general equation that considers the linear acceleration at each time step [10]. This strategy is used to obtain the spectral response for a unique acceleration time series. The equation is:

where, U(t) is the relative mass displacement for the ground, c is the damping coefficient, M is the mass, and $\ddot{U}_{g}(t)$ is the acceleration of M relative to the fixed reference axis, and R(U,t) is the restoring force. 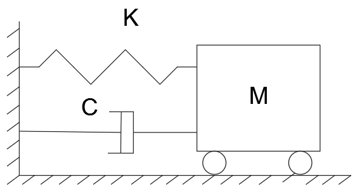 Several measures have been proposed by a number of investigators. These damage measures are expressed as functions of structural response parameters to summarize the effect of acceleration time series on linear and no-linear systems. A comparative of damage measures study was made by Grigoriu [11], the implementation of these arrangements has been carried out by Pappas et al. [12] and Chopra [13].

For design purposes, it is generally essential to know the maximum absolute value of the response subjected to an acceleration time series.

This dependence function, reflecting the relationship between the maximum value and the period or frequency of natural vibration, provides a classical spectrum for systems with the same damping value and periodic range.

If the amount of energy expended by the system to dissipate in the case of full excitation is divided by twice the energy absorbed at the first yield plus one, it is possible to obtain hysteretic energy, defined as the normalized value. The energy dissipated in a structure with the hysteretic load-deformation relationship is given by

where, $E_{S}$ is the elastic strain energy given by:

The normalized hysteretic energy will be then

Multiple ARMA models were successfully used to analyze the three acceleration time series, with empirical data recorded for further processing. For ease of visualization, information on the projected ARMA parameters and envelope functions are summarized in Table 1. Consequently, the following steps were used to build the models. First, a sample of ten artificial acceleration time series was generated for each parameter set of the three natural series, and as illustrated in Figures 7, 8, and 9, even the simple model generally described well the periodicity of events peculiar to the Afroun, Ain Defla,  and Dar Beida acceleration series.

Subsequently, the hysteretic energy demand spectra coupled with the mean displacement ductility were calculated for the three acceleration time series. To establish a confidence interval, the standard deviation was computed for each output event. The results are shown in Figure 11. In addition, the results were obtained using bilinear and stiffness degrading systems.

As a general remark, the spectra ordinates decrease with an increase in the period. The mean response spectra show a stable and smooth curve with changing frequencies. Spectral ordinates for both stiffness degrading systems and bilinear ones are in general similar spectral shapes. 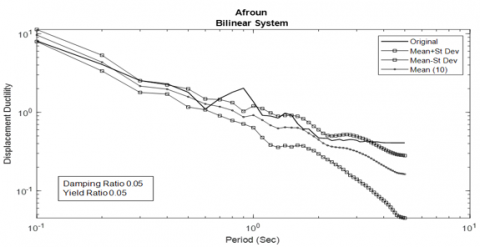 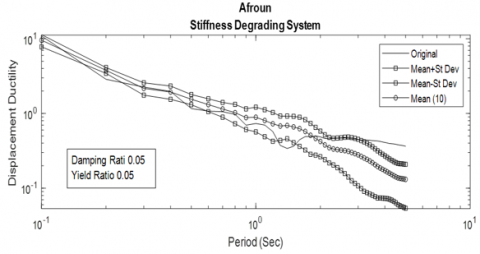 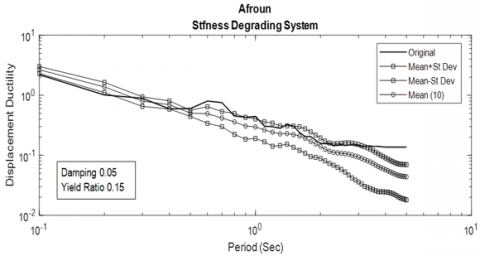 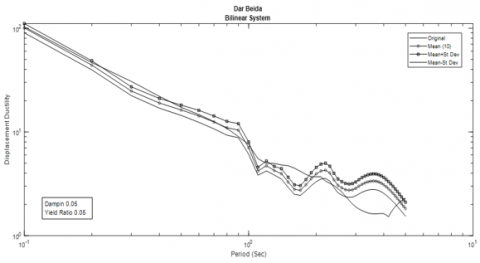 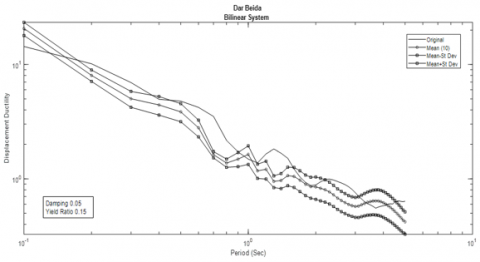 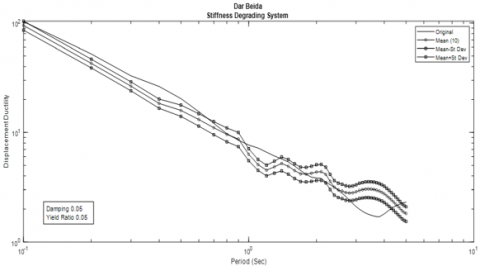 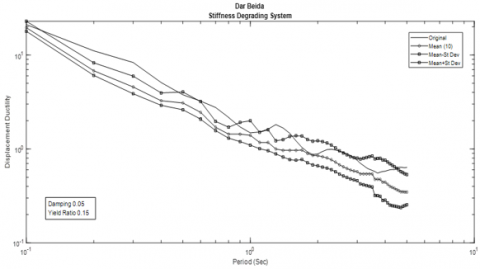 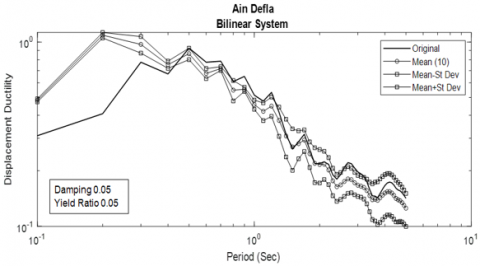 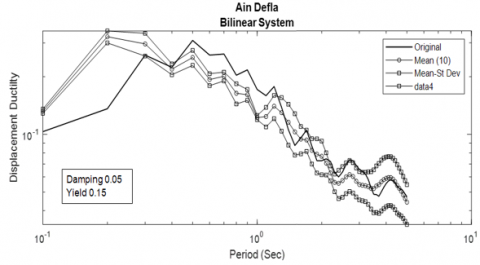 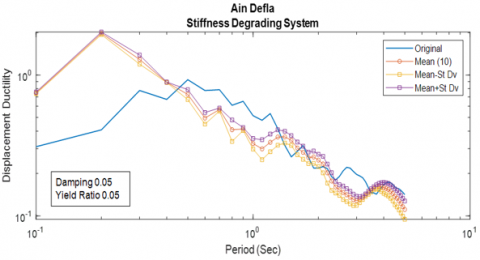 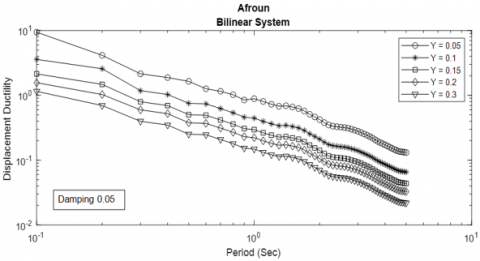 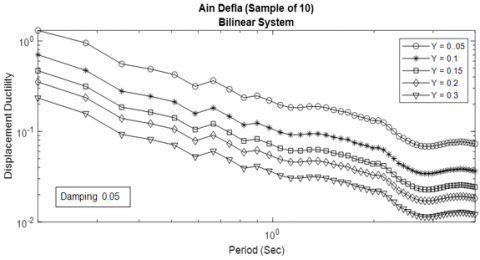 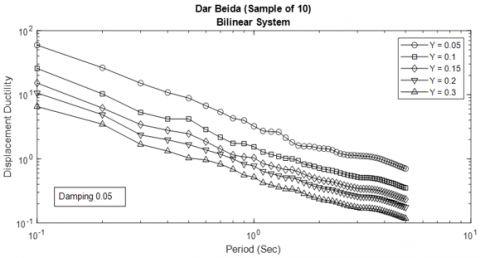 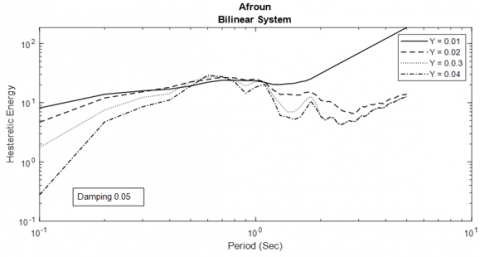 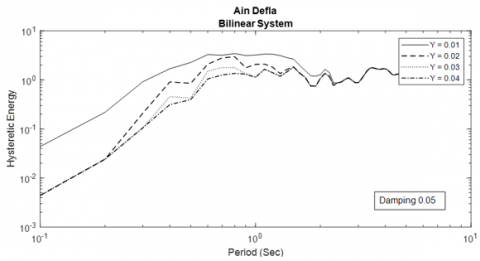 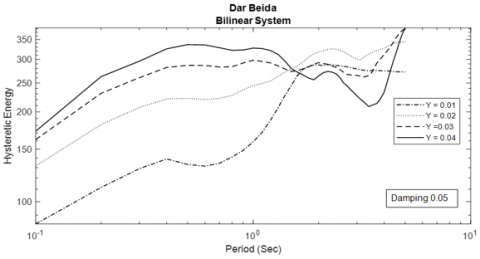 Several useful patterns emerged from this analysis. First of all, the results obtained for the spectral response for the two quantities showed that the logarithm of the average nonlinear response demand spectrum was linearly related to the logarithm of the natural period under certain conditions. Then, based on the empirical relationships for the normalized hysteretic energy demand spectra $E_{H}$ and for the displacement ductility μ, the following relationships can be inferred:

(1) In fact, the application of the time-domain approach using ARMA models provides uncomplicated results for a limited number of parameters, while practical implementation requires imposing restrictions on the number of model parameters.

(4) For a given system period and damping, the response spectra (displacement ductility and Hysteretic energy) decrease when the logarithm of the system period increases.