The collaborative filtering technology finds the neighbor users through the similarity between users, and user neighbors with similar interests according to the calculation of the interest scores and all the users' preferences, so as to recommend similar items to users [5].

When recommending, this method searches for similar objects through global search, and scores according to the user-item scoring matrix to obtain the recommendations. For different objects of the user similarity calculation, the classification methods are different and divided into the following two categories [7].

The Item-based CF algorithm recommends similar items to users by finding similarities among items., which is based on the concept that users have the same preference for certain item.

Although the memory-based collaborative filtering technology performs better, its computational efficiency will decrease when the number of users and items increases, due to its user-item scoring matrix for all users and items. In order to solve this problem, scholars have put forward the model-based collaborative filtering technology, which can improve work efficiency by relying on data mining, linear regression and other methods to establish an offline decision model by matrix learning. However, it takes a high cost and requires regular update. If the update interval is too long, the recommendations will be inaccurate. 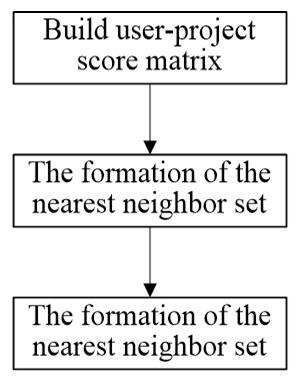 In the table, m and n, respectively, stand for the number of all users and items, and $R_{i j}$ is the evaluation value.

The average weighted strategy is usually used to calculate the predicted score according to Formula (1).

In this equation, Pi and Qi represent the actual score set of system prediction and the users respectively, and the measurement can be done by measuring the difference between these two. The MAE is inversely proportional to the recommended quality.

The sparsity of matrix refers to the fact that the scoring matrix relied upon by collaborative filtering technology is getting sparse due to the users’ failure to score all the items when the scale of users reaches a certain extent [10] and the accuracy of the recommendation results will also be affected. Methods including data filling and data dimension reduction are used to solve this problem. 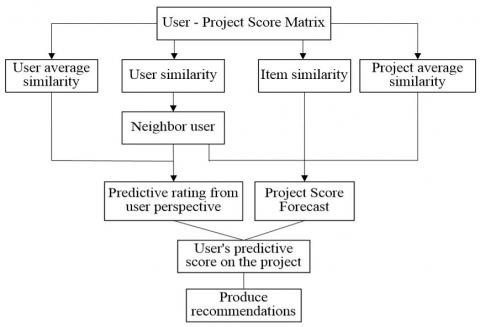 Cold start can be divided into the cold start of users and projects. No relevant historical operation records and score records can be found in new users and new projects, and thus recommendation cannot be provided.

When scale of users and projects expand, it will inevitably lead to the reduction of timeliness. To solve the scalable problem, the method of threshold setting or probability calculation can be used to reduce the search space and improve the operation efficiency.

(1) Flow of Collaborative Filtering (ASUCF) algorithm based on average similarity

In this equation, UAS(i) is the average similarity of user i; $C^{2}|I i|$ is the number of combination of scored projects; $I_{i}$ is the interest distribution of user i.

In this equation, IAS(c) is the user average similarity of project C; $C_c$ is the scored user set of project C.

Different from the traditional method used in predicting scores based solely on the users' situation, the scoring characteristics of both users and projects are considered in the computation of predictive score of ASUCF.

1) $P U_{i}, c$ computation from the perspective of users

2) $P I_{i, C}$ computation from the perspective of projects

With the development of information technology, cloud computing has become the best strategy to solve the big data recommendation problem because of its advantages of large scale, low cost, strong computing power and high reliability. This paper takes Hadoop cloud computing platform as the platform of big data processing, and realizes the parallelization of ASUCF algorithm through the MapReduce parallel computing model on the Hadoop platform [12], thus improving the computing efficiency and scalability.

4.2 Algorithm process design based on MapReduce 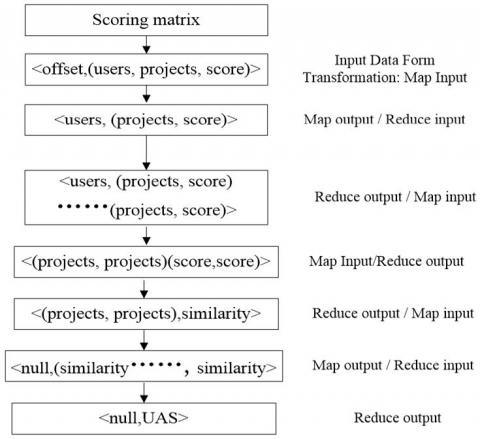 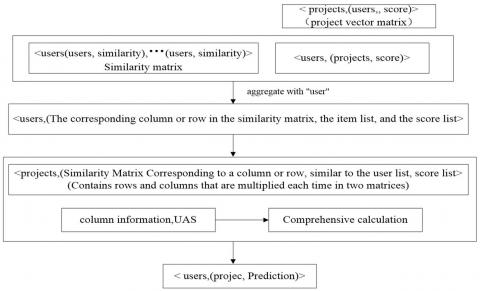 (2) Key to the Realization of Algorithm MapReduce Design

As it can be seen from Figure 6 that when the UAS, IAS, user similarity and project similarity are calculated, the key step is the computation of $P U_{i}, c$ and $P I_{i}, c$. This paper conducts the algorithm MapReduce design from the perspective of users. The project perspective method is the same as the user principle, which will not be explained in details. The specific process is as follows [15]:

matrix can be generated through conversion.

4) Comprehensive computation of $P i, c$ 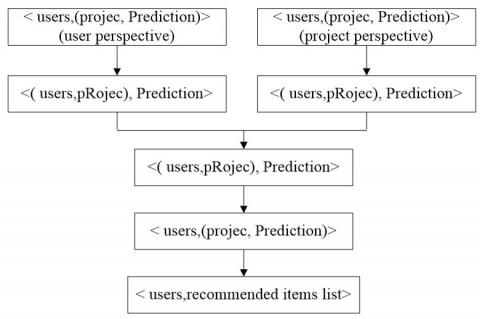 In order to verify the accuracy of collaborative filtering optimization algorithm-ASUCF (MAE), this paper builds a Hadoop cloud computing platform by selecting one master and five slaves with the same configuration and software version and uses Mahout development tools to implement ASUCF algorithm. The specific software installation and platform building process will not be introduced here.

In this paper, the evaluation of users for movies in the commonly used MovieLens in the recommended field is selected as the experimental data set, because it meets the requirements of the ASUCF algorithm computed in this paper when the data is sparser. The data set is true, reliable and resource-rich. Table 3 is three kinds of scales of dataset size provided by MovieLens.

In this experiment, a data set of 100,000 records is taken and the contrastive analysis method is used to conduct two-time accuracy (MAE) experiments on traditional collaborative filtering algorithm and optimization algorithm (ASUCF). Other variables are fixed, the ratio of test set and training set is randomly divided into 4: 1 and 7: 3 respectively, and the number of neighbors is 15.

(1) MAE Experiment Results When the Ratio of Test Set and Training Set is 4:1 and 7:3 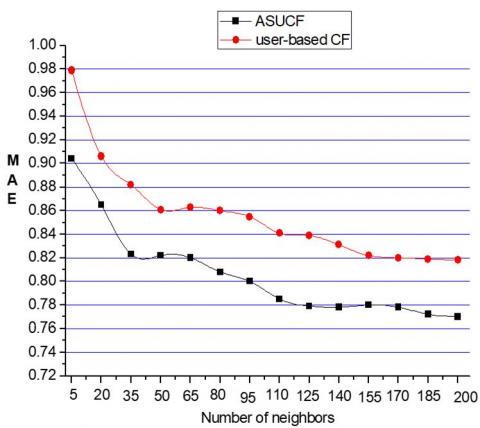 Figure 10. Training sets and test set results when the ratio is 4: 1 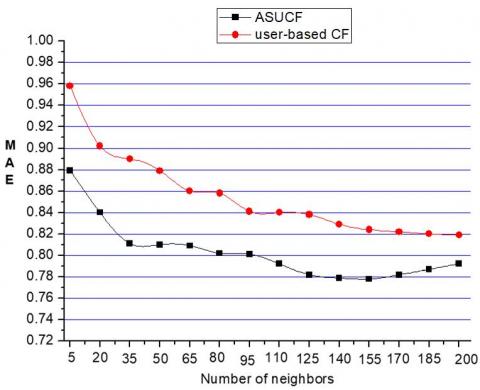 Figure 11. Training sets and test set results when the ratio is 7: 3

Figure 12 shows the MAE experimental results of ASUCF algorithm when the division ratio is different. As it can be seen from the figure, when the number of users is less than 95, the MAE value with division ratio of 7: 3 is lower than that with ratio of 4: 1, which indicates that the result of this division proportion is superior. However, when the number of users is more than 95, the difference between these two is small. Therefore, we can conclude that the prediction accuracy (MAE) of ASUCF algorithm is better when the sparseness is lower. 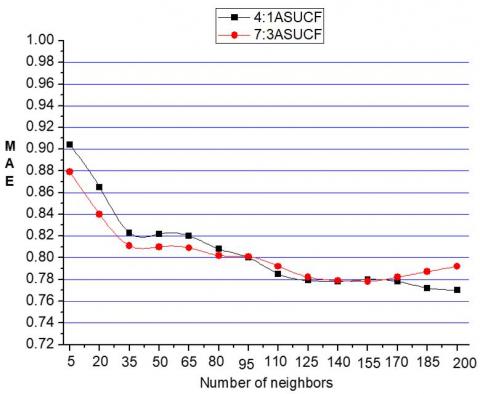 Figure 12. The ASEF algorithm MAE when the ratio is different 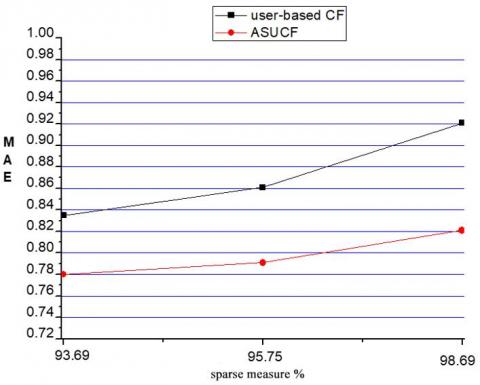 Combined with the above experimental data and comparison diagrams, we can conclude that the collaborative filtering optimization algorithm-ASUCF can effectively solve the problem of sparse data in the traditional algorithm and improve the accuracy of the recommendation results.

This paper takes the optimization of the collaborative filtering recommendation algorithm based on big data processing as the research content and conducts in-depth research to improve the accuracy of recommendation results aiming at the problems in traditional algorithms. The main conclusions are as follows:

(3) By using the Hadoop cloud computing platform, the comparative analysis method is used to conduct the data set experiment of the ASUCF algorithm with different ratio to verify that this algorithm can compensate the sparseness of scoring matrix in traditional algorithms and improve the accuracy of the recommendation results.