Study of Architectural Shading System Based on BIPV

Study of Architectural Shading System Based on BIPV

(Pv) Power combined with Building (Building Integrated Photovoltaic, hereinafter referred to BIPV) is the one of the form in the practical application of Photovoltaic technology, its main combining ways have Photovoltaic roof, curtain wall of pv Building, pv Building sunshade, etc. This paper introduces a design that can be used for engineering photovoltaic an intelligent sun-shading system, which contain intelligent sunshade function and have (pv) power ability.

Shading can effectively weaken heat of sun radiate into indoor and reduce the load of air conditioning; it Can improve lighting evenness and avoid to produce glare; it can reduce light pollution in glass curtain wall and also can reflex and isolated from the noise of world profile outside. Building sun-shading system which is used in the manufacturing technology of modern industrial, its unique form and structure, light and shade variations can add the building more artistic aesthetic feeling in addition to the physical function.

Sun-shading system can be divided into fixed and adjustable form according to the controllability. Adjustable form can be divided into manual adjustable, electric adjustable and intelligent control which can be adjusted. The so-called intelligent sun-shading system, intelligent control system is adjustable, which is accompanied by a variety of sensors, such as smoke sensors, wind speed and direction sensors, photosensitive sensor, the snow and rain sensor etc, it can automatically adjust the shade (leaf)perspective according to the actual circumstances in order to the optimum shading effect.

This paper designs both a shading of photovoltaic system and the intelligent shading and photovoltaic energy function, it is arrived as shown in figure 3-1. It mainly includes the following four parts: it designs supporting structure and designing shade (leaf), electric machine and transmission mechanism, control system, Photovoltaic power system in order to combine with engineering practice and design within the building in 1600 mm wide and 800 mm high outside surface. Photovoltaic blinds components connect and control by the form of array. Every piece of leaf is breadth of 100 mm and length of 800 mm, about 20 mm distance; all parts add up to 16 pieces. 16 blades run by the control a motor and single-chip controls electric machine. 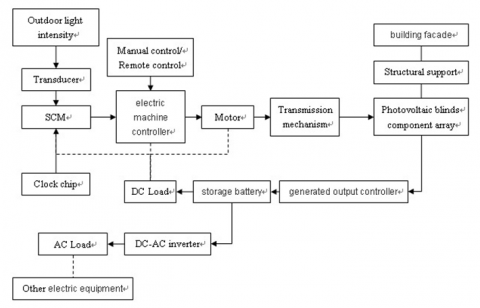 Photovoltaic blinds are not only as the building component of shadow to undertake the mission of sunshade but also bearing and integrating the photovoltaic cells to output power. The blade Angle changes by the control of single-chip microcomputer. At the same time its photovoltaic battery produces electrical energy to charge the battery so that supplying for motor and SCM or other dc power equipment, in addition, power can be applied after DC and AC inverter transform for interflow equipment. It can be incorporated into public grid under Conditions, external of single chip can connect with photosensitive sensor and clock chip; Photosensitive sensor test changing of outdoor light providing the signal of light intensity for single chip, the clock chip produces a time signal to read for single chip microcomputer. Single chip reads the current time single chip and stored time when outdoor light become strong—Motor running schedule compares and inquires, output control signal by the motor controller, motor and transmission mechanism to run blade into appointed angle. When outdoor light becomes weaker, it will drive blade to the horizontal position directly. The positive and negative turning of every electric machine is by their motor controller, the motor controller already are in control of both the output of the single chip microcomputer control signal and by the individual manual, remote control switch.

Photovoltaic sunshade components, as a peripheral part of the building structure, are an interactive touch interface of buildings with the environment, they should be make adjustments based on the outside environment and indoor environment change. In an intelligent control, acquisition of various environment variables and signal processing actually constitute a miniature weather stations. Generally, it need to gain acquisition of the signal including light outside of strong, wind speed and the direction of the wind, the rain and snow, fire signal, the amount of indoor temperature, whether there is a maintenance personnel work outside, emergency button and so on. When the above signal is normal, blade can change to be automatic operation under control program with radial Angle by the time schedule. When the above signal value is over the threshold set, it will drive to the designated position leaves and generally make blade by level. In addition to use the time program to control outside, it still can track the sun by acquisition radial Angle, however, as the sun is regular, the position of the light relative to the blade has uniqueness for a specific position building in a moment of year. Therefore, blade controlled by time program is concise and convenient, good stability, it is the first choice of leaf control.

4.1 The control of output–The design of angle

Blade Angle can be designed according to building in the latitude, the circumstance such as position and use demand. Different engineering can have different design. This paper is based on the building which is located in Beijing, for example (Beijing north latitude is 39 ° latitude, its longitude is 48' east longitude 116°28'), a mounting surface shading is toward the south. Because Beijing is located in the zone with hot summer and cold winter, general summer half a year (April to September)which is shading coefficient SC should be as far as possible big and can be designed close to 100%, namely, little direct sunlight can’t access to indoor, day lighting is from diffuse and reflected; however, when it is in the winter-half year (October to march), may be in the control of part direct sunlight to enter indoor in order to improve the indoor temperature, but this still should avoid excessive direct sunlight to enter indoor lest interference of cross bright glared. when parts can be through sunshine, blade can exist between them to keep out of mutual problems in order to make the photovoltaic cells produced the greatest of generating capacity, we should try to make the sum which is trend to 90 degrees in blade Angle B and the vertical shadow Angle of VSA, it is equivalent to uniaxial tracked the sun light (highly direction). Sunshade coefficient can determine according to thermal needs in the winter-half year. Shading coefficient is connected with leaf breadth, spacing and the Angle. This paper are based on the winter solstice (usually in a December 22) and noon shading of coefficient to meet requirements as a benchmark to carry on the design, this set was 60% at the moment of sunshade coefficient. The calculation of noon VSA in the winter solstice is 26. 7 °and the blade Angle B is 63. 3 °, as the 300 wide of blade has determined, the blade spacing D with 560 mm can meet the requirements by coefficient. As shown in figure 3-11 below. When leaves spacing D is determined, we can be used to calculate the winter-half year of blade Angle by each hour according to B + VSA = 90 °. The coefficient SC is B/Dcos VSA at this time, this type of B is for leaf breadth. Along with the dates from the winter solstice become more far, while VSA is the bigger, the SC is also bigger. Namely, the winter solstice coefficient of shading become the minimum, light transmittance is the most big and can get the most of the radiation in the sun, it meet the demand heating and this also is the cause to meet the design requirements for the benchmark based on above-mentioned in the sunshade coefficient of the winter solstice. 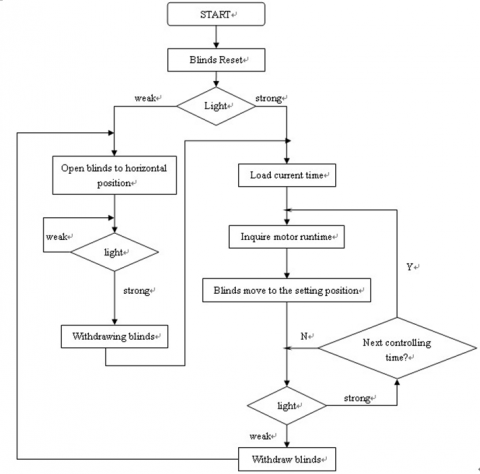 In the summer half a year, sunshade coefficient SC can be closed to 100%, it can’t keep out between blade and cannot play photovoltaic cells of power capacity to achieve the most generating capacity, we should make B + VSA = 90 °as to finish this point, parts of the single axis in the photovoltaic cells tracks point-blank the sun's rays at this time, a small part can be keep out by the top leaves to accept scattering and reflected radiation. The track of sun changes in a day, but we need adjust a blade Angle every once in a while, it realizes that the basic uniaxial tracked the sun; this article take five time to adjust Angle and need to five Angle value every day. But the sun in the relative changes of trajectory between the next day is very slow, as to calculate and stored in a computer from the point of view of the value for inquires, it is necessary to transform a Angle value each week (this article totally 5). With the typical winter solstice based on calculation every year, calculating a design value is every 7 days.

Shade leaves can block direct sunlight and adjust the indoor illumination, but cloudy day or when the sun obscured by clouds outdoors, it is not expected that indoor illumination is too low. Now the leaf must be unfolded in order to make it in the horizontal state (i.e. B = 0). The aim is to reduce the impact of indoor illumination. Photosensitive devices can be used to test the outdoor light intensity. When its data is below the set threshold, the controller drives the motor to make the leaves move in order to meet the design requirements.

T89C2051 outstanding features MCU ensure the needs of this circuit. Its port P1 and P3 can be used as input ports and output ports. In this circuit to P1. 0 mouth to receive the photosensitive resistors and Schmitt toggle consists of the signal input portion of signal receiver mouth, P1. 1 mouth, P1. 2 mouth as a signal output, control, and the connection of relay, which drive motor controller and motor (at the same time more than in parallel. When the leaves and the motors are of a large array, the motor should be staggered batches start in order to avoid the impact of power, then you can use other ports, such as PI. 3, P1. 4 output control signals such as batches. Circuit shown in Figure 4

When the P1. 1 output high and P1. 2 output low, conduct T1, cut-off T2, relay KA act, its normally open contact closure, A ends 24V output voltage, the drive motor controller open (c )end, and open the blade. Similarly, P1. 1 output low, P1. 2 output is high, the relay KB action, its normally open contact is closed, B-side head 24V output voltage, the drive motor controller close (c) side, and close the leaves. When P1. 1, P1. 2 are low, A, B ends are not connected to 24VD power supplies, motor controllers aren’t controlled by the SCM. When P1. 1, P1. 2 are high, A, B ends are connected to 24VD power supplies, motor controllers are controlled, but remain stationary, see next section circuit, in order to avoid malfunction, it should be avoided that P1. 1, P1. 2 are high there. 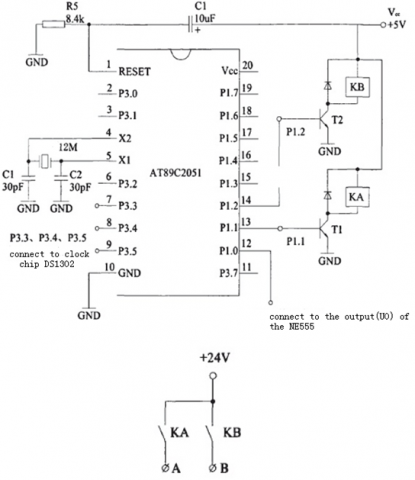 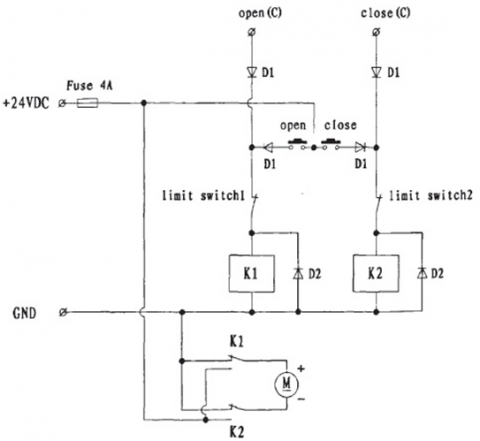