In this paper, the design of two degree of freedom controller for ball and beam system is proposed. The Quantitative Feedback Theory (QFT) constraints are used to design two PID controllers to stabilize and compensate the nonlinear system with robust stability, robust performance and more desirable time response specifications. A multi objective cost function is proposed in this work to represent the function of QFT. The Black Hole Optimization (BHO) technique is a useful method to automate the design procedure of the proposed controller. The results of simulation indicate that the suggested optimal quantitative PID controller can give a desirable performance in comparison to other controllers designed in previous work.

Quantitative Feedback Theory (QFT) is an engineering methodology, which was developed by Horowitz (1960). It was designed to achieve the closed loop system requirements in the presence of system uncertainty. The fundamental idea is to convert model needs and plant uncertainty into open-loop, which are then used to construct a controller using the gain-phase loop shaping approach [1, 2].

On the other hand, PID controller is still the most significant controller, which is commonly used to solve many control problems. The ability to make the PID controller with automatic tuning, automatic development of gain schedules and continuous adaptation has renewed interest in PID control [3]. One of the fixed structure controllers is a PID controller whose structure has been selected independently of the plant order [4-6].

Many control approaches have been used to control the system using a variety of design methodologies. Mehedi et al. [7] in 2018 proposed Fractional Order PD Control (FOC) to control the ball position. Ali et al. [8] in 2018 proposed PID controller to stabilize the system, PSO method was used to tune parameters of the controller. Shah et al. [9] in 2018 proposed LQR controller to control the system. Tahir et al. [10] in 2019 Proposed PID controller to control the system where the parameters tuned manual. Abdul Aziz et al. [11] in 2019 proposed a fuzzy PID controller for the system and the output reference is modified as required by applying a model reference at the input. The changes of system parameters did not taken into account. Tsoi et al. [12] in 2020 proposed a Genetic Algorithm (GA), the purpose of GA is to improve an extra layer of fuzziness. Many objective functions were analyzed to develop the performance of cost matrix ITAE, IAE and ISE. Two events bring the optimum parameter search to a close. The first was the achievement of the highest number of chromosomal generations, and the second stage was determining the optimal controller parameter solution. The result of ITAE cost function was better than the other cost functions. Amirudin and Kadir [13] in 2020, the location of the ball on the system was controlled using adaptive PID (Q-PID). The (Q-PID) was compared to traditional PID and heuristic PID controllers techniques. It was discovered that the adaptive PID which based on Learning, was better than conventional PID and heuristic PID controller techniques. 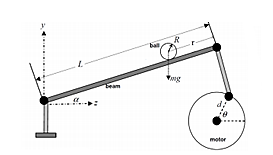 The ball and beam is one of the mechanical systems which is commonly related to actual control issues, such as horizontally stabilizing the aircraft at the landing and turbulent airflow [14]. The system consists of the ball, beam and the ends of the beam are attached with level arms The motor's output gear is attached to one of the level arms and the other level arm, which is fixed. The drawback of this configuration is that it necessitates a more excellent analysis of the mechanical components. It has high nonlinearity and uncertainty parameters [15, 16]. Figure 1. shows the system.

The following dynamic equation is created using the Newton method as [17]:

where, J is moment of inertia, R is radius of the ball and $\ddot{r}$ is by the double derivative of its translational motion.

The force due to ball rotational is given From Eq. (3) as follow:

The relationship between the beam angle (α) and the servo motor angle (θ) is shown in Figure 2. This relation can be represented using the geometry and trigonometry of the level arm section [18].

Figure 2. The beam angle and the angle of servo motor [18]

By analyzing the vector (d), the following two components are obtained:

After subtracting OX from OS, the length of XS is obtained as:

By analyzing the vector (L), the following two components are obtained:

By analyzing the vector (A), the following two components are obtained:

Then subtracting QM from QN, yields:

By multiplying both sides of Eq. (17) by arcsine, yields:

By multiplying both sides of Eq. (19) by arcsine, yields:

Then, the relationship between the beam angle (α) and the servo motor angle (θ) can be expressed by:

where, d is the level arm, L represent the beam length, α(s) is the beam angle, and θ(s) is the gear angle.

The electric equation for the motor is given as [17]:

From Eq. (9), the relationship between the motor angle and voltage of the motor can be obtained as:

The parameters of the ball and beam system are given in Table 1.

Black Hole optimization is the population based approach to some mechanisms to solve the problem [19]. To implement Black Hole, initial population must be generated, and then the value of fitness is calculated for each candidate. If the candidate has a best fitness namely Black Hole, and other namely stars, stars that surround Black Hole can be absorbed by Black Hole [20].

The following is the formula for star absorption by a Black Hole [21]:

where, xs represent location of star solution and xb represents the black hole.

When the stars move toward a black hole, they may also exceed event horizon. Each star that passes over event horizon of black hole will be pulled in [22]. A candidate (star) being pulled into the Black Hole, A new candidate solution (star) is created and scattered at random throughout search area, and the new search is initiated. After all of the stars have been relocated, the next iteration begins. In the Black Hole algorithm, the radius of the event horizon is determined using [23]: 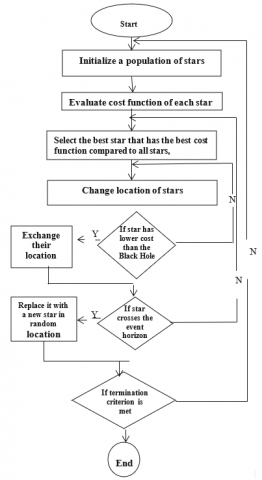 In this section the procedure to design the proposed optimal quantitative PID controller is given.

The proposed controller parameters are tuned by BHO subject to Quantitative Feedback Theory (QFT). The suggested objective is to satisfy the following QFT requirements:

To satisfy this constraint the following variation must be minimize:

2. To achieve the robust stability for the controlled system by considering [24, 25]:

where, K(jw) represent the controller and Mr represent a constant which is obtained according to the desired gain margin and phase margin. They are given as:

4. To achieve good disturbance rejection by minimizing the sensitivity function.

From all previously mentioned QFT constraints, the following cost function can be proposed:

where, K1(s) and K2(s) represent the inner loop and outer loop controllers.

where, kp1, ki1, kd1, kp2, ki2, kd2, represent the controllers' parameters and τ1, τ2 are the time constants of the prefilter which are tuned by BHO method subject to QFT constraints as shown in Figure 6.

Figure 4. Block diagram of the controlled ball and beam system

where, K1(s) and K2(s) represent two controllers to be designed, F(s) is the prefilter, rd is desired position and r is actual position.

The setting of the Black Hole Optimization method to obtain the optimal parameters of the controllers is given as:

After tuning the controller parameters by Black Hole Optimization subject to Quantitative Feedback (QFT), the controllers and prefilter are obtained as:

The desired performance requirements have been satisfied by applying proposed controller. An achieved time response specifications are: rise time equals 0.9 sec, settling time equals 1.8 sec, and overshoot is zero, as shown in Figure 7. This means that the constraints of QFT represented by Eq. (36) have been achieved. It is clear that the resulting steady state error is zero which is the main advantage of the integral term in PID controller. The nominal system lies between the desired upper tracking and lower tracking boundaries. Figure 8 shows the time response of the system. 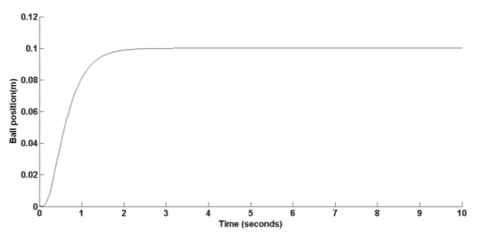 Figure 8. Time response of the system

The obtained control signal is shown in Figure 12 it is shown that a low control voltage is required to control the ball and beam system. Table 2 contains a comparison between the Optimal Quantitative PID Controller and fuzzy PID controller.

It is shown that the suggested optimal quantitative PID controller can achieve a desirable performance. 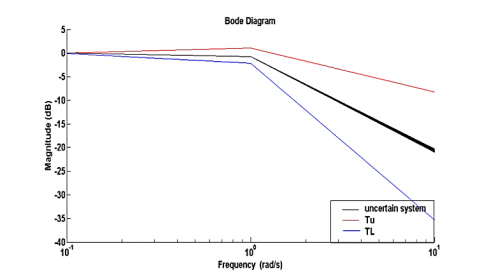 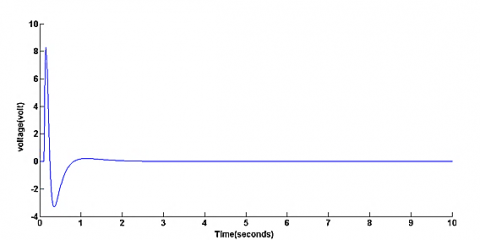