The automatic train driving (ATD) can greatly improve the efficiency and safety of train operations in urban rail system. This paper mainly establishes a multi-objective optimization model and designs a fuzzy controller for the ATD. Firstly, the relevant parameters of train operations were analyzed, including, safety, punctuality, parking accuracy, passenger comfort and energy consumption. Then, a multi-swarm optimization algorithm was developed to optimize the train operation curve, coupling the particle swarm optimization (PSO) and the cuckoo search (CS) algorithm. Taking the optimized curve as the input, the author finalized the design of the fuzzy controller. The simulation results show that our method can effectively solve the multi-objective problem of the ATD in urban transit system.

The current urban transit systems generally operate at a high speed and a high density. This operation mode calls for advanced management and control systems. One of such systems is automatic train control (ATC), which integrates the technologies on control, rail traffic signal and communication into automated traffic command, control and management.

The first step to design such a method is to solve the automatic train driving (ATD) problem [1-3]. The ATD refers to the automatic start-up, acceleration, deceleration, cruise, parking and return of trains under the given schedule without driver intervention.

This paper firstly describes the ATD system, and reviews the existing ATD optimization algorithms. Then, the multi-objective optimization of the ATD was analyzed, and a novel smart control algorithm was developed for train operations in urban transit systems. After that, the author set up a multi-objective optimization model for the ATD and created a fuzzy controller. Finally, the control performance of our model and controller was verified through simulation experiments.

In recent years, much progress has been made on the ATD. For example, Shen et al. [4] investigated passenger satisfaction in train operations of the urban rail system, established a calculation model for this factor, and optimized the multi-objective ATD problem with DE algorithm. Cao et al. [5] adjusted train operations between stations by fuzzy ATD control method.

To minimize travel time and energy consumption, Domínguez et al. [11] proposed a multi-objective PSO to optimize the velocity curve of the ATD, and found that the algorithm converged to the Pareto frontier solution under constraint conditions, which means the algorithm has diversity and convergence than Non-dominated Sorting Genetic Algorithm II (NSGA-II). Carvajal et al. [12] developed a fuzzy NSGA-II algorithm to analyze the relationship between travel time and energy consumption of trains, and obtained a novel train control strategy.

Compared with the track length, the length of a train is so short as to be negligible. Here, each train is considered as a particle, and a single particle model is constructed to analyze the stress pattern of the train operation. The traction, braking force and resistance of the train were computed separately by the model.

According to Newton’s second law of motion, the differential equation of train particle motion [19] can be defined as:

where, $c$ is the unit resultant force of traction; $\varepsilon$ is the acceleration coefficient; $v$ is the speed; $s$ is the travel distance; $t$ is the travel time.

By the differential equation of train motion, the speed-distance curve of the train in the whole travel interval can be drawn, and the speed change of the train running can also be monitored.

The resultant force of the running train can be expressed as:

The greater the load of the train, the greater the braking force. The acceleration produced by the resultant force $a =$ $F / m ,$ indicating that $a$ will remain unchanged if $F$ and $m$ increase in the same proportion.

The running train mainly suffers from two external forces, namely, basic resistance g(v) and additional resistance w(x,v). The former is the result of multiple factors, such as the friction and impact between locomotive and rolling stock, between train surface and the air, and between wheels and the rail. During train operations, the generation of basic resistance is extremely complex, making it difficult to compute the basic resistance theoretically. Thus, this paper computes the basic resistance by empirical formula:

where, $v$ is the train speed; $a , b$ and $c$ are three constants, representing the coefficients of the basic resistance.

The ATD also requires precise parking operation. The parking accuracy KC of the train can be defined as:

where, S is the actual travel distance of the train between stations; Sad is the distance between adjacent stations.

According to the train motion equation, the travel time between stations can be calculated by:

The punctuality of the train Kt can be defined as:

Passenger comfort is another key index of the ATD performance. The index value can be measured by the change rate of acceleration, which is affected by impact rate and travel time. Here, the passenger discomfort Kj is defined as:

where, a is the acceleration of the running train; t is the travel time. The smaller the Kj value, the more comfortable the passengers feel.

The PSO combines the merits of heuristic random search and several other intelligent algorithms [21]. Unlike many other intelligent algorithms, the PSO has no crossover, a simple computing process and a strong global search ability. In this algorithm, each particle retains its best-known position p_Best and the global best-known position g_Best, and continuously moves toward the global optimal position by exchanging information with other individuals and groups. The particle velocity and position are respectively updated by:

The CS algorithm basically involves three operations: selection of the best nest, random local movement, and random selection in global flight. Firstly, the best nest (optimal solution) is preserved to control the search within the domain of local optimal solution. Next, the optimal solution is searched for by local random movement $x ^ { t + 1 } = x ^ { t } + \alpha \varepsilon _ { t }$. Finally, the step size is determined by Lévy flight [22], aiming to diversify the solutions in the search space. The position update formula of Lévy flight can be expressed as: 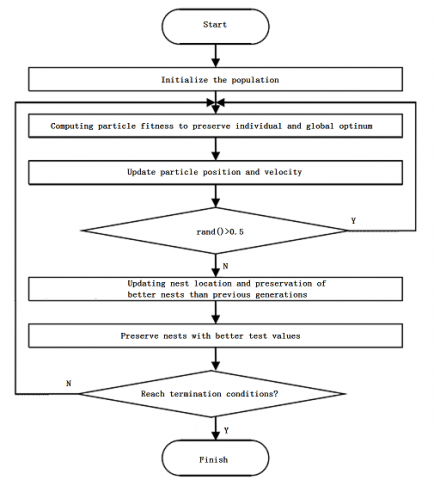 Figure 1. Flow chart of the PSO-CS

The PSO and the CS each has its own strength. In the PSO, the particles can quickly converge to the global optimal position by comparing its current position with the best-known positions of itself and the swarm. In the CS, the optimal solution is always retained in the next generation, rather than be expelled from the population. In this paper, the two algorithms are integrated into a hybrid algorithm (PSO-CS), giving full play to their respective strength. In the hybrid algorithm, the particle positions are updated iteratively by the PSO, and then further optimized with a certain probability by the CS. The workflow of the PSO-CS is illustrated in Figure 1 below.

The above problem can be converted into single-objective optimization problem by weighted summation method:

The f value is negatively correlated with the control effect. In the PSO-CS, the reciprocal of the f value was taken as the fitness evaluation function:

Figure 3. The design of fuzzy controller

As shown in Figure 3, our fuzzy controller has two inputs and one output. The inputs and output were separately fuzzified and divided into 7 fuzzy sets. A total of 49 fuzzy rules were designed.

The fuzzy set is the result of fuzzy reasoning. The center of gravity method was adopted to transform the fuzzy result into an exact value. The transform formula is as follows:

where, vk is the exact value of control output;  uk(vk) is the corresponding membership. The membership function is shown in Figure 4.

To verify the effect of the fuzzy controller, the PSO-CS, the PSO and the CS were adopted to optimize the train operations. The optimization results of the three algorithms are listed in Table 2 below. 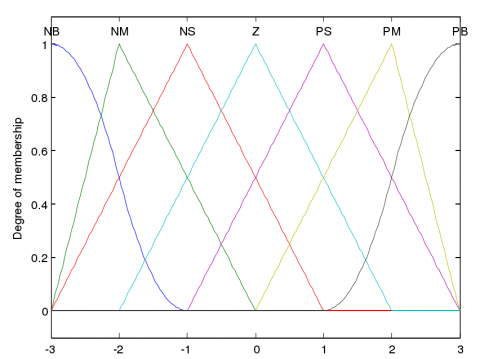 From Table 2, it can be seen that the PSO-CS and the PSO both converged to feasible solutions satisfying all constraints in the 100th iteration. The results demonstrate the convergence quality and speed of the PSO-CS. After 500 iterations, the PSO-CS achieved higher total fitness than the contrastive algorithms, indicating that our algorithm boasts the best effect of multi-objective global optimization and the optimal control effect.
5. Conclusions

This paper examines the functions of the ATC system and analyzes the indices of ATD optimization, namely, safety, punctuality, parking accuracy, passenger comfort and energy consumption. On this basis, the train operation curve was optimized by the multi-swarm optimization algorithm, coupling the PSO and the CS, and a fuzzy controller was designed to use the optimized operation curve as the input. The simulation results show that our method can effectively solve the multi-objective problem of the ATD in urban transit system, and outperform the traditional optimization algorithms like the PSO and the CS.