The crowd behaviour recognition system is a subsystem of a distributed cooperative adaptive evacuation guide system, and it detects and forecasts crowd flow and anomaly occurrence by using machine learning method such as deep learning with visual and depth information obtained by RGB-D camera. The distributed cooperative adaptive evacuation guide system aims to suggest evacuation routes at extensive evacuation situations by autonomously cooperation among plural sensors and evacuation guiding devices. In this paper, a recognition method of overall behaviour of the crowd is proposed. Some indices for indicating the situation are examined in order to recognize the overall behaviour of the crowd flow and the anomaly occurrence, and cooperate among the system by sharing the recognition results rapidly.

In this study, the crowd behaviour recognition system monitors the overall behaviour of the evacuating crowd instead of monitoring each evacuee’s behaviour independently, because the objectives of the system are detection and estimation of the crowd flow status and the anomaly occurrence. The proposing system focuses on the crowd flow and the density. Conventional methods of the human behaviour recognition detect each person and analyze his or her behaviour independently, and the computational time cost is concerned for processing massively crowd in real-time rapidly, but the proposing system resolves the concern.

The congestion degree, CD represents a congestion situation in an image as a numeric value calculated as the following equation by using distance to subjects obtained by the depth information. Where n is number of subjects, si is area of, and di is distance to each subject. 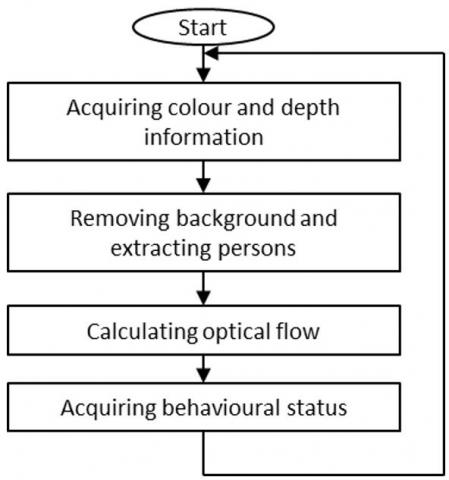 In this study, a situation of crowd that does not occur in normal, such as congestion by people concentration or flood of people to one direction, is defined as the anomaly situation. Normal behavioural status is able to learn by collecting many normal situations, but anomaly behavioural status is difficult to learn due to difficulty of collecting anomaly situation with low occurrence frequency or unexpected situation. Therefore, the outlier detection is performed on the latent space distribution of the time series behavioural status to determine normally / anomaly. Real-time anomaly detection and forecast of anomaly occurrence are performed.

Anomaly detection is performed by combing the Long Short-Term Memory (LSTM) encoder with the Mahalanobis distance [2-4]. Figure 2 shows the procedure of the real-time anomaly detection. The latent variable is obtained by translating the time series behavioural status of past 15 frames to feature vectors using the LSTM encoder. The outlier detection using the Mahalanobis distance is applied to the dataset of the latent variable. If an outlier is detected, it is judged as an anomaly situation.

The LSTM encoder is used for translating the time series behavioural status to the latent variables. The LSTM is a neural net realizing long-term memory [5, 6] and the LSTM encoder obtains the feature values of input.

The Mahalanobis distance defined as the following equation is a multi-dimensional distance which takes account of correlation. Where μ is a mean vector and Σ is a variance-covariance matrix.

New data x is judged to be an outlier when the following equation holds. Where θ is a certain threshold. 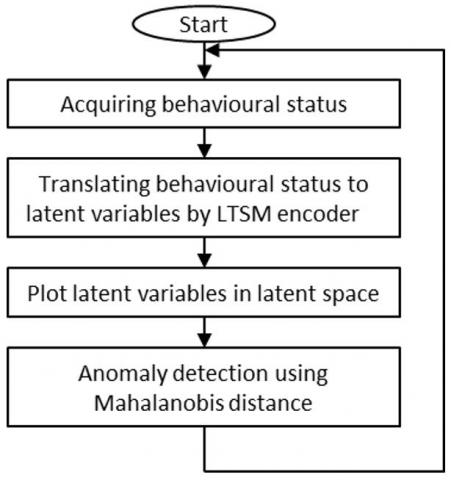 In addition to real-time anomaly detection, by forecast the occurrence of anomalies in the situation after several frames, appropriate evacuation guide can be performed before congestion occurs. Therefore, indicators of behavioural status after several frames are forecasted by using the deep learning. 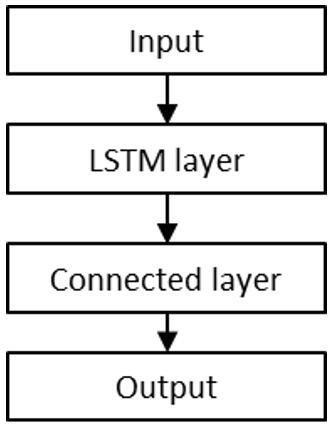 The congestion degree was forecasted by using the learned network and the results were visualized. Input video data for verification was obtained at the same conditions of learning data. Figure 4 shows the forecast and the measured value of congestion degree. The red line represents the measured value and the blue line represents the forecasted value. From the results, peak value was not forecasted but up and down fluctuation was well forecasted. 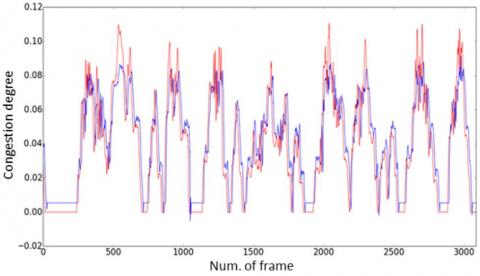 Anomaly detection algorithm is applied to the crowd flow and the behaviour of the crowd when anomaly is detected is verified.

The threshold of Mahalanobis distance used for anomaly detection was set using 3,100 frames with the same content as the video #1. Table 2 shows the number of anomaly detected in each video. The number of frames in which anomaly were detected throughout the entire movie was 7,281 out of 18,600 frames.

In this verification, the video #3 was a video that assumed an anomaly, but anomalies were also detected in the video #1 and #2. The reason was assumed that some outlier values were contained to the indices input to the LSTM encoder.

Figure 5 shows an excerpt of the area around the point where an anomaly was detected in the congestion degree. An anomaly was detected at the red point. Anomaly is judged by the input values of the past 15 frames. It can be confirmed from Figure 5 that the input values up to the point where the anomaly was detected contained outliers and sudden changes. It is considered that such outliers or sudden changes occur when a person in the shooting area is hidden. When there are a lot of people in the shooting area, a person who was hiding in the previous person in one frame appears in the next frame and then hides in the next frame, or the similar situation also occurs when people walking in opposite directions overlap.

Table 1. Contents of video for verification 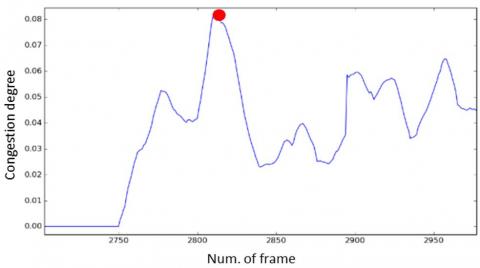 Figure 5. An excerpt of the area around the point where an anomaly was detected in the congestion degree

By comparing Figure 6 (a) and (b), it confirms that there is a clear difference in hue and brightness. The reason why this optical flow is confirmed is that the colour of the clothes or the hairs of the persons were similar. Since the optical flow is calculated with a grayscale image, if the object is a similar colour and its position is continuous, the destination estimation may be incomplete. For this reason, it is considered that there was a difference between frames in the detected movement direction and movement intensity even in the frames that shot a person moving at almost constant velocity.

A sudden change in the optical flow was also confirmed in the scene where only a part of a human body was reflected in the shooting area. In the lower left corner of Figure 6, you can see a person's arm swinging down. If the time series behavioural status includes a sudden change, it is judged as anomaly even in the normal state, so it is necessary to prevent the sudden change from being contained in the normal state. In the future, countermeasures for this problem must be considered. 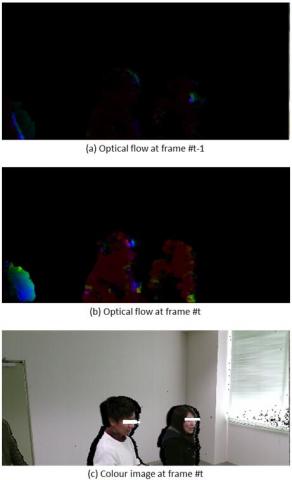 In this paper, two functions of the crowd behaviour recognition system, the behaviour recognition and the anomaly detection, were examined. At the examination of the behaviour recognition, four indicators for recognizing the behavioural status were proposed. Due to avoid the effect of luminance variation, the depth information obtained by RGB-D camera was used for the frame difference method to remove the background and extract persons. And then the movements of extracted persons were estimated by using the optical flow method. Based on the indicators of the time series behavioural status, forecast of the congestion degree by using the deep learning was tested and up and down fluctuation was well forecasted. At the examination of the anomaly detection, an anomaly detection algorithm by using the LSTM encoder with the Mahalanobis distance was tested and several challenges to improve the detection accuracy were clarified.