In recent years, with the increasing mining depths and the improving mining mechanization, heat hazards have been becoming more frequent and serious in underground coal mines in China. In some coal mines with a mining depth beyond 1000 m, the dry bulb temperature at the working face can reach 40 °C and the relative air humidity is up to 90%~100% [1]. Heat hazards to miners at the working face in underground hot coal mines in China have been therefore becoming more severe these years [2-4].

In underground coal mines, miners are working in a microclimate which consists of air, the working uniform and human body, while the working uniform is the thermal-evaporative transmission medium between human body and the microclimate. Thus, the thermal transmission capability (thermal insulation) and the moisture transmission characteristic (evaporative resistance) of the mining uniform are significantly important to keep the thermal balance for coal mine workers. At present, in the study on the evaluation of heat stress in hot coal mines, the thermal insulation (TI) and the evaporative resistance (ER) of the mining uniform are generally empirically given according to other similar clothes [5-9], and the TI and ER of the entire working ensemble (including coats, trousers and leather boots) are still not accurately and objectively acquired. Therefore, the determination and analysis of TI and ER of the working ensemble for hot coal mines in China are necessary and of great importance for the thermal safety and thermal comfort assessment.

Because of the differences between individuals and the difficulty in measuring heat-moisture dissipation of human body accurately, measurement of TI and ER using thermal sweating manikin is currently becoming the internationally-popular approach, especially for the working ensemble or uniform. This measurement technique is objective, accurate and repeatable [10]. In the past decade, many researches employed the thermal manikin to measure and analyze many kinds of clothes, such as Firefighters’ protective uniform, anti-static clothing and so on [11-13].

Measurement Technology Northwest developed an advanced thermal sweating manikin named “Newton”, which imitates the human body heat condition objectively [14]. This system divides the body model into 20 or 34 individual thermal controlled parts and manikin sweeting skin was made of detachable fabric and hence localized thermal insulation and evaporative resistance can be gauged. “Newton” has been widely used to determine many kinds of working ensembles [15].

A 20-zone “Newton” type thermal manikin was used in the measurement. Each zone of “Newton” has independent heating and sensing system which is a thermostatic constant power system. The sweating skin system consists of 20 individual water components which control sweeting pace by valves and external pressure pump which is detached from the manikin body. The working and controlling system of “Newton” is shown in Figure 1, and the 20 individual body zones of Newton are listed in Figure. 2. Thermal and water vapor accommodation of “Newton” is controlled by the ThermDAC software installed in a computer. ThermDAC can control the operating temperature, heat release and volume of perspiration individually and undertake the measurement, manipulation, record and transmission of experimental data simultaneously [14]. 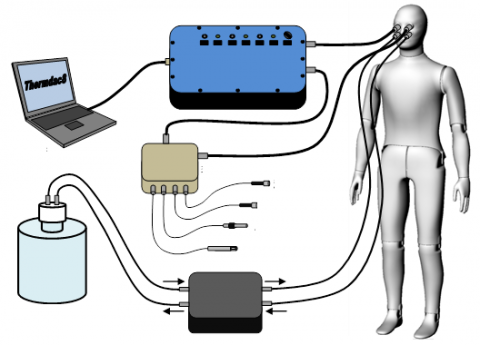 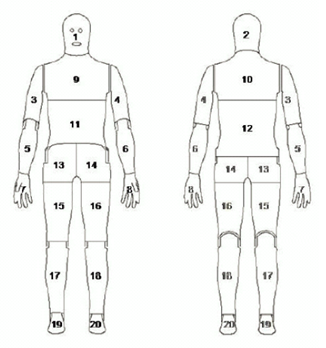 All tests were conducted in a climatic chamber of 6 m long, 5 m wide and 2.7 m high. The temperature and relative humidity can be controlled at 18~48°C±0.5°C and 30~90%±5% RH. The climatic chamber is isolated from the outdoor environment so that the heat exchange with external environment would be minimized to the lowest level. There are 10 thermocouples (WZP-PT100, China; accuracy: ±0.1°C) placed in the chamber to detect the experiment temperature and there are several humidity sensors (AM-101, Japan; accuracy: ±3%) scattered in the middle of chamber to detect experiment humidity.

Test samples are one new mining ensemble and a 1-year-worn mining ensemble (both collected from Jining Anju coal mine, a typical hot coal mine in China), and both of them include coats, trousers and leather boots. Since the controlling circuit was arranged on the head of the manikin, safety helmet for miners is not available to measure by the thermal manikin, and therefore the thermal insulation and evaporative resistance of safety helmet were not measured in this experiment. The experimental sample and the test setup is shown in Figure. 3 and Figure.4 shows the snapshot of measurement setup with ThermDAC of “Newton”. 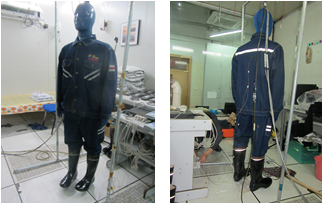 Figure 3. Measurement setup in a climatic chamber with “Newton” manikin 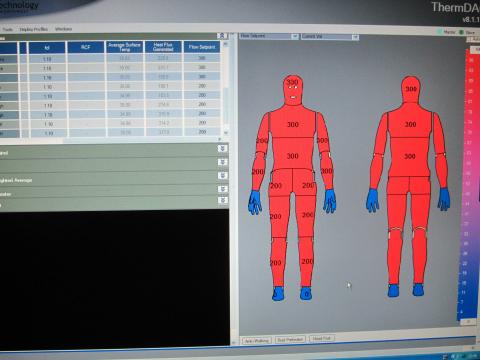 Figure 4. Measurement setup with the ThermDAC of “Newton” manikin

where, N is total number of manikin zones; $a_{i}$ is the ratio of the corresponding zone area to total area. Another commonly used parameter is basic thermal insulation which is the total thermal insulation calculated from skin surface to clothing surface, and it is calculated as follows [16]:

The local evaporative resistance is calculated based on the following equation [16, 17]:

where, $R_{e t, i}$ is the local evaporative resistance (Pa m2/W), Pskis saturation vapor pressure (Pa) corresponding to the skin surface temperature, $P_{a}$ is partial pressure (Pa) of ambient water vapor, $Q_{i}$ is the total heat exchange (W/m2 ) between the manikin and the ambient environment.

where, RH is relative humidity in the testing chamber. Total evaporative resistance and basic water vapor resistance calculated in serial and parallel way could be derived from equation (3) ~ (5).

Most types of clothing ensembles have openings, e.g. collars, cuffs, which allow a certain air exchange with the environment. This air exchange can increase, changing the thermal insulation of the clothing when the work is performed. This is called the “pumping effect”. Also, the wind can enter through the openings, increasing the air exchange of the microclimate air with the external environment. As a result, thermal insulation moisture transfer ability of the clothing can be reduced by the movement of human body or the air velocity. Havenith et al. (2004) proposed a widely used formula to determine the dynamic thermal insulation characteristics of clothing as described in Equation (9) [18]:

The testing temperature for the thermal insulation of the mining ensemble in the climatic chamber was 25±0.3°C and the relative humidity was 55%±3%. Air velocity was less than 0.2 m/s. We measured the thermal insulation in the conditions in which manikin wore fabric skin only (nude) and wore mining uniform, respectively. In this experiment, we set the surface temperature of “Newton” constantly as 35°C and the operation mode of the manikin is non-sweating. Considering the uncertainty in the experiment, every experiment lasted 60 minutes and the terminal temperature and heat flux recorded at one-minute intervals after heat output of each zone was steady for 30 minutes. Furthermore, we conducted every experiment for four times, and selected the best three results and then take the average of these three measure data as the final measurement value. The calculation of thermal insulation was based on 18 body zones except the head zones (zone 1 and zone 2).

Figure 5. The local thermal insulation of each zone

Figure 6. The local evaporative resistance of each zone

Secondly, considering the extreme thermal and humid conditions in the underground coal mines, we also investigated the effects of ambient temperature and relative humidity on the thermal insulation and evaporative resistance of the mining ensemble.

According to the measurement principles and procedures, the evaporative resistance of the mining ensemble is also measured under a certain temperature at 30±0.3°C while with the relative humidity changing as 55%, 70%, 80%±3%, and the air velocity was less than 0.2 m/s. The measured and calculated (in serial way) results are listed in Table 3. It is found that the total evaporative resistance of the mining ensemble changes significantly at different relative humidity. 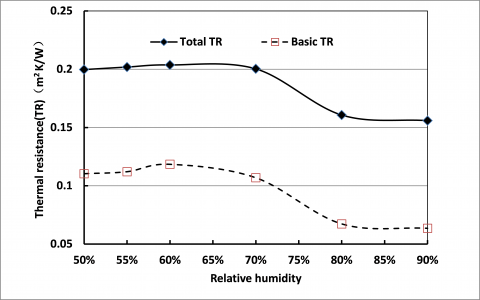 Figure 7. The thermal insulation changes with the relative humidity 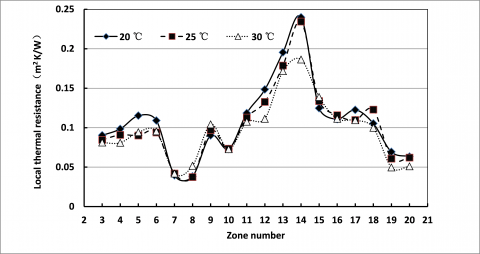 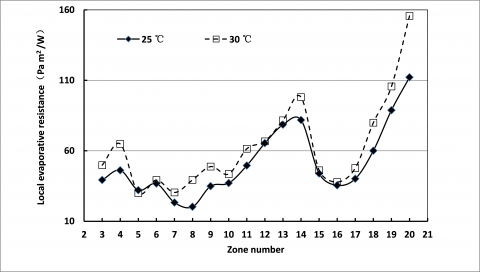 Figure 9. The local evaporative resistance changes with the testing temperature

In this study, the thermal insulation and the evaporative resistance of working ensembles for Chinese coal mines were measured and analyzed under standard thermal conditions and humid conditions, and furthermore examined when testing environmental conditions changes. It is found that:

a) The thermal insulation of the old mining ensemble worn for one year changes slightly from the new one, but the evaporative resistance decreases about 15%.